Sometimes when you break your glass a 'flair' is left behind.   This usually occurs when too much pressure is applied while breaking the glass.   On large cuts the adjustment screw on your running pliers will help prevent these flairs but there's really no way to prevent them while using breaker/grozier pliers.  When you see these flairs you MUST grind them down.  These happen often while cutting borders especially if the piece your are removing is small.  When I tell students to 'skim' their border pieces on the grinder it means to apply a light but firm pressure against the grinding wheel on each edge of the glass.  That said, you must also remove the flairs that the red arrows below are pointing to.  These appear small and inconsequential, but they make big problems later one when squaring and sizing your windows.  As I always say, "Everything counts in large amounts." 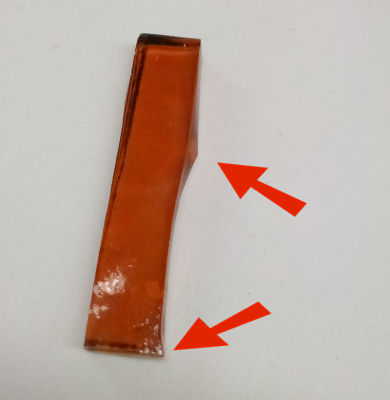 So first up we have Melissa's Round Cardinal window featuring a background made out of a type of glass known as fractures and streamers (for obvious reasons).   Used in a window like this it is absolutely perfect since it makes you think of assorted fall leaves in trees behind the birds.  Stunning. 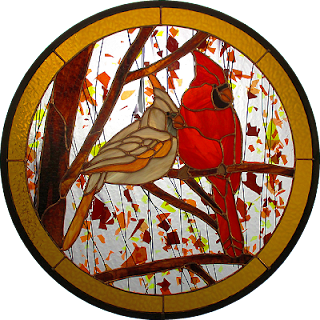 The there's Martha who completed her Pelican Window which also looks great.  She had a hard time picking out the colors for the double border but what she ended up choosing blends perfectly with the clouds in the sky which in turn ties everything together. 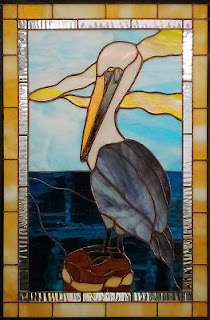 Jan loved the pattern she saw for this window but it was simply too tall for her needs so we chopped it almost in half and redrew the bottom section to make it more appealing to its new size.   Now that it's been completed I can honestly say that Jan did a wonderful job with the colors as well as with the rest of the work on this stunning window. 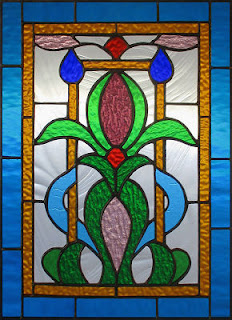 This is Mary Grace's Hoop Owl.  Made entirely out of scraps this little guy will easily brighten up any room he hangs in.  This is also the first example of a Hoop Project not completely residing within the hoop.  Mary Grace has yet another project that will similarly 'burst' through the confines of the hoop that we'll see shortly. 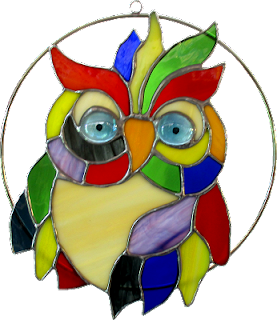 Angie can make these Heart/Rose/Cross Panels in her sleep now.  This is a window that proved to people that although the border and the heart/rose are both red they don't have to be cut from the same sheet of red glass.  In fact, it's almost always nicer to have a subtle difference in colors (or textures) between objects.  The roughly textured red border and the smooth red heart prove that fact in Angie's window very nicely. 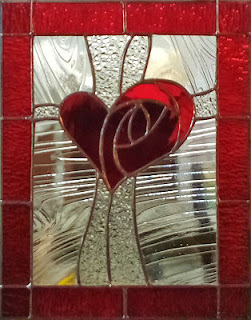 Next we have 2 more hoop projects, these having been made by Linda L.  This is the first pair of four Butterfly Hoops that Linda is making  so expect to see two more in our next post.  And yes, these Butterflies are confined to their respective hoops. 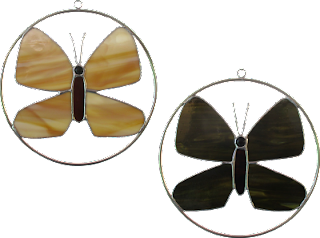 Ann's made some major headway on her Angel Hand mirror.   With everything ground and foiled Ann is ready to tack this, cut the mirror for it, and then finish it all off with a nice coat of solder on the front and back of this stunning Angel.

I absolutely love Shelley's background glass and I'm jealous that I didn't find it in the rack before her because they don't make it any more and this is (almost) the last time we'll see this wonderful color.  That said it works perfectly in this window so I'm thrilled that the last time we see this glass will be in a window that looks this good. 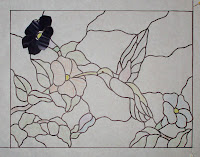 I know it's hard to see right now but Kerry is working on another bird in another pentagon.  It's tiny so the details will emerge after he begins grinding the bird's face which he is almost up to already since he's got it all cut out already. 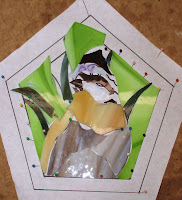 Speaking of birds, this is Jan's next project.  She's begun cutting a Pelican and Sun Panel and is now ready to begin grinding it for a perfect fit. Don't you just love that water?  Yes, it's the last piece of the same glass that Shelley used in her Flamingo Window. 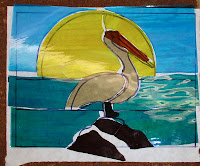 This week we got to see Sheri cut out the amber body portions of her Yoga Chakra Window, the blue sections at the bottom, as well as the heavily textured lotus-like ring that surrounds the meditating individual.  This is a very spiritual window indeed! 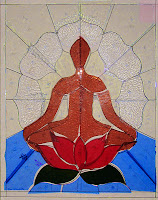 And this is the start of a Feather Suncatcher that Martha has begun working on.   Next week she'll begin work on a wedding box -- this is sort of an in between project from her.

Well it's official.  Mr. Bingle has all of his glass cut out and attached.   The first thing Cheryl did was to add the final amber border and then she was able to fill in the three or four missing  pieces which means that she'll begin soldering this when she comes back in.  there doesn't appear to be all that much to solder here but it's a BIG window so it will take some time. 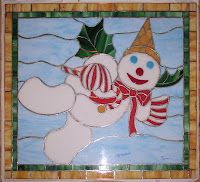 Those Texas Boots of Judy's are almost set for walking!   She's got the front side soldered and will hit the back side when she comes back in so these are going to be out the door before you know it.   There's absolutely no mistaking what this window is when you look at it now. 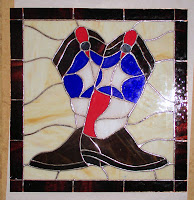 Annette didn't care for the grey glass that she had used for the cap of her Atlanta Falcon's Skull Window so she changed it to a heavily textured black glass instead.  Once that was ground and attached she got her background cut out, ground and wrapped.   That means this will surely get a border added to it when we see Annette next. 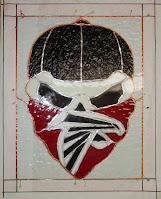 With only a few fill in pieces left to cut Linda F made excellent progress on her spring time Watering can/Flowerpot Window.  She specifically cut out the sky that resides between the wooden porch posts from one piece of glass so that the pattern in the glass would be maintained across the stretch of the window to make it look completely natural.  We used a few other tricks to achieve that effect but those are tricks for our students to know.  We can't give away all of our secrets for free!

Look!  It's another Bicycle Wheel! Cindy is making this one in red, white, and blues and she already has the front side completed so perhaps she'll finish this upon her return.  We'll know for sure next week. 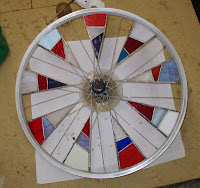 Shawn's Diver had some minor adjustments made to it as recommended by her husband who wanted the diver to be wearing a specific type of suit.  All in all the changes were very simple and involved removing details rather than adding them. This is coming together quickly and I think its going to be spectacular when it's got some light behind it. 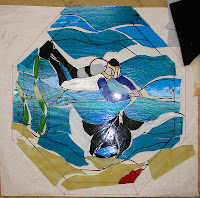 Bee has has got solder on the second side of her Cardinal Window  which means that she can now see light at the end of the tunnel.  We cheated a bit and held it up in the light and let me say that you will be impressed when this gets its closeup with Mr. DeMille. As beautiful as this window is I think that Bee is ready to move along to something else and trust me when I say that will be very, very soon. 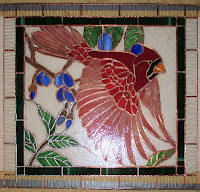 MiMi is about to finish her next Hexagon Window.  Can you spot the break?  Neither can we! So much textured glass, so little time! 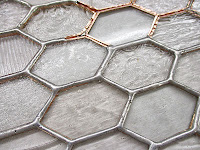 This is moving quickly!   Mary said she wasn't able to work on her Red Fish during the week but the amount of grinding that she accomplished while in class was astounding.  You can really see the fish now that things are fitting into place but there's still one thing missing and that's the dot near this fish's tail.   Have no fear though as we'll add that once everything else has been ground. 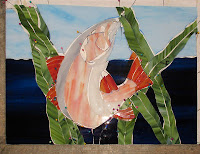 And Betty has more Humming Birds under way!  I love her color combinations, especially the second one from the left but that's not to say that the others don't look great as well. 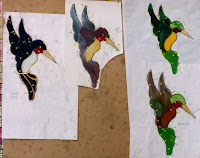 Although Lisa wasn't able to make it to class she sent a picture of what she's been working on during the week.  It looks as though she'll have that last panel for her latest Lantern completed when we see her again as well as a Cardinal Suncatcher. 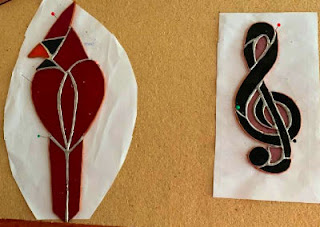 And Susan D also couldn't make it in and also send a current picture of the work she'd accomplished over the past week on her Summer Panel.  With just the letters in the word Summer left for her to cut out I do believe that this is going to be completed before you know it! 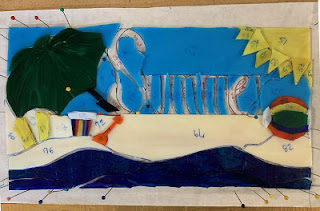