Blood May Be Spilled

Judy is back in action and she wasted no time completing the soldering on her Teddy Bear Window.  It took her most of the night to finish soldering but that's only because she took her time to ensure that she did a good job.  In the end her lead lines looked great.  You can't rush perfection and this Bear proves it. 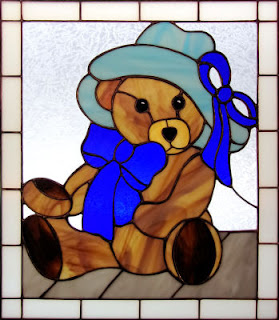 Jan came in with a plan in mind and was able finish off her first wedding box.  In one class you say?  Well, she went with a single border which really helped but the fact that she used only a single border doesn't make this box any less beautiful.  A single border box is made with just 12 pieces of glass and that's why we can get these done so quickly while maintaining an air of elegance . 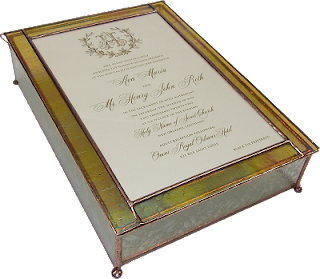 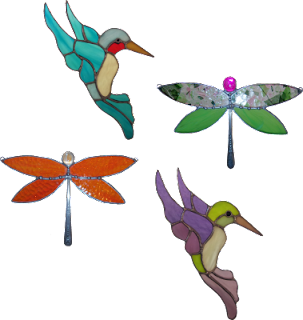 Here's the whole lot of them: 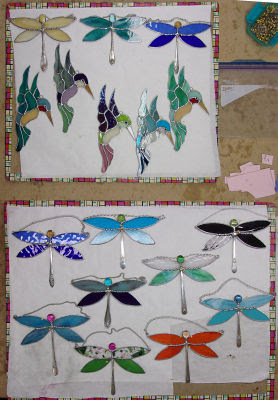 Ann started two large (and complex) Suncatchers this week.  Her Wrought Iron Cross has been cut from a yellow/black glass which may sound like an odd combination but just look at it!  She's also begun a Winged Heart and is making the heart out of an iridised white glass.   This one will end up requiring a lot of grinding due to the complex curves but I know that Ann is well up to the task at hand. 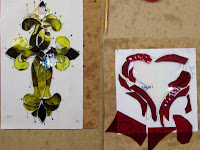 Last week I said that Annette was going to be the first to make something and this week she began cutting the glass for this surprise project.  To start it all off she'll make four small butterflies which she'll assemble in a 3D fashion.  When they are all completed she will string them together onto a three tiered mobile.  I've assembled one before and just hope I can recall how to balance it all out again!!!

I don't know why my camera sometimes takes blurry pictures but as you can see it certainly does from time to time, this being one of those times.  That said you can still see the basic Geometrical Suncatcher that Susan R is currently working on.  Once it's finished it will have a crystal hanging from the center.  Perhaps with a single hook it will even spin if it isn't placed against a window... 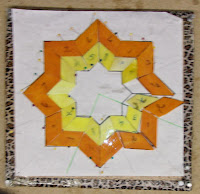 Martha's got a Grinch in the works and I have to say that it looks a bit odd with only a few pieces of glass cut out.  It almost looks like he's winking at us! 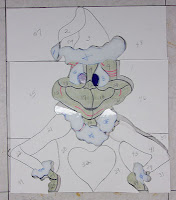 Lara's Peony Window is coming together quickly.  I'd say the the hardest parts of this are behind her now.  Lara opted to work by dividing her flowers into individual sections.  She then cut out the pattern pieces for each section one section at a time.  Then she'd cut the glass pieces, grind them, and then move along to a new section.  This prevented her from having to maintain numbers on each piece and from being over run with countless pieces. 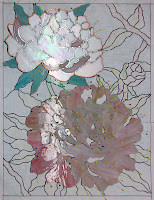 Next up we have Melissa's Heron and Irises Window  which got most of its background cut, ground, and tacked into place.  There are only a few pieces left to go and then Melissa will put a bevel border around it all.  The end is near!

Sheri is working on two Seashell Pendants.  She has the two piece framework done for a pair of these and just needs to foil the jewels, globs, and seashells that will fill the bottom of them.  after that it's just a tack and a solder away from completion. 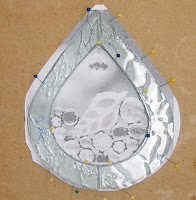 Let's Cat Window is nearly finished as she cut out and ground all of her background pieces while in class.  I'm certain that she'll have this wrapped and tacked when she comes back in which means that the next time you see this it will have a border attached.  I'm also expecting Let to get a lot pf this soldered as well.  Time will tell but I'm pretty confident about this. 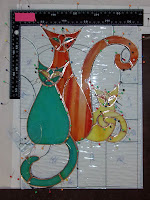 Linda L got all three of her Butterflies ground and wrapped with time left over to tack them all together as well.   It's a safe bet that these will be another of our completed projects next week because soldering these suncatchers is child's play for Linda.

With her pink border now in place June is ready to resume soldering her Nurse's Window. With the front almost completely soldered she'll be working on the back side of this when she returns.  There's even a good chance that she'll be able to finish this and that you will be looking at it in it's completed form when you see it in our next post. 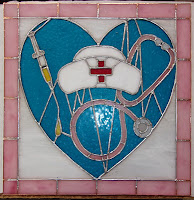 It's looking like next week will be a busy week for completed projects because we saw Kerry pick out a green cathedral glass for his Magnolia border, cut it, grind it, tack it together solder the front side and then flip it over and solder 85% of the back side as well.  Yep, betting on this being completed when he returns is as good as money in the bank. 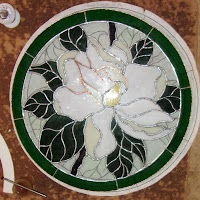 Here's yet another background that was ground and then wrapped and tacked together.  Mary Grace has her Peacock Window ready for its first, thin inner border which she will cut out of a teal/blue.  Actually, the strips have already been cut so all that's left to do now is to break them down into their individual pieces and then work on the three curved pieces for the top. After that it's just got one more clear border to go before Mary Grace can begin soldering.

Shawn's Hands With Flowers Window is well on its way now.   The front side is halfway soldered but this is a BIG window and it will take a while to wash and clean so there's no way that it will be completed next week.  These large windows always take more time to finish than you initially think but it's always a joyous occasion when they are completed.

Cheryl's Tree of life just needs a little ground work now and then she'll be set to 'borderize' it!  This window has given Cheryl some trouble but only because she had cut her pattern out entirely and had things mis-numbered as compared to the numbers that were put on the pattern by the last student who made this.  Engineering your project from start to finish by taking small simple steps makes a project like this much easier.  Luckily, Cheryl was able to recover gracefully. 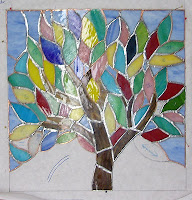 And these are the Wood Ducks that Cindy is about to begin cutting.  Once again, Cindy is dealing with a window that contains a lot of small pieces but we all know how much she loves that!  I can't wait to see this when she comes back in with it. 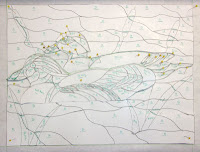 And there you have it.  One blog, one day early!
Paul
Bayou Salé GlassWorks