Shawn's Ethnic Hands Window is monster big!  It's far bigger than you would imagine measuring in at a whopping 22 inches wide by 32 inches tall.  Her glass choices are perfect (you've got to love that fractures and streamers inner border) and the flowers are divine.  Another job well done by Shawn. 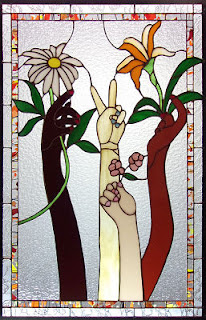 June's Nursing Window has been officially completed and she was very happy about how it turned out.  The colors work wonderfully allowing the needle, the nurses cap, and the stethoscope to be easily seen in front of that vibrant blue background.  I've got to say that June's biggest strengths are her grinding and her soldering which she's pretty much got down pat. 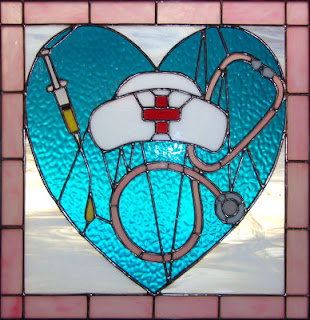 Let's Trio of Cats Window is purfection!  She worried a bit that the purple border was too dark but it only appeared to look dark because it was on the table without any light behind it.  Once this was hanging up the purple glass that she chose wasn't dark at all. Windows always look their best when there's a little light behind them. 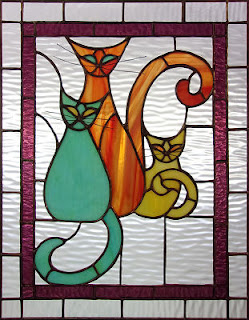 Susan D assembled a beautiful Honeycomb Suncatcher along with a curved Bee to go with it. It's hard to see the curve of the bee so I'm providing a side view of it as well. 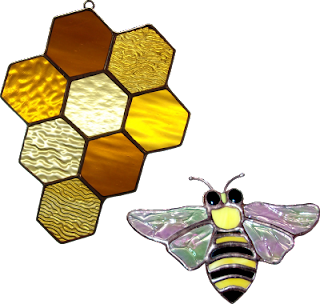 Here's what the Bee looks like when it's resting on the table.  The wings are also curved and the end result gives it a VERY unique effect. 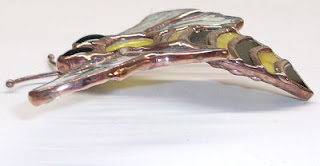 Lisa's large Split Leaf Philodendron Suncatcher shows that she has a natural eye for color.  I've seen these done so many times in two different greens but to mix the greens up the artist uses the alternating color method which makes the leaf look like a ladder.  Lisa understands that it's fine, even necessary, to have two touching sections share the same color.   It gives it a thoroughly natural random look. 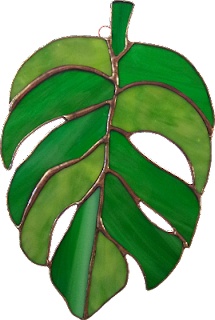 Linda finished her three Butterfly Suncatchers and they look very similar indeed.  I don't believe that anyone will be fighting for one particular Butterfly since they all look equally stunning. 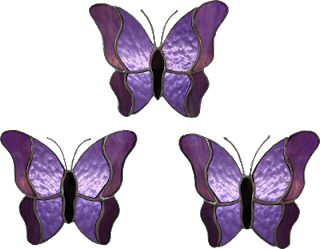 Sheri's last Teardrop Seascape was made in ambers while her newest Seascape has been made in colder silvers and blues (and greens).  They say the sea is cold  and Sheri's newest silver beauty reflects that perfectly. 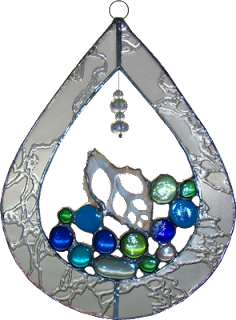 Kerry is WELL under way with his version of the classic Umbrella Lady.  The purples and pink work wonderfully together and now that Kerry has this woman all cut out and ground he will tack her together and then get the background cut.  I'm expected to see rain hitting that umbrella next week!

Barbara is working on an eight sided panel lamp and now that everything has been ground and wrapped in foil she's begun assembling each panel by completely soldering them.  As you can see, she's got four panels finished.   Why don't we tack them all together and then solder them?  Because it's far easier to solder the panels while they are laying flat on the table than it is to try to balance them in your lap and keep them level while soldering them. 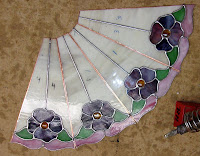 With almost half of her Grinch Window already ground I'd say that it's safe to say that Martha has complete control over the situation.  She may take a break from this next week though because she's discovered that she needs to complete a wedding box as quick as possible. 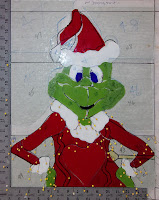 It must be Christmas in August because not only do we have a Grinch in the works, we also have Linda L working on three Santa Faces as well.   She's got the red and the flesh all cut out as well as the white trim on Santa's hat as well.   Next week the white glass for Santa's hair will be in and Linda will be able to finish cutting these out.

Steve's Wine Glass Yard Decoration has its bubbles all tacked into position.   The hardest part of this project is getting the soldering iron to heat up hot enough to make the solder connections smooth.   The problem is that although copper is an excellent metal to solder to, it also conducts heat effortlessly.   That means that the heat of the soldering iron spreads quickly through the copper rod that makes the outline of the wine glass, which in turn means that it just takes a lot of patience to get things nice and smooth on this (and when I say a lot, I mean a LOT!)

Cindy is making huge strides in her Duo of Ducks window! The only thing left to go is cutting out the rest of the glass for the water. I don't see this window lasting too much longer for Cindy-- she's a glass making machine! 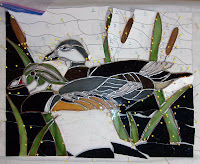 MiMi was back in class and finished grinding and washing the remaining pieces of the repair window that she's rebuilding. It's been a learning process all around for MiMi as she discovers just how badly crafted this window was. First, nothing was ground, second, nothing fits together very well even after we reduced the overall size of the window by a quarter of an inch! It's hard to believe that the gaps she is trying to work around were even bigger before we reduced the pattern size. But she's wrapping pieces now and soon she'll be ready to solder this back together and actually have it looking even better than it was before the glass was broken. 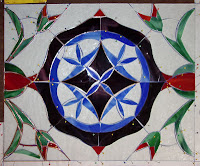 Cheryl came in, got her final border tacked into in position, and then began soldering.   She took her time, she didn't rush, and everything is smooth.  There's a little touching up to do here and there on the front side but not much.   Slow and steady has Cheryl winning this race with her Tree of Life! 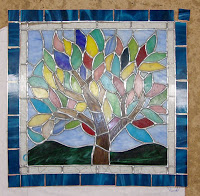 Melissa's got all her pieces filled in and her first beveled border attached.   The next (final) border will go on quicker than Ashlee Simpson killed her music career!  Expect to see solder on this when you see it again and when it's done Melissa may even do a little jig for us!

Annette has her remaining three Butterflies cut and ground.  She's taken them home so she can come in with them foiled and ready to be assembled.   I think we can easily accomplish that next week.   I can't wait to see these all floating around each other when they hang in their mobile state! 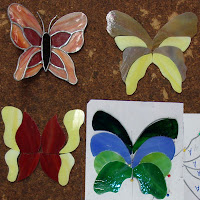 Judy finished cutting all of her glass for her Winnie The Pooh Window and even had time to move on over to the grinder.   By the night's end she was able to grind everything from Pooh's ears on downward.  Not bad at all!  I have no doubt that she'll finish grinding this when she returns. 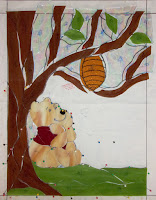 Sheri's next Teardrop Seascape will feature a lighter, slightly pastel color arrangement highlighted by an iridescent textured glass for the teardrop itself.  It sounds like another winner to me! 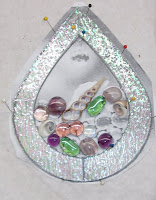 And there you have it-- all the news that's fit to be blogged about!
Paul
Bayou Salé GlassWorks