This is going to take a while to explain because Ann's got a very unique window indeed.   She wanted a multicolored circle with a cross on it, not IN it.   She wanted the cross to be raised on a completely different level from the circle section which was something that I'd certainly never done before but which was something I knew we could work out.   First Ann made the circle and completed it.  Next the four pieces of the cross were cut out.   The only way that I could see to attach the cross was to use one inch posts.   How we would ever get them to line up with the lead lines on the circular piece was still a mystery to me because they needed to attach to lead on both the cross side as well as the window side.   The solution to this conundrum involved having Ann covering covering the four cross pieces in foil and then covering all of the cross in lead.  She textured the front of the cross using a semi warm iron and then added a glass bead in the center to give the cross some much needed strength.   With the back of the cross completely soldered Ann was able to mount the four posts onto the window and then tediously get the cross attached to the posts with small dots of lead.  Once the cross was attached to two posts we were able to turn the entire piece upside down and get the cross attached much more firmly.   What you see below is the end result.   I've also included a side shot so you can see just how much higher the cross is from the rest of the window,  The end result has a cross that appears to move in parallax over the window depending on the position that you view it from.  In hindsight, I should have taken a video.  :-( 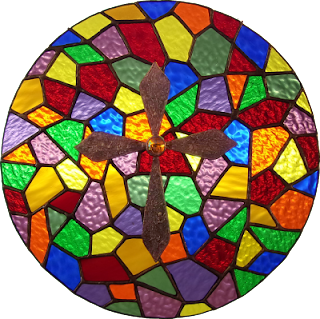 Here's the side view of Ann's window.   You can clearly see the 4 posts that hold the cross out and away from the window itself.

Mary's Cardinal and Sunflower Window is the first of two of these patterns that have been completed this week.  Mary went with a rich blue color scheme and her window is definitely striking.   I love how her green leaves have a yellowish tint to them ensuring that the bright red cardinal is the focal point of the window.  Her soldering is perfection as are all of the other skills that Mary used to create this window. 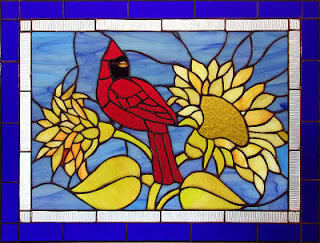 Let has made a Cardinal Window of her own but this one features a male and a female Cardinal.  She took her time lining up the lead lines that cut across pieces of glass to form thin branches and everything lines up perfectly.  That's the toughest part of making this window and Let handled it as though she's been making stained glass for years! 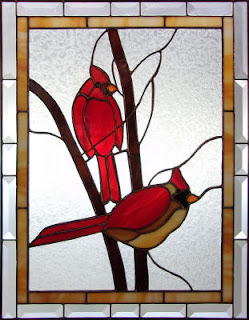 Cindy's Bowls are a huge topic of conversation throughout all of our classes.  The thing that scares everyone else from making their own bowls is the fact that  Cindy didn't use a pattern to make them.  She just assembled them piece by piece using randomly drawn shapes.   And you know what that means-- each one of these bowls are unique because no two can ever end up being the same. 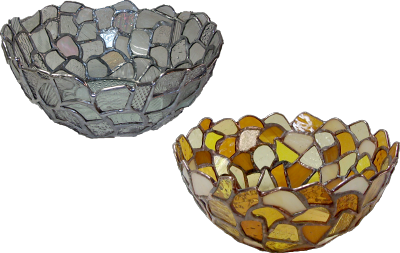 Martha's version of the Cardinal and Sunflower design is striking in its own right.  Her color scheme is all about soft muted colors which include her earthy green border and her baby blue sky.  Colors can change the look of a window but they never hide the beauty of the design especially when the workmanship is this good. 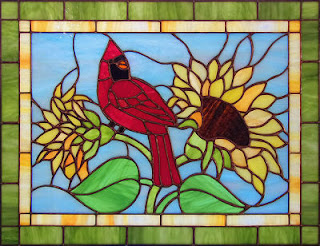 Cindy also made two of these geometric Spiraling Circles which are certainly fun to admire.   Her color scheme accentuates the coiling effect effect that makes this geometric design so three dimensional.  Last but not least she completed a small pendant that she made around a small 'diamond' studded piece of jewelry.  That's what I call thinking outside the box. 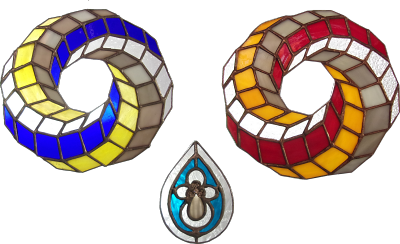 Lisa has finished her Decorative Feather Mobile which finds the feathers hanging from a bicycle pedal Gear whose openings she has filled in with different colored glasses.  The end result is a winner for sure and she's made this 100 percent on her own with no input from me at all.  Stunning!

Susan R has finished her beautiful Pinwheel Suncatcher and finished it off with a bevel in the center to prevent what would essentially become a big uneven blob of lead from forming in the center.  Whenever you have more than four lines joining together the solder tends to pool in the intersection creating a mess.   Susan's use of a bevel has nipped that problem in the bud. 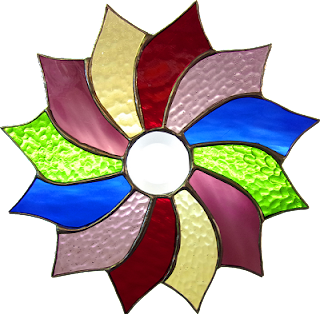 Susan D competed a Silverware Dragonfly but opted to not cut off the utensil end of the silverware.  Since she was using a small spoon she thought that the 'bowl' of the spoon would resemble the dragonfly's body.   When it was finished we discovered that she put a completely new twist on what's becoming an old favorite.   She also finished her 6th and 7th (or so) Birds on a branch leaving her with (I think) only one (or possibly two or three or four) more to go before she wraps up her Birds on a Branch Series.  Note how she added paint to the lower bird to give it a more realistic look. 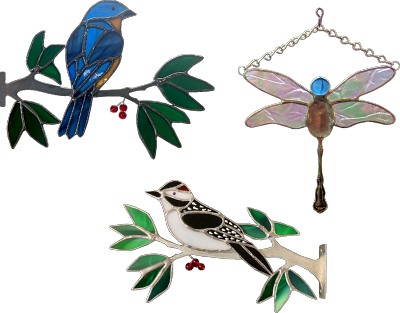 Let's latest Owl is a study in soft greens and as we already know, these Owls look good with just about any color combination that you could possibly throw on them. 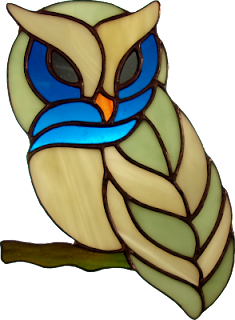 Cheryl's Tree Of Life is certainly coming to life now.   She's organized and she's determined to see this window completed.   There's really just the green grass and some small pieces of sky left to go before she picks out a color for her border (or borders). 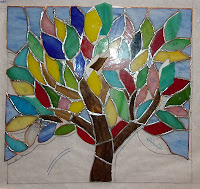 Melissa Tacked together all of the the subject matter of her Heron Window and then placed it on top of her background glass to trace out the remaining pieces.   She's got the biggest pieces cut out now and will grind and them into place before she cuts out any more of her background glass.   This will ensure both stability of the window while she works on it, and squareness.  I suspect that we'll see the remaining pieces of background cut when she comes back in next week.

June got her background glass attached and then decided to go with a pink border to finish it all off.  Alas, she had accidentally left her pink glass at home. Rather than just sitting around and wasting a class she set upon soldering her front side to keep the work flowing on this project.  No time was wasted here! 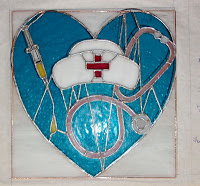 MiMi is making INCREDIBLE headway on her window repair.  This week she removed the lead and foil from the remaining 28 pieces of glass and then set upon grinding everything.   We've printed out a copy of the original window and reduced its size by almost 1/4 of an inch  so we could close in some of the gaps that we knew existed.  We were surprised to find that the original pieces had never been been ground which explains why the fitting of the original window was so bad.   There are sections that fit together in an acceptable fashion but there are other sections that still have some large gaps and make we wish that we'd printed the pattern out even smaller.   Alas, it's MUCH better than what it started off as and we don't want to change things up too much since the owner loved it as it was.  MiMi is going to be away for the next two weeks but when she returns she'll finish up her grinding and then begin wrapping everything. 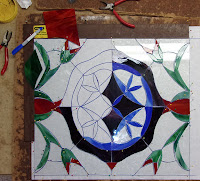 Linda L has got three Butterflies in the oven so to speak.  Lately it seems that Linda is working in groups of three and that's because she's always making things for herself and her two daughters.  (And  sometimes other faily members as well!)  The picture is dark but each of these will light

Susan D has two Tulip Angel Ornaments cut ground and ready to wrap.   She also  got a second Silverware Dragonfly all cut and ready to grind as well.   She's a stained glass machine!

As you can see, Betty is certainly keeping busy as she now has five Humming Bird Suncatchers and eleven Silverware Dragonflies all tacked together and waiting to be soldered.   She likes to keep a surplus of gifts on hand and I believe that this will constitute a 'stock pile'!

And to finish things up here I'll talk about Annette who was in this week but who had no clue of what she wanted to begin making.  All she knew was that she wanted to make something different and by the end of class she decided to make something that we've never seen before but that I've played with once a few years back.   Just wait until you see what it is.  Oh, and thanks for all of that Chinese food, Annette!
Paul
Bayou Salé GlassWorks
Posted by Bayou Salé GlassWorks at 4:09 PM