Some Finesse Will Be Required

Mary's Winged Heart is gorgeous.   This piece is all about the deep curves which you normally don't see in stained glass.  If you go out of your way and add extra time and effort to a piece it always pays off and this Heart proves it.  Instead of merely surrounding the heart these wings gently embrace it.  Mary has outdone herself with this one. 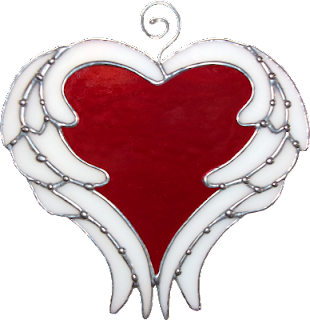 Here's the first of three Santa Faces that Linda L has completed for three Lanterns that she will replace the clear glass panels with.   Each side of the Lantern will feature a different Christmas scene so expect to see some Christmas Trees, some Reindeer, and a few snowmen as well in the weeks to come. 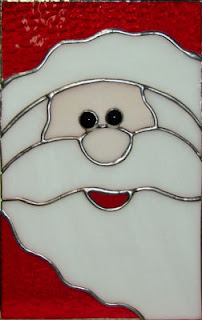 Lisa's got two Flower Angels finished and we'll be seeing even more of these when she returns next week.  She's on a roll and has made one of these as Flowerpot Ornament (hence the stake).  Things are looking good for her as she prepares for a show coming up in Centerville and I believe she'll do quite well there. 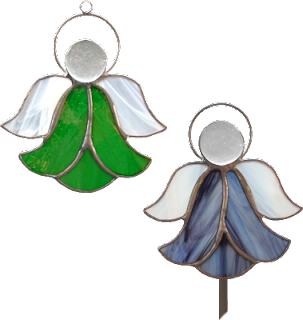 This is the last of Susan D's Birch on a Branch series because she's officially made the entire set.   Her pieces got more and more detailed as she honed her painting skills on each successive bird.  I remember when a single drop of glass paint was a great eye, but now she provides eyes with pupils and multicolored spots on some of the birds feathers. 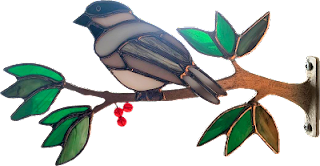 And here's Susan's window with all of her birds in it.  This looks even better than the advertisement I always see for the Bird Branch kits that you find in stained glass catalogs! 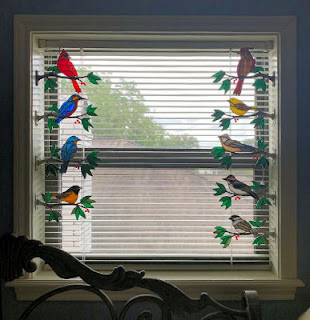 These Dragonflies are ever so popular when they are completed.  This was actually made (and sold) at the last show we did in Alexandria, LA.   I made three of them in three different color schemes and came back home without a single one.  They sell that quickly. 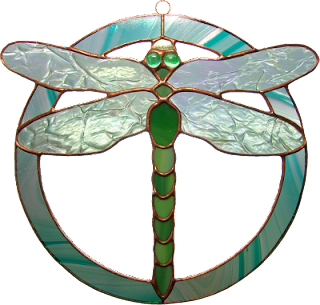 I also made this window for a local customer to match the stained glass that she has in her front door.   This is being installed above the door at the rear of the house and although it isn't a perfect match (space prohibited that) the glass textures are the same and the basic pattern has been carried through.  I'd have no problem installing this above the original door that its pattern was derived from.

Let cut this entire Bathtub Lady Window out in just one class!   Rather than staring at pieces and wondering how long it will take to cut them, Let set her mind on getting the job done.  Although there are no bubbles in this window yet, Let will add them after everything has been ground.  Hopefully we'll be able to find either some iridescent glass for bubbles or some small clear glass globs. 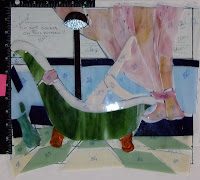 Next we look at the Wedding Invitation that Martha began. She got all of the tiny leaves cut from three different yet similar shades of green glass and then got everything ground as well. Once this has been wrapped and tacked together she'll cut out the background glass and then finish the box lid for a beautiful wedding gift. 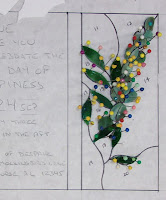 Shawn's new window goes out to the Krewe of Hera.  This Hera Flag Window will be made in three sections and then tacked together to form one window.  With her Greek style lettering already cut out the center third of this window is well under way. 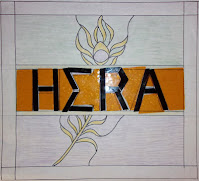 Steve has got another Wine Glass in the works but this one is considerably smaller than his first. It still looks just as good and Steve made sure that this was PERFECTLY symmetrical unlike so many other wine glass projects that I see when I'm online looking at stained glass.  The man has an eye for detail. 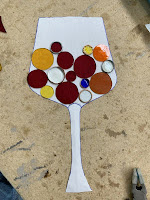 Ann finished grinding her version of the Winged Heart as well as a Wrought Iron Cross while she was in.   Once her work at the grinder was completed she began foiling her pieces. I'm thinking that there will be some soldering going down on these when Ann returns.

Here are the remainder of Lisa's Flower Angel Suncatchers.  as you can see she only has one more to wrap and then the remaining four can be soldered and packed away until it's showtime!

Featuring THE most perfect border you could ever imagine for a window, Kerry's Umbrella Lady will surely be the talk of our classes.   Just wait until this gets lit up because then the heads will REALLY turn!  This is all about good planning.  Kerry saw the purple and pink glass that he wanted to use as a border and then used those individual colors for the umbrella and the dress so that everything would tie together perfectly.

Annette finished all four of her butterflies which means that she's about ready to get these strung up to create one large Butterfly Mobile.  It's all about weight and balance and I have a feeling that it's going to be very interesting.  Hopefully the metal rods will be here next week so you can see just what this is all about! 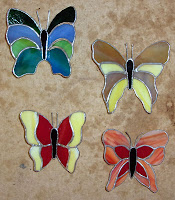 With only five more pieces of water left to cut in her Wood Ducks Window, Cindy will be wrapping this up shortly.   Now that the water is in place (essentially) someone in class noticed that there's not just one duck in the window-- there's two!  They sort of got lost on the white paper but now that there's glass surrounding them the differences in contrast make the pair hard to miss. 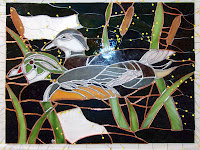 Jan has begun her second Plate Window and has the four background pieces cut out and halfway wrapped.   With just a border left to go for this window Jan is going to be finishing it lickity split. 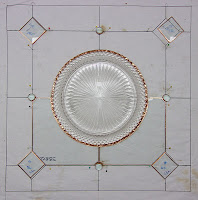 Lara was busy foiling all of the petals for the largest flower in her Peony Window.  Things are coming together nicely and it won't be long now.  I'd say that slow and steady wins the race but there's honestly been nothing slow about Lara's progress on this detailed window. 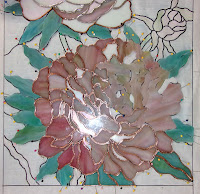 Next up we have yet another window with a perfect border.   Melissa chose a glass that is very similar to the glass she used in her Heron's feathers.  There is a definite difference but that difference lies in hues alone because both pieces of glass feature a mix of both purple and blue.  They're close but they aren't THAT close-- you wouldn't be able to replace one with the other and that makes this the perfect accent color for a border.   Melissa has taken this home to solder and with a little luck we'll see this hanging next week. 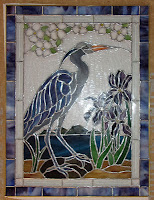 As you know, Linda L has one Santa Face completed and these are the other two that are on the way.   She's wrapping them as you read this so I doubt it will be long before both of these are completed and featured at the top of our next blog post.