It's On The Tip Of My TONGUE

Kerry's Circular Magnolia Window has been completed and I just know that Jeanne is going to love it.   He made this for his wife and his work has consistently been getting better and better.  They say a picture speaks a thousand words and this proves it. 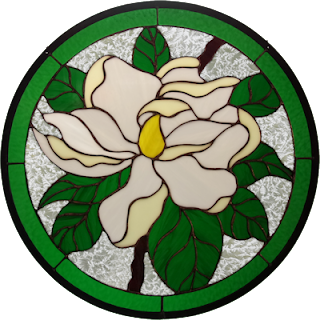 The first of Sheri's Teardrop Seascape Suncatchers has been completed and I have to say that it looks marvelous.   She's got one more cut out and I believe that she said that she was going to make a few more so expect to see more of these throughout the weeks. 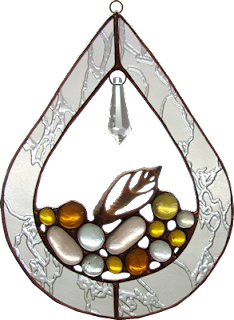 Here's a look at my Angel Wing Heart.  The design came from a piece of Jewelry that Facebook has been trying to sell to me for the past few months.  Inspiration can come from so many different places, all you need to do is keep your eyes opened. I knew that the points of the wings cutting into the heart would make this difficult but I also knew that those deep cut were the thing that was going to make this look so unique.  Then I went and added solder dots along the lead lines as the icing on the cake. 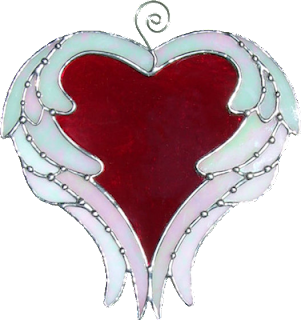 Here's a look at the necklace that the Angel Wing Heart pattern was derived from. 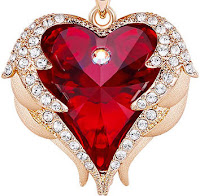 Judy has begun working on a Winnie The Pooh Window and what a productive night she had!  First she traced out the pattern and then cut apart the poster board pattern pieces.   Next she cut out the glass that makes up the leaves, the bee hive, the ground, the bear, and Pooh's shirt!  That leaves only the sky and the tree left to cut before she can begin grinding this incredibly cute window 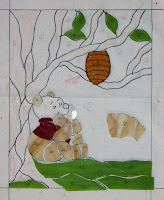 Kerry's next project is the ever popular Umbrella Lady.   He's got his pattern pieces all ready to trace and his glass all picked out so we'll see some real movement on this project soon. 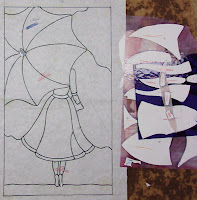 Betty set herself to work as soon as she walked into the door and began grinding her Blue and Clear Geometric window.  Once that was accomplished she decided to spend the rest of her class cutting glass rather than foiling, which she can easily do at home without making nearly as much of a mess.   By the time class was over with she had cut out a pair of Cardinal Suncatchers and even got one of them ground as well! 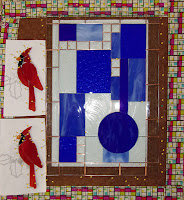 Lisa cut and ground a Split Leaf Philodendron Suncatcher which are so popular these days.   Her work is flawless even though she was working through a considerable bit of pain.  We hope she feels better and I do believe that her Leaf will be completed when we next see Lisa. 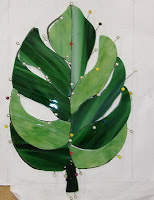 Annette's Butterfly Mobile will consist of four Butterflies and she's got them all cut out now.  She's already got one of them ground and another completely finished!  Yep, these Butterflies will be flying before you know it. 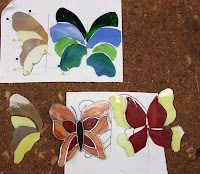 Ann's got two Suncatchers under construction.   Her Angel Wing Heart was completely ground this week and she's about halfway through with her Wrought Iron Cross Suncatcher as well.   It certainly  looks as though Ann will be foiling glass when she comes back in.

Lara has all of her flowers cut and ground for her Peony Window.  She's working on the leaves now and from there she'll move on over to the background and the flower bud which surely won't take her long at all.  For a window with a lot of pieces, this is coming together quickly.

Mary worked on her own Heart and Angel Wings Suncatcher getting it all cut out and completely ground as well.  She's taken it along home with her to foil during the week so this should be ready for soldering when we see it next.  In fact, it should be a completed project as well! 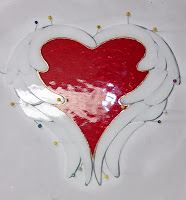 Martha's Grinch Window is now fully formed!  Last week his face was barely started and he only had one eye but this week Martha went on a glass cutting spree and got him all cut out.  It looks like she and the Grinch will be moving on over to the grinder when we see them next. 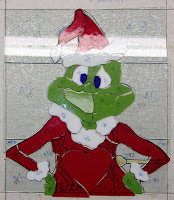 Steve's Wire Frame Wine Glass is as unique as can be and has been a learning experience for everyone as he moves along on it.  As you can see it's essentially finished but Steve is trying to tin the thick copper rod with lead to give the entire piece a uniform look.   The blowtorch didn't work as planned but that isn't going to stop Steve.  More details will follow as Steve moves further and further along on this.

Melissa was busy filling the empty background pieces of her Heron Window and nearly got all of them cut and ground.   With only a very small handful of pieces left to go on this I suspect that the beveled border that goes on next will be attached  upon her return.

Cindy's Wood Duck Window was tackled in the best most possible way:  by doing the hardest parts first.  With the pair of ducks all cut out (and ground) Cindy got all of her tiny pieces out of the way.  All that's left to do is for her to cut out the large pieces of glass that make up the water. 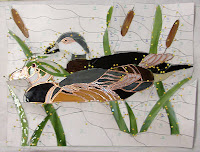 Mary Grace has the first of her two borders attached for her second Peacock Window and now it's really taking shape.  There's just one more border to go and two fill in pieces that will turn this from a rounded top to a squared top which will make it look much more aesthetically pleasing as well as practical, sturdier, and considerably easier to hang.

Susan D has a busy bee also.  She's got two more Silverware Dragonflies cut and ground, two  more Birds on a Branch, and a 3D Bee Suncatcher involving a bee and a honeycomb.  She takes no prisoners as she knocks out stained glass pieces as quickly and efficiently as ever.

Let worked on her Cat Window by tacking it all together and then getting her double borders cut and attached as well.  That was when we noticed that one of the cats had a crack running through a piece of glass in his ear.  Even though Let didn't have the replacement glass with her I knocked out the broken piece so she could learn how to do a repair.   She'll fill in the missing piece when she gets home and then we'll see these cats get their wire whiskers before getting washed and cleaned up to become a finished window when we next see this again. 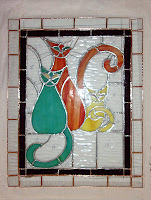 Cheryl's Tree Of Life is a living window now.   Everything has been filled in and tacked into place, even the first clear inner border.    The final wider, blue border was also cut and ground before Cheryl called it a night. She's taken all of this home with her to foil and possibly even attach.   It's safe to say that the end is near. 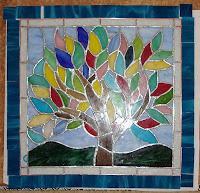 Susan R finished grinding her Geometric Suncatcher which has been reinforced with re-stripping to ensure that none of those straight lines that create all of those 'hinge points' fold in half on her.   I can't wait to see this hanging up with the jewel that she picked out hanging in the center of it. 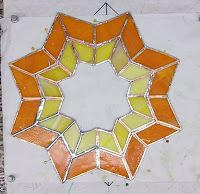 Look out because Shawn has completed the soldering on her Ethnic Hands Window!  That means that when she returns she'll be able to wash and color this massive project.   I guess it's time for Shawn to decide what she wants to do next.

Lastly, here's a look at Sheri's next Teardrop Seascape that's wrapped and ready to be soldered.  As you can see, this one is in a completely different color scheme.

And that about wraps things up here.  We'll be back in a few days with another tip of the week though, so keep your eyes peeled for that notification in your inbox.
Paul
Bayou Salé GlassWorks