Wow. The large windows are always impressive and this certainly fits the bill. Jane's Fireplace screen looks GREAT! It's based loosely on a pattern she saw on the cover of a book but it's been altered so much that the only thing it has in common with the picture she saw is the fact that they both have mountains and trees. We're not quite sure what Jane will be working on next but she has a number of ideas for things she wants to do. 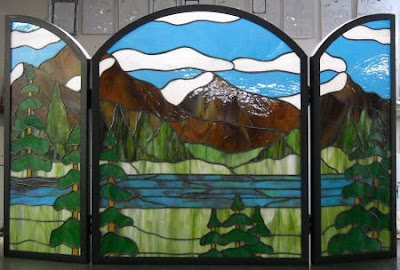 And Fran's Wedding Box ( though smaller than Jane's Screen) is equally impressive. Rather than making the rose smaller so it fits inside it's background, Fran opted to make the rose extend into the border. It's a bit more work when making the border and trying to keep everything square but it's really worth it in the end. 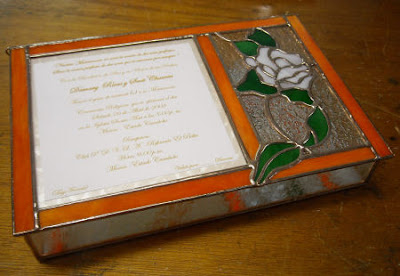 Janice has her first centerpiece wrapped now and also has her second one fitted together nicely. She'll be wrapping this at home so we'll see background being cut for these 2 windows very soon now. 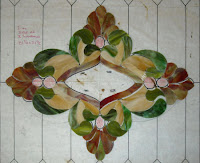 Grace has all of her window ground now! There are 2 borders to add to this but we won't worry about them until this is all tacked together. That insures a perfectly straight border. I can't wait to see this one hanging up. It's huge! 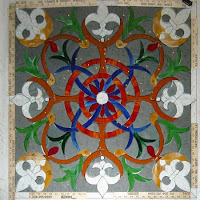 Cheryl has another Wedding Box in the works and I suspect that it will be completed next week (I know this because I'm a week behind here and know it was finished 3 nights ago. lol) The invitation is black and white and Cheryl is using 2 different clear glasses along with a great black Baroque glass for the border.

I was only going to do 2 posts tonight but I'm on a roll now and there's only one left to go to be completely caught up with the Blog so I might as well finish it now.