It's Quiet Without Cheryl Around....

Grace has completed the Angel window that she's been working on for the past few weeks. Although Cheryl made hers with a purple border, Grace preferred to surround this one in dark blue. Either way it looks great although the blue didn't really light up with the wimpy fluorescent bulb that was behind it. If you like this just wait until you see what Grace begins working on next week... Lea is down to just 3 more inserts before she moves on to a new (and more colorful) project. These are the last of the small windows she's doing so she'll be working with bevels again next week. Lea has a new cutter and from what I heard she really likes it. I hadn't noticed that she's been using the same old standard cutter that she's had for the past 6 months or I would have recommended an oil fed cutter long ago. :-) 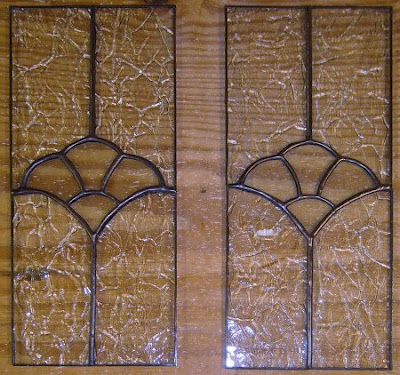 Denise hasn't forgotten how to cut glass-- she's completed this window as a baby shower gift. Not knowing if the baby will be a boy or a girl, she has managed to work a pink hat and a blue blanket into the window which makes this gift perfect for either a girl or a boy. I'm sure this will be a big hit. 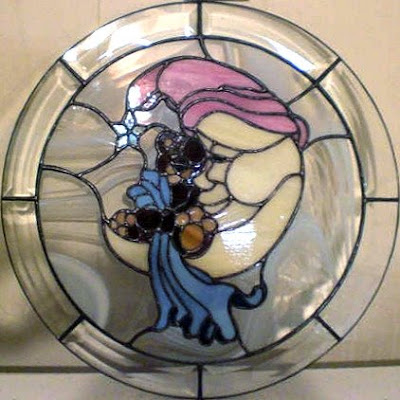 Paul cut out his orange leaves and then got everything all tacked together for the candle holder that he's been working on. He's only got 17 pieces to go and then he'll join these all together to form a rectangle that a candle can be placed in. He moved really quickly this week so I'd have to say that he's more comfortable about the process now.

And lastly, Janice has only soldering left to do on her window now that all her glass is cut. This is the first of 2 of these that she's making. I suspect she'll be working on the background of her second window next week. 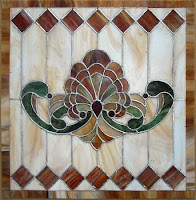 What's In A Blog Title?

In this case-- absolutely nothing. I was pretty busy this week and couldn't keep up with the conversations that usually inspire the title for the weekly Blog. But I did manage to take pictures.

Lea finished another cabinet door insert. By now you must know what the general design will look like. This one matches the one from the week before.

Lea also cut out 2 flemish versions of her bevel cluster for the smaller doors that she'll be working on next week.

Tommy has been busy at home working on an OU window that he designed from their emblem. It's looking good to me. 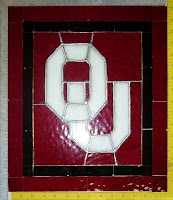 Janice is moving along at high speed now. She's got all the diamond pieces cut, ground, and wrapped. The background glass is, for the most part, cut ground and tacked together on her first window. The cutting went very well and we were able to cut it all from one sheet of glass. I suspect she'll have this one ready for solder very soon now. 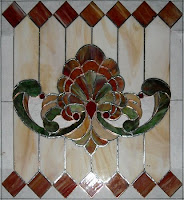 Grace has her Angel window all together and even has the round Zinc channel on it. She began soldering it and has the front side completed. There's no doubt that we'll see this completed next week because this angel has its wings! 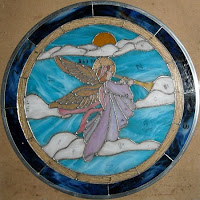 Cheryl has her peacock tacked together and all that's left now are the borders. She couldn't cut the thin inner border because it needs to line up with parts of the outer border. That means she had to cut out the beveled diamond sections and tack them together first. You can see these sections on the left and right of the peacock in the picture. Cheryl has taken he window home so she can solder the front side.

Paul began working on a candle holder. It will be a 4 panel leaf design with the leaves cut in two different colors: green and orange. He has the two green leaves cut out and wrapped and took one home to wrap. His cutting is great and his confidence is high so I suspect we'll be seeing great things from him. 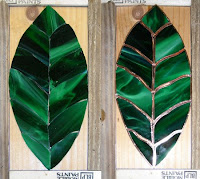 And that's all there is this week. We'll see some orange leaves and borders next week as well as some cabinet doors from Lea.

We had a new student this week and regular readers of the blog know what that means: a picture of a butterfly suncatcher will start off the blog. :-) Paul did his in yellow and blue (which you can easily see for yourself. He had no problem making this at all and I'll bet we see some nice work from him as the weeks go by. 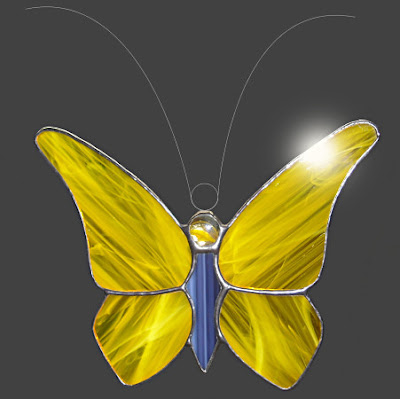 We not only heard from Gerald this week, we saw him as well. He came in for some channel to finish off this window that he made at home. Gerald wants to return to classes and there's a chance we'll be seeing him again in 2 weeks. We won't hold it against him if he can't make it but we'll certainly miss him if he can't make it in. Here's his latest project. 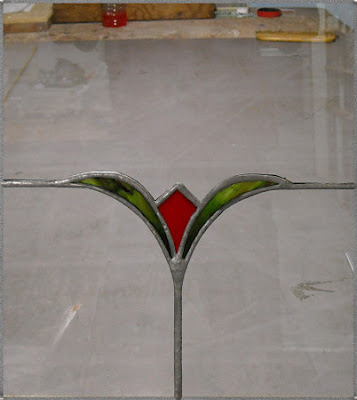 Grace finished the center part of her Angel window and then cut the two borders for it as well. The clear, inner border is already wrapped and tacked on but she ended up taking the final border home to wrap. After that's attached she'll add the final zinc channel and start soldering. 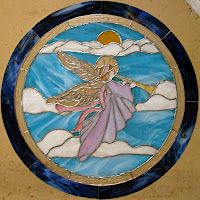 Janice got the two inserts of her next 2 windows all cut, ground and wrapped. This one needs to be tacked together before we can cut the background glass for it.

This centerpiece is already tacked together so it's all set for background glass. We'll see a lot of progress next week when the background is all cut around this. :-)

Cheryl has her background cut. Since it's clear glass you really can't see it against the pattern. It will be tacked into place during her next class and we'll see her inner border get cut and ground as well. Cheryl is almost finished with this window-- the tough part is over with!

Come back next week and see what else is up in the shop!

Texting the Night Away

We all got a lot accomplished this week and even have the pictures to prove it. Here's a look at Lea's completed insert on the left and the second one which still needs to be soldered on the right. 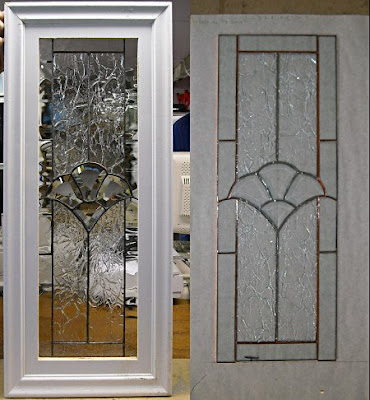 Grace now has her angel window wrapped and tacked together. I suspect she'll have the borders all cut and assembled next week. 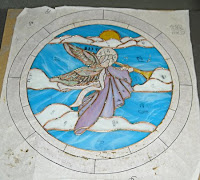 Janice cut the 'arms' to both her windows and took one centerpiece home to wrap. When she finishes one of these I'll do a quick picture to simulate how all 5 windows will look when they're installed.

Christine began working on a second Jesus window. She didn't bring all the pieces with her to grind and ended up regretting that decision when she finished grinding all her pieces and couldn't continue any further. This picture doesn't allow you to really see the iridized white glass that she has cut and ground on the pattern. 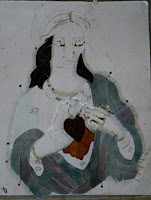 It looks like we'll have the background cut for Cheryl's Peacock window next week. It's all falling in place now...

That it for this week. We should have a new student next week so prepare yourself for another butterfly...

We had our first Weekend Workshop of the year on February 21st and 22nd. Bill joined us during the 2 day class and left with a stained glass Bear window. At first he was worried that he'd bit off a little more than he could chew but in the end everything worked out just fine. In fact, better than fine. Bill turned out to be an excellent student.

Saturday morning he got a crash course in cutting glass which he showed great talent in doing. Next he traced out his pattern and then separated all the paper pieces so he could trace them onto the glass. We started Bill on the green tree sections of his window since the were the easiest to cut. It's best to save the harder pieces for last so he can get some solid cutting experience in before tackling the hard parts. 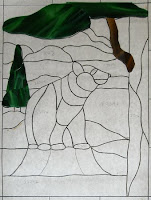 Bill moved onto the blue sky next in an effort to stop from jumping all around on the pattern. With the sky cut out all all he'd need to finish the top section of the window was the clouds and some of the brown tree branches.

Here we see the clouds completed and the water below. We're still jumping around a bit to keep the glass cutting from getting too difficult too quickly.

Now we're really seeing progress! Bill had no problems with any part of the process and the only thing left to do now is the brown parts of the trees. 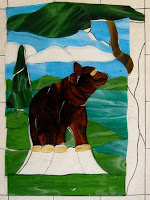 Once all the glass was cut Bill moved over to the grinder to make sure all his pieces fit perfectly. Notice that the borders are missing and that the bear's paws are a light tan color. We never cut borders until the window is ground, wrapped and tacked together so that if it grows any we can make adjustments on the border for exact sizing. Here's Bill's window at the end of the first day, all ground and ready to be wrapped.

Sunday morning was spent wrapping all of the pieces of glass with a copper foil. This is what the melted lead (solder) will actually adhere to . I showed Bill how to do a few pieces and then helped wrap some of his window with him so he wouldn't have to deal with some of the trickier pieces. 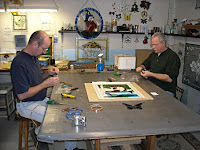 You can see the copper foil here on the bear's face. Every piece of glass needs to be wrapped before we can move on to the next step, which will be the soldering process.

Before Bill tacked the window together he decided that the feet of the bear were too light and he recut them in the same class that was used in the rest of the bear. I agree that the change mad a nicer effect. Once that was finished he cut a border and then began soldering. This step took about 3 hours or so but as you can see he had no problems getting a nice bead along his window. I wish I had some pictures of Bill soldering but I guess I was asleep at the wheel because I don't have a single picture of that step. 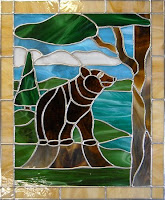 All that's needed now is to color the lead black with a chemical (patina) that is rubbed onto the solder. The process is instantaneous and within 3 or 4 minutes Bill was giving his window a good bath in the sink. We don't want any of the chemical to remain on the window so Bill used a brush and some soap to clean it all off. 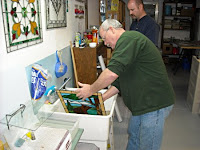 And this is Bill's finished window! All in all it took two 8 hour days to complete but when you consider how much work went into this I'd say he made GREAT time. His window is made up of 77 unique pieces of glass, each of which needed to be ground and then wrapped. 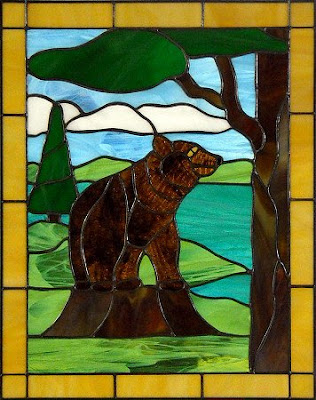 I guess it's safe to say that Bill enjoyed himself while learning how a stained glass window is made because he's going to be coming back for a second class next month with a friend who also wants to make a window. So look for another Weekend Workshop update in a few more weeks. Bill will certainly be a pro after the second one is finished. :-)