I'm going to take this minute to remind all of our students out there that we will not be having classes on Tuesday the 11th or Wednesday the 12th (of November). Classes will resume the following week though.

Well, we have quite a few finished projects this week so let's jump on on and take a look at them.

Lea finished the last of her long, tall cabinet inserts and will be moving back to working with bevels during her next class. She's easily finishing a door a night and possibly even two of them (depending on their complexity) so I don't think the project will take her all that long to finish. Here's her latest.

Fran finished her first Mardi Gras mask and it's a beauty. She designed it herself so you won't be seeing this one anywhere else. The mask was soldered in a curved fashion that doesn't show in the photograph but rest assured this is one of the nicest masks I've seen. 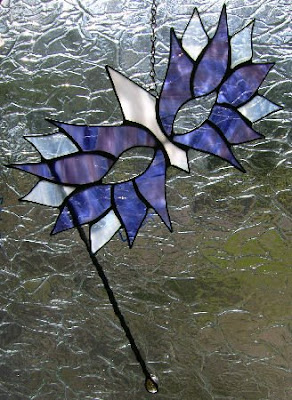 Janice has completed the first of her three windows for the front of her house. The windows are actually a set of 5 for which she'll be doing 2 different patterns that will alternate. Each window will have the diamonds running along both the top and the bottom. The pattern for the second set of windows has yet to be decided on but it will be similar to this one that she's already made. Janice has the other two centers cut out for this pattern so we'll see some immediate results on her second window when she returns to class in two weeks. 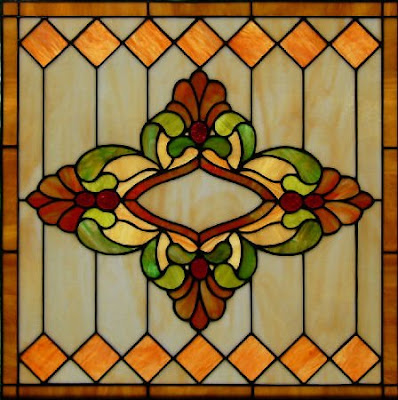 Sheila was kind enough to send us these pictures of the windows that she made. It's one thing to see them pictured in the shop but it's always a treat to see them installed where they were made to be viewed. They really add a lot to the furniture they are installed in. We hope to see Sheila soon. :-) 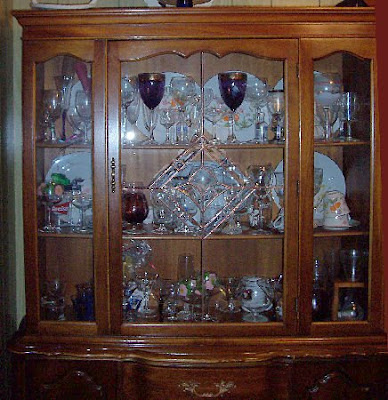 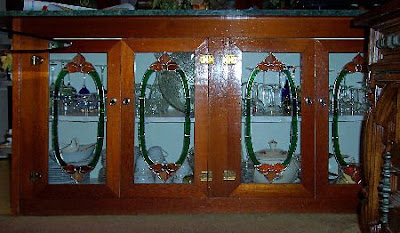 We had Jane begin work on her latest Birds and Birdhouse window. I believe this is the third time she's making this one. It's a lot of tiny pieces but it really pays off in the end. Jane's next project will be a fireplace screen. I have the pattern just about drawn up for it.

And lastly we have Michael Ann's window. With the center all tacked together she was able to cut out a lot of her background glass as well as the diamond pieces the run along the edges and center. She's taken the pieces home to wrap and I suspect that the rest of her background will be cut out during her next class. 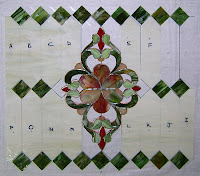 And that about wraps it up for this week. Once again, there is no class scheduled for next week. I'd hate to have anyone show up only to discover that the shop is closed. Have a great 2 weeks, we'll see you when we return! 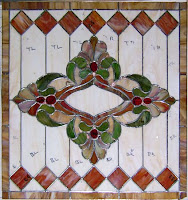 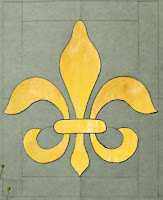 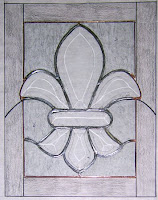 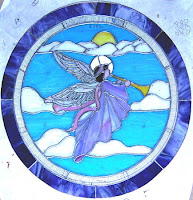