Even though we haven't had classes in 3 weeks we still have students sending me pictures of things that they've been working on while at home.  So, without further ado, let's see what they've sent.

Linda F's finished her Underwater Scene and the work is wonderful.   I may have cut and attached the zinc channel for her but the rest of the work she did on this window speaks for itself.  It's tranquil but bright, as well as uplifting but deep!  In other words, it's perfection. 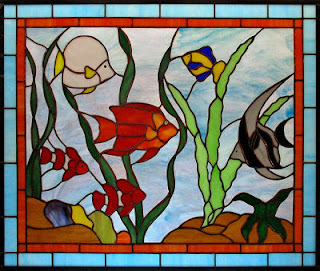 Cindy's pair of Roosters turned also turned out stunning.   The patterns and colors are the same between the panels but the background glass that she used differs between them.   The one on the left uses glue chip glass for the background while the one on the right is made with a clear reeded glass.  Both look great and better yet both background were cut from scrap glass that Cindy had lying around just taking up space. 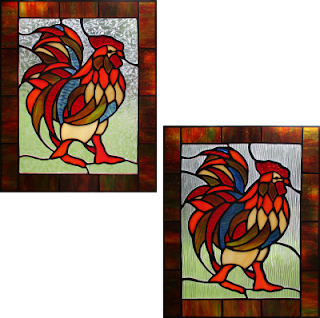 Lisa made this Beveled Tulip Panel from start to finish while at home all on her own.   The pattern, the cutting, the borders, and even the hooks (which I cropped out of the picture) were all done at her house without any help at all.   In fact, the only thing that she even called about was to get two sheets of glass for her next project!   Yep, she's a success story for sure. 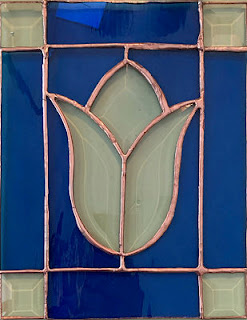 Barbara H sent me this picture of one of her Butterfly Flowerpot Ornaments completed and adorning one of her many flowerpots.  Not only is her Butterfly beautiful but the flowers that surround itare equally as impressive! 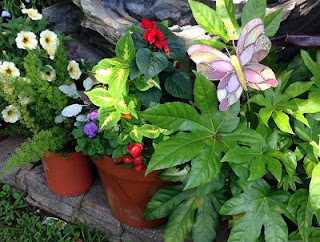 Shelley completed the large Mermaid Suncatcher that she's been working on and she's all set to start another window.   Shelley has an affinity for mermaids and therefor she worked very hard on making this look great as you can see for yourself. 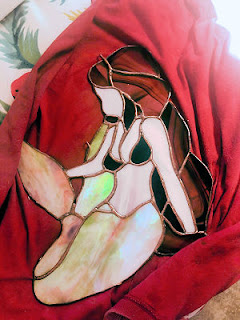 Then we have Tracey's Mother Mary Window that is really taking shape now that she's begun grinding it.   It's looking nothing short of excellent to me and I know that Tracey is more than capable of getting this ground, wrapped and tacked so that it can then get its fancy triple border cut out. 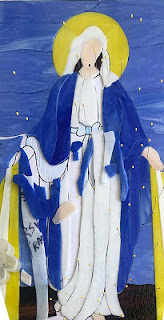 And Mary Grace has putting her 'spare' time to good use by cutting out these 6 Crystal Hangers.   These are the larger variety of this popular suncatcher which frames both a Chandelier Crystal as well as  the circular jewel that resides above it. 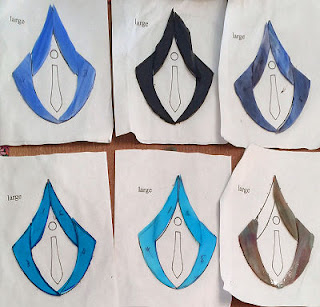 It's nice to see students working at home and making such grand accomplishments.   Myself, well, I've been lazy and aside from drawing up a few patterns I haven't cut a piece of glass in at least 2 weeks now.   And as I type this I realize that it's well past time to get back on that stained glass horse and ride!

Posted by Bayou Salé GlassWorks at 9:31 PM No comments: