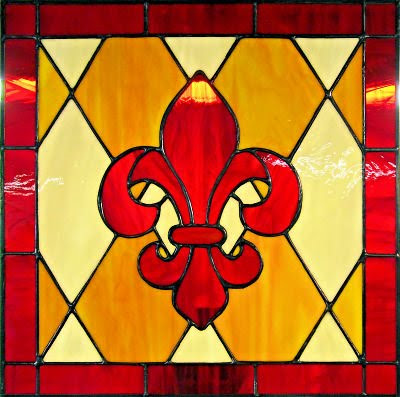 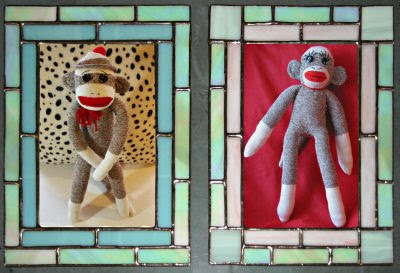 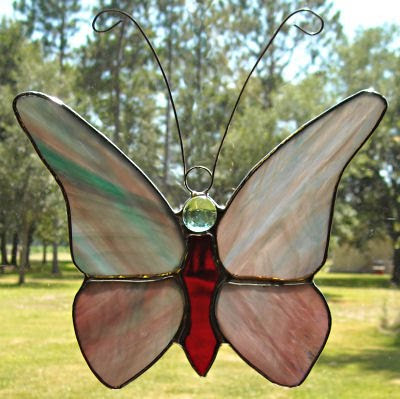 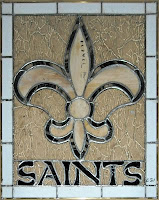 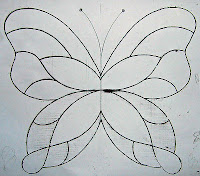 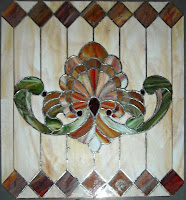 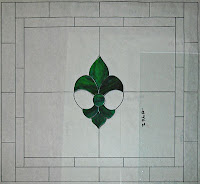 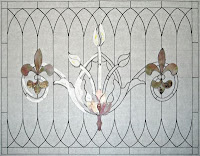 We have 2 new butterflies to show you this week. That means we have 2 new students that we'll need to get acquainted with here on the Blog. Michele and Lisa began their first night without a single problem. They cut the glass, they ground it, they wrapped it and even soldered it without any fears at all. And that's how we ended up with these 2 beautiful butterflies. The first one here is Michele's (I hope I didn't mix them up): 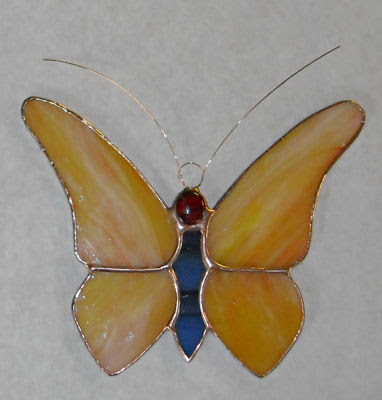 And the second one here is Lisa's. They both have definite idea's for what they want to do for their first projects so I can't wait to see exactly what they pick. 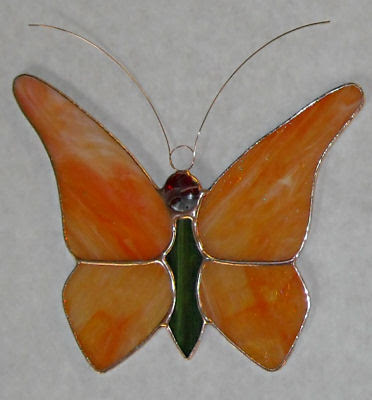 Julie came in knowing that she's be soldering her window. She took her time and got the entire front side finished. Now all that's left to do is this top section of the back. That means that there is no doubt that this will be going home with Julie when she comes in next week.

Patty began working on 2 frames. She almost has the first one all ready to solder with only the 4 corners left to cut. The second one is all cut and ground and she's taken it home with her to wrap. My guess is that these will be finished next week! 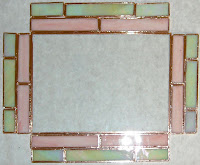 Roxie has all 6 of her Fleur De Lis' cut out and 5 of them are ground and ready to be wrapped. For one reason or another the 6th one didn't make it into this photo and as the photographer you'd think I would know why this is, but I don't. Just take my word for it-- they're all cut! Next week Roxie will be wrapping and tacking her FDL's together in preparation for their backgrounds to be cut.

Look out, Suzie's on a roll! The colors in her first window already look great and this is just a picture of the window lying down on the table. With her border all cut and wrapped she'll be soldering this one next week and possibly completing it. 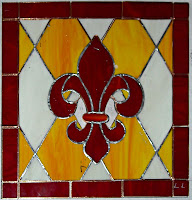 And last but not least, we have a look at Yvette's Peacock window. She spent the class in front of the grinder and got almost all of her feathers ground. I put a red line on the picture to show you exactly what she got accomplished. The righ side is ground and the left side isn't which means that all she needs to do is grind 9 more feathers and then she'll wrap and tack them together. I can honestly say that this window is really falling into place now. 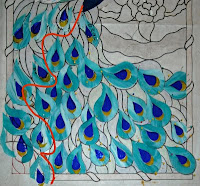 I have one more Blog Post to get us up to date and with a little luck that will happen on Wednesday morning. Expect to hear from us soon!

It's been busy here at the bayou both inside the classes and outside of them. We've got new students about to start classes just in time for the heat of mid-summer. All I can say is thank God for air conditioning!

Cheryl started this Fleur De Lis window last week and at the end of class she only had to solder it. So she took it home and did that work there. When she brought it back in the door tonight all I had to do was add some brass channel around the window and then 2 hooks to attach the chain it will hang by. As you can see it's another winning window by Cheryl. 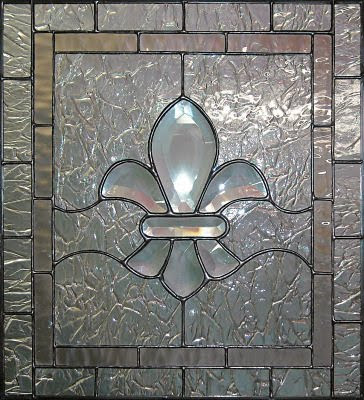 Yvette has finished cutting out all of the teal colored sections of her peacock feathers. And she did it with a broken ankle. What a trooper! This window is really taking shape now. Next she'll grind what she's got cut out and then tack it together so the rest of the straight feathers will be easier to grind when she cuts them.

Janice got her center piece tacked together and cut out the upper part of her window, ground it and even tacked it together. Next she'll get the bottom section and the triangular fill ins that square out this window. 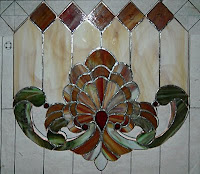 Grace tacked the logo section of her Saints window together and the lettering that spells out Saints. She cut the background of the letters and got most of them ground (though it's hard to see in the photograph) This one needs a border and some solder and then we'll call it finished! 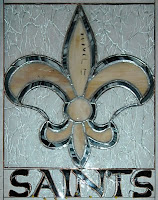 Cheryl finished her Fleur De Lis Bevel window with plenty of time to spare this week so before she left we had her tack her turtle and then grind all of her bottom sea floor. She's taken that home to wrap and then there's just a fish and the water left to go on this one.

We're behind on the Blogs again. Come back Tuesday morning for another addition to help get us up to date again.

This One Has No Title

Sock Monkeys are the rage. And unlike real monkeys they are hardly scary at all-- or so Patty tells me. Hers certainly looks friendly enough now that it's completed. You've got to love the glass beads that Patty picked to use for Naughty Margret's earrings. They're pretty classy for a sock monkey! 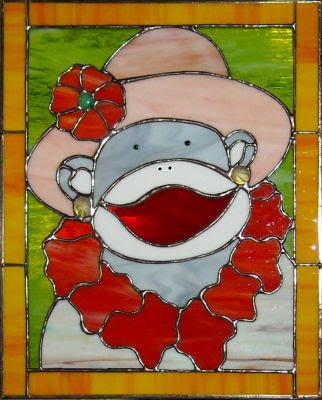 Suzie is moving right along on her Fleur De Lis window. She has everything but the border cut out and she's got all but 8 small pieces ground and ready to be wrapped. As always, rather than wasting time she took her pieces home to wrap so when we see her again we should have the border cut and the entire window tacked together and ready for solder. 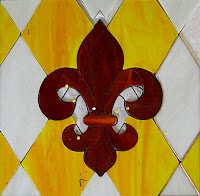 And speaking of tacked and ready for solder, Julie has her Iris window all wrapped and ready to be tacked. I figure she has 2 weeks of soldering and then we'll get to see this one completed and pictured along side of her first window. I think her doors are going to look spectacular! 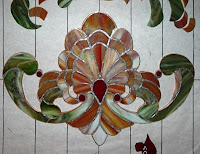 Roxie, like Janice, is working on multiple windows now also. She's working on 6 Fleur De Lis windows in 3 different colors. In other words, 3 sets of 2. She's got 5 of the Fleur De Lis' cut already and would have had the 6th one completed also had she not run out of glass. She's on a roll now!

Grace resumed work on her Fleur De Lis Saints window. If there was any doubt that this window pertained to the Saints then she certainly made it clear when she added the word "Saints" across the bottom in black glass. I believe she said that she was going to finish this one with a double border. All the little extras that she's adding to this window help make it one unforgettable piece of glass! 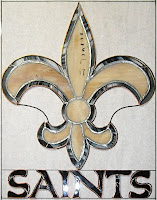 And lastly we have Cheryl's latest project. She stopped working on her Turtle window to get this one started because it has to be done ASAP. I'd say she's done very well since all it needs is the border tacked on and then some solder. And to think that she started this in class just this week. 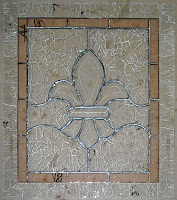