On The Eve Of Thanksgiving

We had 5 students in on Wednesday night even though it was Thanksgiving Eve. I call that dedication!

When I last saw Steve he walked out of the shop with a brand new grinder and his unground window. When he walked in Wednesday night (not even a full week later) he had not only finished grinding his window but he had it foiled as well. He tacked it together in class, got his border both cut and tacked and then began soldering. He's doing great and has taken it home with him. I highly suspect that this will be a completed window next week. 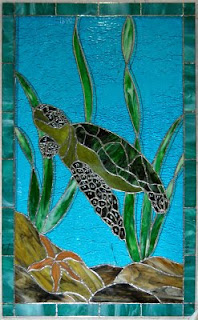 Meanwhile, Louis managed to complete cutting both of his tropical fish for his window. He seems to be completely comfortable with his cutter now and when he moved over to the grinder he watched me grind just 2 pieces of glass to demonstrate and then he jumped right in. He got a lot accomplished and I suspect that he'll be wrapping glass after his next class. this is going to be a nice colorful window and Louis should be proud of the work he's accomplished. 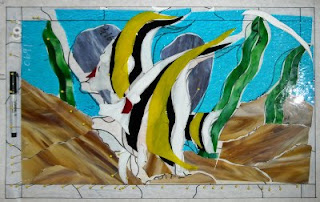 Janice has decided to work on Birth Announcement box which is simply a Wedding Box with a picture instead of a wedding invitation. She's making the Entwined Hearts pattern with colors matching the birthstones garnet and turquoise. She'll finish the background next week and then move on to smaller beveled boxes because the baby this is being made for will most likely not be born yet. Without a birth we can't have a picture and without a picture we can't finish the box. But the hard part will be completed. 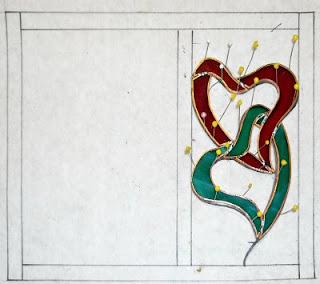 And speaking of small bevel boxes, guess what Grace worked on this week? She wrapped the bevels for 3 boxes and got the tops completed for all 3. Next week she'll have the bottoms assembled and we'll attach them and call it a night. 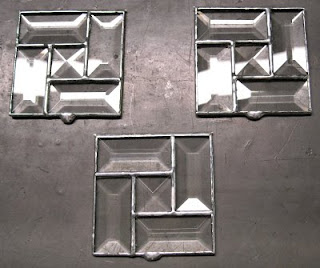 Now you may be saying to yourself, But wasn't Grace working on a Fleur De Lis / Tiger Eye window last week? Well yes she was but after she cut out all the purple glass early on in class she decided to move on to her next project and do her grinding at home. Here's the window you were all wondering about. 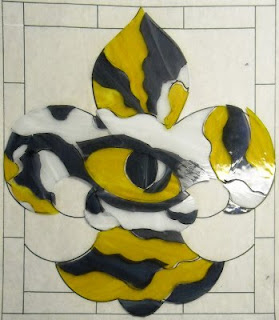 Okay, I have to say that I was completely impressed with Cheryl's work this week. She's emailed me and said that she never got a chance to work on her window while it was home so she would be grinding when she came into class. The amount of detail this window has made me believe that she's be grinding for 2 classes but was I ever wrong. In one class she got the whole thing perfectly ground. An exact fit is necessary for a window like this because if you're off at all your eye will pick up the lack of symmetry and it will just look awful. As you can see in the picture below that's not the case here! 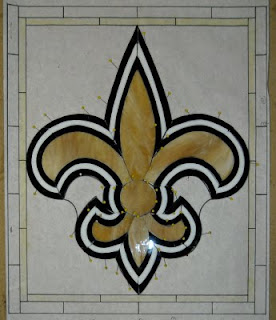 Rather than being slaves to an oven on the night before one of America's biggest feasts we were all laughing at each other and cursing our broken glass. Either way, we all had fun.