With everyone's Christmas projects completed there was a calm in the air during classes this week. No more rushing to get those windows finished -- just a lot of laughing throughout the shop as work was done at a nice steady pace. I only just realized that Peace on Earth happens AFTER Christmas actually passes. :-)

Anita came in all worried that she'd screwed things up since she soldered that back side of her Panda Window first but we managed just fine. And low and behold-- it's finished! The eyes and the mouth came out really nice. You can't even tell that we cheated on them by painting a black pupil on the 2 eyes. And then we cheated again when we added a piece of wire to the right side of the mouth to make sure that Anita's Panda is a happy one instead of a Panda with half of a mouth. You've got to admit that this looks great and that it's hard to believe this is only Anita's second window. 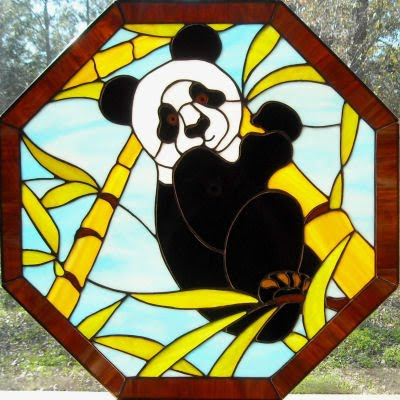 Would you look at how fast Terry is moving on her Madi Gras Mask window! Now that it's all cut out she spent the night working at the grinder until her hand just about froze off in the cold water that we have in the shop. If you enlarge this picture you'll see that Terry has used pins VERY liberally to hold her pieces in place. She gets 2 gold stars for that because most students try to get away with using as few pins as possible and then have trouble getting their projects to fit after they're all wrapped. But this one is going to go back together perfectly. 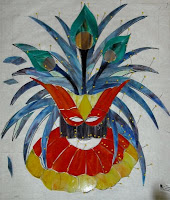 The front of Pattie's Shrimp De Lis is just about soldered now. There's only the back side left to go and then she'll add the finishing wire work to complete this window. I'd say that this one will be in the spotlight next week. It's going to really look different when it has all the extras attached and some light behind it. 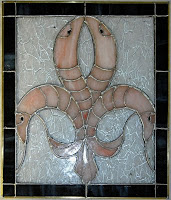 Myrt began soldering the front of her window after deciding that red was going to be the color for her border. We played around with different colors but the red was the one that stood out nicest. The front side is pretty well completed which means that this may very well be finished next week.

Jane seems to be recovered from her surgery and has managed to get all of her 1st lamp in this series tacked together. She's not entirely sure if the next one will be the same pattern or not but if I had to put money on it I'd say she'll be cutting out a second one of these very soon now.
The good news is that the second one always goes together easier and quicker than the first one. 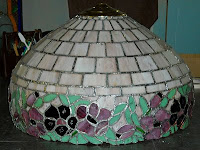 Ceil liked the changes we made to the fish in the upper left of her window (the original fish looked like something from a Science Fiction movie). Now it has recognizable fins and an actual fish face. She and Anita will be finishing this window as a team and they started doing that this week when Anita helped cut out one of the two fish that are now in place on the pattern with the leaves. Yes, this is a big project but it will be completed quicker than Ceil may think. Once the fish are cut the water will go quickly and then it's just a matter of grinding everything.

Roxie started her newest window this week. Would anyone care to hazard a guess as to what it might be? This will hang on her front porch when it's completed and I do think that will happen soon since the hardest part of this window is cut and ground already. In fact it's home with Roxie right now probably being wrapped as you read this. Next week I'm hoping that I can stop referring to the numbers as letters and possibly reduce the ribbing that was made at my expense. :-)

And that's what happened during our final classes of 2010. Happy New Year everyone!