Our Blog titles almost always come from something that was said in class. Most times they make no sense to the casual reader but if you were there in class when they were originally spoken I can guarantee that a smile will cross your lips when you spot the phrase here atop the Blog. I just wish I could remember all the things that are said because sometimes I think we're spending more time laughing than cutting glass!

This week we're going to start with a look at Bonnie's Medium sized Fleur De Lis Window. Bonnie has caught on quickly and is making some quality windows, don't you think? These Fleur De Lis windows are always stunning if the student takes the time to make sure everything lines up perfectly. As you can tell, Bonnie took the time. 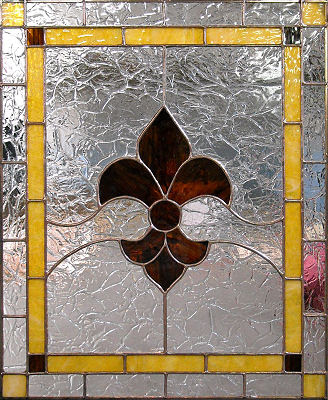 This is the 3rd and final panel in the large set of windows that Janice is making. As you may recall she's currently in the middle of making more flowers to be cut into the same color background, the only difference will be the size of the window. Her next set of 3 will sit atop these large windows and be about a third of the size of these. 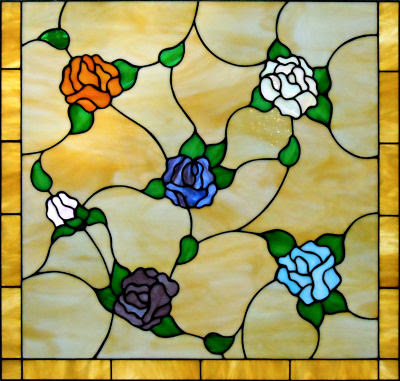 And here's another Fleur De Lis window, this one made by Terry. She wasn't sure what to think of it when she saw it completed but I like the design. She simply quartered off the pattern and used 4 different colors in a way that most people wouldn't think of using them. And as I said, I think it's a novel approach to a standard window that makes you take notice. 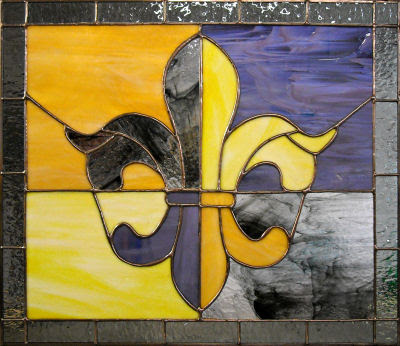 Terry's Wild Kingdom Window (formerly known as Fish eating a Shrimp) is so very close to completion that is isn't funny. There's just the back side to solder so we'll be seeing this one with light behind it next week. 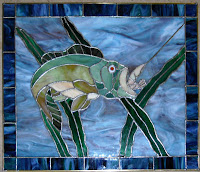 With the front of her Peacock window almost completely soldered I think that Sonia will be wrapping this up within a week or 2. We still need to add the Zinc Channel and make touch ups but the bulk of the work is done on this one.

PeeWee has also completed all the cutting on his windows. Making 2 at the same time was a smart move because you get to keep your work rhythm. For example, why would you cut the 7 pieces that make the Fleur De Lis, grinding them, wrap them and then tack them together, only to start the process over again? It's far easier to simply cut the 14 pieces that make up the Fleur De Lis and grind them all at once. When making multiple items I always advise making more than one at a time.

And cutting things out all at once is exactly what Dianne did with her 2 windows. This week she got the first of her 2 windows ground and next time around she'll have the second one ground. In between grinding sessions she'll be wrapping these pieces while she's at home. I have to say that I was very impressed with the way she got this window to fit together. I watched her start grinding, then walked away and when I returned later on she was completely finished with it. Good job Dianne!

Patty's adding the final Shrimp to her boil. She better check to make sure that Terry's fish isn't eating any of her shrimp. Those things are hard to cut and grind!

Cindy resumed working on her hand mirrors. She has about 9 left to go and what you see here are 3 mirrors cut and ground to the pattern all lying on top of each other. (Another example of doing many of the same pieces at the same time.) She was grinding the blue petals on the upper right flower when I snapped this picture which explains why you are seeing multiple colored flowers.

And Roxie's Fleur De Lis box top is all set. Next week she'll make her box bottom and hinge it together to make a completed box. I have to say that Roxie's soldering is superb! Roxie is talking about making some more butterfly faeries when this is completed.

We're almost up to date again. I wonder how long it will last this time around. We have the new drawings for the next Church windows that we're making almost completed so I'll be spending a lot of time in the shop again real soon now.