He's a Clown, That Charlie Brown

Everyone has something exciting going on and if they've finished a window last week then they have something else about to be unveiled.  There's never a dull moment here in the shop so let's take a look at what our students have been doing during classes this week.

Shelley's Mermaid Window is a definite winner.  I have to note that this is her first project because it looks like something that a seasoned glass professional might make.    The pattern was discovered online but we altered it a bit to fit the size she needed.  What you might not immediately notice is that Shelley used two different background glasses that are very similar to give the background a little more flair.  It's nothing that screams "LOOK AT ME!" but because of that its subtlety gives the window that much more charm.   Less is more, especially when dealing in Stained Glass. 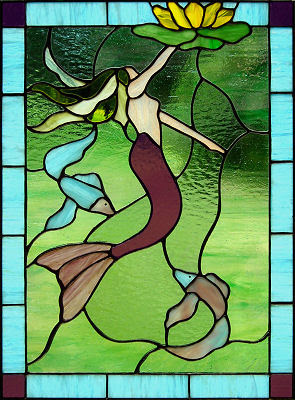 Susan completed her second Pumpkin Ornament and I really like everything about it. The size, the shape and then the craftsmanship make this is one cute pumpkin.  This would also make a great suncatcher as well as a lawn ornament so if anyone out there is looking for a terrific Thanksgiving/Halloween design this might just fit the bill. 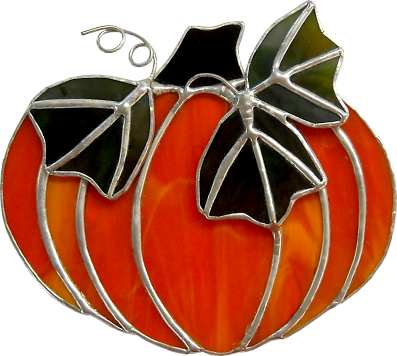 Bonnie's latest Sunflower design was another quick finished project for her.  Using the back side of a piece of Spectrum Granite Root Beer glass made a perfect flower center.  The texture really shows up nicely and adds to the realism of the piece.  Well, Bonnie's next project won't be done as quickly but mark my words when I say that it's going to be stunning.  You'll see what that one looks like next week. 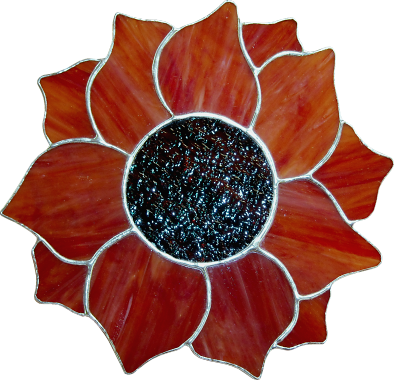 Ann's newest window is a very complex geometrical design that only measures only 12 by 8.5 inches.  When you count the pieces (and what you see isn't even all of them) you'll find that Ann is going for a lot of detail in this window.  Or should I say THESE windows since she cut not one but two of them out.  This is the first one set up and ready to be ground. 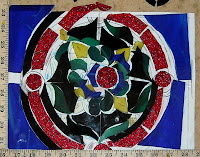 Lynn managed to cut a lot of this lower oval section of her window while she was at home and I have to say that she impresses me very much.  Lynn isn't afraid to grab the bull by the horns and make the most of it.  When she came into class she started grinding this and by the time she left she had already begun to wrap the pieces.  Once this is tacked together she'll be able to quickly cut her background glass and have this oval complete and ready to set into place with the rest of the sections of this window.  She did a great job grinding this considering she had to really make use of the small quarter inch grinding head which can be a real P.I.T.A.!

Martha has begun working on her second window and it's a stylish interpretation of a classic design.  It's a Fleur De Lis (or an FDL if you're a regular reader here).  She's going with an elegant double border and a gorgeous piece of root beer/amber that's going to make this really stand out nicely.  And she's cut two of these FDL's out so expect to see a pair of these windows in the future.

Myrt is grinding away on her Humming Bird and Flowers window.  She's got the bottom right corner  bird and flower just about under control.  I must confess that our grinder wheels were pretty bad so that slowed her down a bit but new wheels have arrived and are now on the grinders which means that grinding for the next two weeks or so should go a lot quicker. 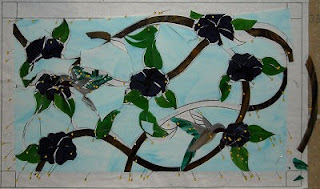 Patty has all of her ducks birds laid out in a row and not only are they all ground but they're all wrapped as well.  True, they're all blind as bats at this point in time but once we have this all tacked together (next week) she's going to work on getting all of their eyes cut and fitted into place as well as the branch that they're all standing on.  After that it will be a quick solder job and then she'll move on to her next window.

Yep, this is exactly who you might think it is.  Sonia is a Peanuts fan and in this classic Charlie Brown picture she's added a setting sun that makes you ponder just what CB (and Snoopy) are thinking.  It's a really peaceful scene and judging by the glass that she's picked out for it I can safely say that this window is going to gather a good deal of attention.  She only has the flesh cut out and it already looks great! 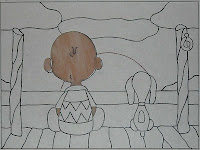 Terry made some INCREDIBLE progress with her Victorian style window this week.  She has her background completely cut out and tacked into place.  All this needs is a border but I think she'll be working on the background of this design's sister window when she returns next week.  Yep, she's making two of them (like so many other people in class) and she has the center of the second window all tacked together already.  I think we're going to be seeing  a similar picture here next week.

And last, but certainly not least, we take a look at the window that Cindy is currently making.  She's pulling a 'Gerald' on us by working the way he (one of our favorite former students) used to work:  By cutting all of one color, grinding it to fit in place and then moving on to the next color or section.  It initially looks like the project is moving slowly but once it's all cut it's all ground  you'll see an immediate fast forward on the work since she'll be able to 'skip' the grinding process.  I even sometimes do this myself depending on the project.

So that about wraps things up this week.  We've got a lot in the works here so be sure to come back next week so see what's completed and what's about to be completed.