Well, we're back after a brief (3 day) evacuation due to Hurricane Isaac.  After returning it then took me a week to get everything (pictures and text) in order for this particular post.  So although this is a week late I actually have all the pictures ready for our next post which will happen VERY shortly.  If you think your completed project may has been skipped this go around don't worry-- it will most likely make its appearance in the next post in a day or so.

Let's get this post started off by looking at the first of a pair of windows made my Terry.  What you see here is the completed version which is far prettier than its sister window which is still a work in process.  The off-white background (or Darryl Glass as we like to refer to it) really makes the center work stand out.  I've always been a fan of the symmetrical design windows and this one by Terry just makes me like the design even more. 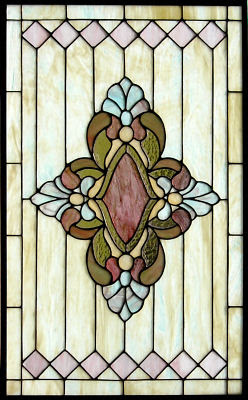 Now we'll take a look at the second matching window that Terry is currently making.  It's amazing what a difference there is when all that's really changed (besides having all the chemicals washed off of it) is a little light behind the window.

And Terry didn't stop there.  She had replaced a number of pieces from the pair of windows you saw above because she didn't like the color.  Rather than waste the glass she designed this window around all the pieces of glass that she already had already cut and ground.  And it's a wonderful window in its own right and it only needs solder on the second side before she can call this completed. 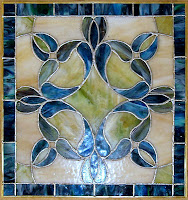 Bonnie is making some serious progress on her Hummingbird Window even though we didn't have all the glass for it when she came into class.  The glass for her flowers and the remaining leaves was still on a UPS truck so Bonnie simply cut out both of her hummingbirds which she DID have the glass for.  Then she even ground one of them before calling it a night!  Of course the missing glass arrived the very next day but that didn't slow down Bonnie's progress  at all.

Next up we take a look at Cindy's Pelican Panel which is almost completed.  All the glass cutting is finished and all she really needs to do now is attach the border pieces and then solder the back side of it.  I love the wooden post that the Pelican is standing on -- the fact that it cuts straight through the border really gives it a nice 3D effect.

Lynn has completed the "G" section of her window and all of the beveled pieces are wrapped, tacked and in place for this picture.  It's moving along nicely and Lynn has decided to add a few accent pieces along the lead lines in the background that will make the windows design flow even more.  Outside of the border we really don't want to see any straight, harsh lines because they would distract from the gracefulness of the design.

Martha now has all of her Fleur De Lis cut and ground.  One of them is already tacked together and the other two are just waiting to be wrapped/foiled.  Once she has the remaining 2 tacked together she'll start cutting and assembling the backgrounds.  We've seen a lot of FDL's here in the Blog over the years but these are one of the fancier, difficult ones to cut out.  There are plenty of deep, inside curves that can only be accomplished with the help of a grinder (with a good wheel on it!)  That said, Martha is moving along like a champ. 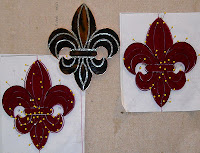 Patty's birds are flocked and ready for solder.  All of their eyes are cut and in place along with the wooden perch that they are all standing (sitting?) on.  With everything all in order here and the soldering process having been started on the front side of this project I'd say that Patty is well on her way to taking this piece home with her shortly.

Roxie has decided to make a few birds of her own but she's making the same one over and over.  What you're looking at is Roxie's 2012 Christmas gifts and once again she's really ahead of the game.  She plans on making these in assorted colors and as you can tell by the beaks that you see cut out Roxie plans on making at least 4 of these gift birds.  That means she may only have 33 pieces left to go (unless she decides to make even more of them).

Susan has always working ahead of time when it comes to seasonal items.  This Snowman lawn ornament that she started last week is all ready to be soldered together.  But Susan is also ready to start on her next project and she's pretty excited about getting to it.  Check out the next picture for more details. 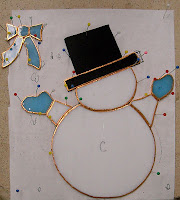 Here's a look at the window that Susan can't wait to start.  It's an LSU tiger with a few hidden treats.  The state of Louisiana has been incorporated into the pattern as well as the words 'Geaux LSU'.  The words may be difficult to spot in the drawing but once you see them it's hard to not see the hidden letters and the state outline.  It's sort of like the hidden arrow in the FedEx logo.  I can't wait to see this window come together over the weeks. 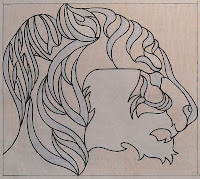 Lastly, we had Fran come in and work on repairing the Fish window that she made a few years back.  Try as I might I can't find the original picture even though I know it's on a disc somewhere.  I guess I need to get a little more organized!