Since this post is all about getting up to date let's not waste any time and just jump right into things by taking a look at Susan's incredibly detailed Fleur De Lis/Gloves/Football Window  The window is barely a foot and a half wide so when you take into consideration 4 inches of borders you can easily see that the center section isn't very large at all.  A lot of Susan's pieces had to be wrapped in 3/16 foil so the lead wouldn't just swallow up her pieces whole.  Until you actually see this window you have no clue just how many pieces make this window up.  And every line is spot on.  People tend to think that just because a piece fits where it belongs it's correct but I'm going to point out that it's possible to put a round peg in a square hole if the peg is small enough-- that doesn't make it look good though.  Susan never cheated and if something was over ground and the fit wasn't perfect she re-cut it.   I wish you could see the actual window because this picture doesn't show all of the work involved in this. 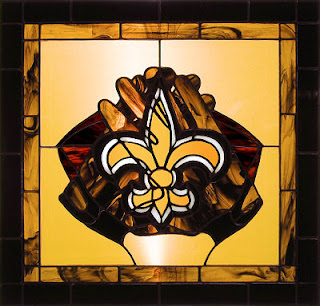 Jane completed her Circular Rose Window and it's stunning.  The stems of the flowers are made with lead lines and she made sure to leave a gap between the glass so the lead would be thicker and not become lost in with the other lines that make the pieces possible to cut.  It's a subtle effect but you subconsciously notice it even if you don't pick it out right away.  I like how Jane decided to use all cathedral glasses.  There's less shading since the color is evenly distributed throughout the glass but it makes for a bright, vibrant window. 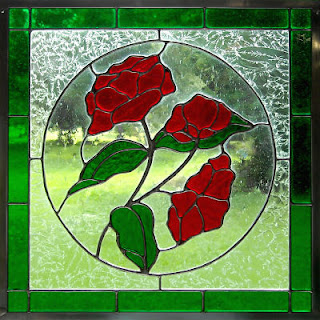 Terry went the same route (Cathedrals) with her  Faux Bevel Window and I think it looks much better than any bevel cluster could ever look.  The use of only one color and the extra attention to make sure that everything is perfectly balanced makes this one elegant looking window.  If a flower is off a bit you don't notice it, but in a geometrically designed window you will spot little imperfections with ease if the window isn't symmetrically perfect.  This is sure to be another project that everyone talks about in class this coming week. 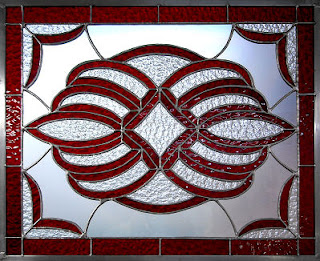 What's this?  A Butterfly?  Well, that can only mean one thing-- we have a new student!  Mary has already taken classes elsewhere so during her first class with us she made the butterfly so I could see where her strengths and weaknesses lie.  But the joke was on me because Mary appears to have no weaknesses!  She did wonderfully and I have to say that I can't wait to see her begin the pattern she's picked for her first project with us. 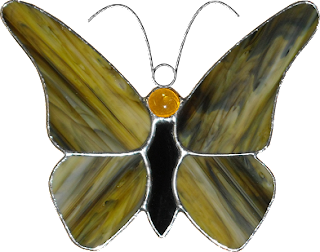 This next project is an old favorite that we haven't seen done in a while now.  It's a beveled 3D Star and we had three of them made this week.  Tim and Donna had wrapped most of their bevels for this last week before they headed home so they knew they were going to make Stars when they came in.  During the week Jane decided that since everyone else was making stars she might as well also.   So we all sat at one table and at the end of the night we had three completed Stars on the table.  Rather than posting each of them (they all look identical) we're just going to show it once and state for the record that Donna, Tim and Jane each made one of these wonderful hanging ornaments that send rainbows dancing all around the room if placed in the sunlight. 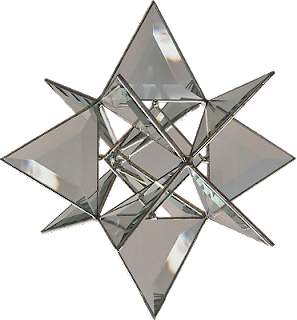 Now I wonder who could have possibly completed this window?  If you can't  connect the Lady in a Window with Brenda at this point in time then you aren't reading the Blog enough!  Her window is now 100% complete and it cleaned up wonderfully.  I'm so used to looking at stained glass women with no faces that I can't get over just how beautiful this one looks with her face painted onto the glass.  I'm going to assume that green curtains are currently the rage since Shelley had them in her window last week as well. 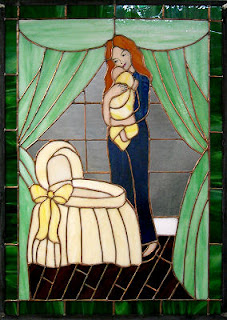 And, of course, Brenda didn't stop there.  Now that her Woman and Child window is completed she's resumed work on her Fish window.  It's still in need of some grinding but I don't have any doubts that she'll have this fitting together before we know it.

This week we got to see Myrt grind all but about 5 pieces of her Pelican Window.  That means that this is ripe for foiling already!  I'm unsure if Myrt has a border glass picked out but that won't take long to pick out at all.  Especially with all the help she has in the class when it comes to deciding what looks best.

Betty's Victorian/Geometric Window is very near completion now.  She got her clear textured border cut and tacked into place and then added some brass channel to surround it all.  Once that was done she began soldering and has taken it home with her to complete the job.  She has a great deal of the front soldered already so I'm thinking that we'll see this completed when she returns in 2 weeks.

Terry's second work in progress this week is a repeat performance of her Hanson LSU Tiger Eye window.  The colors might be slightly different in this one but the overall effect is the same.  This one seems to have been knocked out in no time whatsoever which proves my old point-- you can almost cut the time it takes to make a second window in half.  Once a window is 'familiar' to you it's easy to move along quicker than you did the first time. 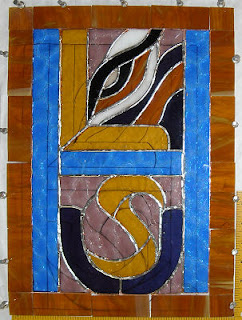 And Cindy's Mirror is all tacked together with the zinc channel attached.  In fact, it's even halfway soldered!  All you can see is the ceiling reflected into it so it looks a bit colorless but trust me when I say that this is beautiful.  And since Cindy needs this ASAP I'm sure it will be completed before her next class is over. 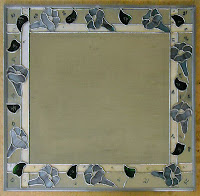 Linda's been working on the same Victorian/Geometric window that Betty has been making and they are in a dead heat when it comes to who will finish theirs first.  Linda came up with the original design and Betty started hers a week later but then Linda missed a class which allowed Betty to catch up with her.  In the end things are going to return to normal because Betty won't be able to attend class next week but Linda will.  And since Linda is soldering this I'm going to say that she'll wrap this up in her next class exactly one week ahead of Betty (This isn't a race though!)

Let's look at Martha's Dragonfly which is now ready for solder.  With both of the borders attached and her brass channel  finishing it off this Dragonfly is going to be flying out the doorbefore you know it.  And then it will be followed by the large Angel window hanging that she started a few feeks back.  (Apparently Martha is into winged things).  She loved the border on her frog so much that the color scheme followed through onto this window as well-- an ornage border picking up the orange highlights (in this case the Dragonfly body).  I can't wait to see this lit up! 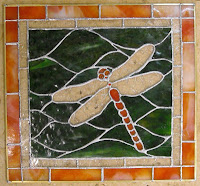 Mary Grace has a window with the same basic border/background pattern that Jane's has-- A circular square.  But the circle section is a different as can possibly be involving a humming bird surrounded by flowers.  This week she finished up the flowers and the bird and then got them all tacked together.  When she comes in again she'll learn the easy way of cutting out a background using the pieces that are already cut and ground as a pattern.  It may sound complex but it's as easy as can be.  Mary Grace has her background circle cut from glue chip and will begin carving it all up when she returns. 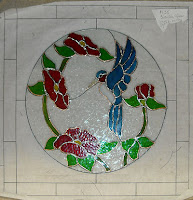 Next up we take a look at the new project that Shelley has started.  Her pattern was all ready so when she came in she traced it all out onto pattern paper and then cut that up into the individual pattern pieces.  She'd already picked out her glass the week before so she started cutting out the green shrubbery, the water and then even started cutting out some of the land.  The face to the dog isn't quite worked out yet as to how she'll cut it, but she'll cross that hurdle when she comes to it.  And rest assured, it's a hurdle that isn't all that high.  :-) 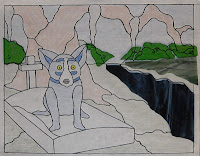 And rounding out our update we take a look at Bonnie's newest project-- and it's going to be a fun one.  She's decided to work on a 16" diameter Baroque lamp with 3 repeats featuring a fair amount of gridwork thus making this a nice first lamp project.  She's taken the pattern home with her so she can cut out all the paper pattern pieces and the template sections before class starts again.  Bonnie's already picked out all of her glass and hopefully it will be in soon so she can start cutting glass rather than paper and get this party started!

And that's going to do it this time around.  Since our original Blog has disappeared due to lack of use (I couldn't post anything else to it since they wouldn't give me any more Hard Drive space) I'm currently assembling a database of all of our students and all of their completed projects.  Once that's done I'll change the student gallery on our website to include every project that has been done in class.  There were a lot of beautiful windows that are no longer viewable since the first Blog was shut down on us and I hope to get these windows available for viewing again soon.