A Pound Of Flesh

This update is a day late basically due to the fact that our Weekend Workshop was held this weekend and out 3 students wore me out!  We'll have another post shortly to show you what that was all about but right now let's focus on our regular weekly classes  and start with Cindy.

Cindy completed her Texas Star/Blue Bonnets Window and everyone was excited about how great it looked with many compliments passed around.  This was made as a gift and I certainly hope it's appreciated because I love this window.

Meanwhile, Cindy also completed this LSU window for her son, Chad.  He knew exactly what he wanted and told her just how to place the Tiger Eye, the LSU and the Football.  Then he came up with the alternating border colors to finish it all off.  But it was Cindy's hard work that really brought this window to life. 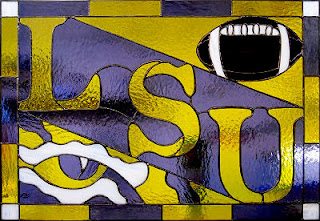 The we have Bonnie's Suncatcher Crosses which turned out lovely (as expected).  The glass jewels and bevels really dress up the crosses without going overboard making this a clean design that doesn't lose focus on the overall theme. 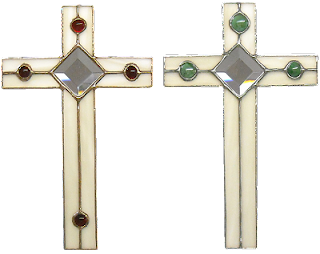 Last week the horse in Becky's window was missing but this week it's very obviously been cut out. There are just some green plants left to go (only 21 pieces) before Becky can begin soldering her second window with us.  And let's face it, this already looks great. 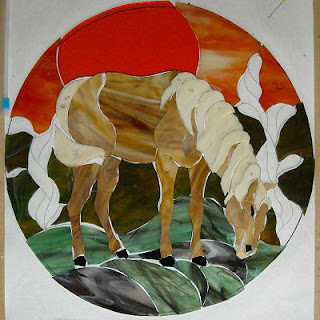 Susan's Panel Lamp is all soldered and ready to be put together.  That means that we'll certainly see a completed picture of this project when she comes back in next week.  In fact, the sides were joined together after this picture was taken which means that only the top needs to be soldered on before this gets washed and then colored.  All I can say is, 'Wait until you see it!' 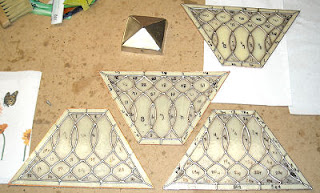 This is the LSU window that Jeanne is working on and it's all ground and ready for foiling!  I took this picture before the last 2 pieces were officially ground, but rest assured that they have been fitted into place and Jeanne has taken this home with her so she can tack it together when she comes back in and then add her final borders.

Bonnie resumed work on her Fleur De Lis Window and her Holy Mother Of All Crosses!  There's still one more outside trim to add to the cross but it's already shaping up to be something spectacular.  And the nice thing is that it's VERY easy to make. 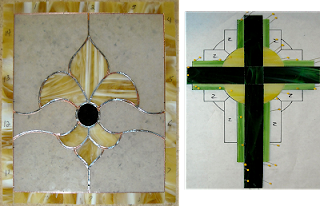 I have to officially state that I'm so thrilled with Shelley's work!  This window hasn't even been ground and it's already fitting together well enough for us to know what everything is in it.  with just the sky and a bird left to cut I'm suspecting that Shelley will be grinding this before we know it. 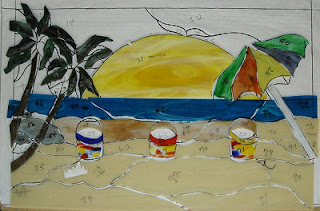 This is another window that I can't wait to see completed.  I love the circle border in a rectangle border design and the Rose inside it looks great.  Beauty And The Beast's version has nothing on this one! Brenda really accomplished a lot this week and this window is going to be another crowning achievement for her. 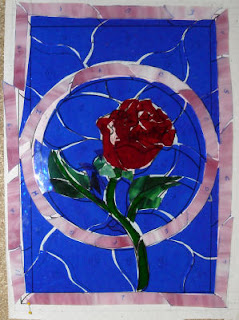 Martha has four of her Cross windows so nearly completed that it's almost a lie to say that they aren't finished.  All they need are some hooks and these will be set.  She has 5 others to go with 2 of them just needing minor touch ups and hooks.  I'd say her work here is almost done! 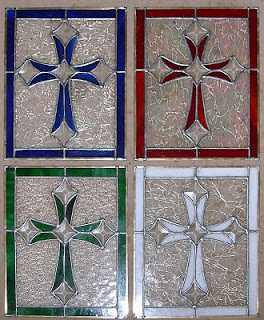 Betty, Linda and Mary have all made excellent progress on their  Nativity windows.  In the end there are minute differences between the three windows but not really enough to merit going over the same points three different times so I'm putting them all together so you can click on the picture and check them all out on a larger view side to side so you can hunt for the differences yourself.  :-)

Linda L came in and started wrapping her version of the 3D LSU window.  By the time she left it was completely foiled which means that when she returns next week she'll tack it, add the 2 borders and then tack it together some more.  I think she'll easily manage that in one class so I'm expecting to see this completed real soon now!

Mary Grace has decided to make an Eagle window and although she was happy with the pattern she wasn't exactly thrilled with the number of pieces in it.  But the thing is, most of the Eagle is cut out and that's the hardest part of this window.  It fits together nicely already because all of her pieces were cut inside of the line she drew on the glass she used.  Once this eagle is together the rest of this window will be a piece of cake. 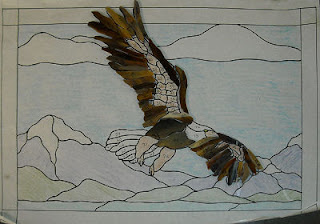 Next up is Terry's Flower window which is all assembled and basically soldered.  With the front completed and only the back left to go Terry will be looking for a new project to start next week! 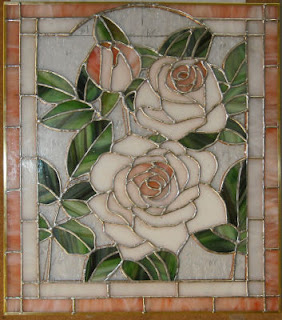 And lastly we have the wedding present that Ann has been worrying about working on.  Time is of the essence but this week she got her background all cut out and the front completely soldered so I'm going to say that this will definitely be completed on time.  Ann won't be in with us next week so we'll see this finished up the following week which is in time for the wedding.  What you're looking at is the back side so you can see there isn't much soldering left to be done. 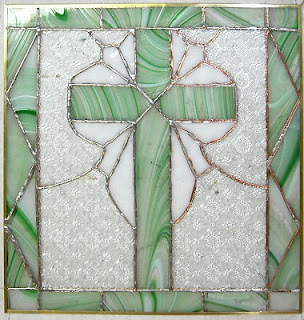 Hopefully we'll return to our suncatcher lesson next week (I really don't see anything that will stop that.)   There's going to be a second post before the end of this week so you can see exactly what went on in our Weekend Workshop so be on the lookout for that update shortly!