Wait a minute, didn't we just have an update yesterday?  Yes, but as you know we're a few weeks behind so this post will bring us up to date and get our shoes on the right feet so to speak.  This will be a short one because we didn't get back from our vacation in time to have a full set of classes.  That means a number of our regular students will be 'mysteriously' absent from this update.

One of our students who is featured this week has been missing in action for a while now because she's recently become a grandmother.  But Linda L. is back in action here at the shop and she celebrated her return to class by finishing her first project (an LSU window) with us.  As you can see, she had no problem making this whatsoever.  She'll be moving on to a stained glass box next week but right now let's give a round of applause to her first stained glass window. 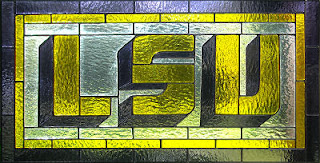 This is a sort of Mystery piece for me.  Betty brought it in and said that it was a group project that she had worked on with numerous other people (that I don't recall!)  Possibly Mary and Linda F had something to do with this, but then again, possibly not.  All I know is that this Angel is no fan of Atlanta-- she's an LSU fan through and through! 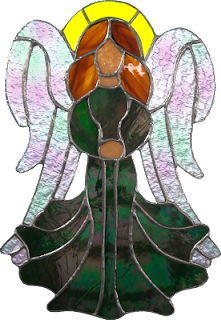 This window is no mystery though.  This is another Nativity scene that Betty completed this week.  I know she loves this design and I think she's at the point where she may very well be able to make it without a pattern!  Another job well done, wouldn't you say? 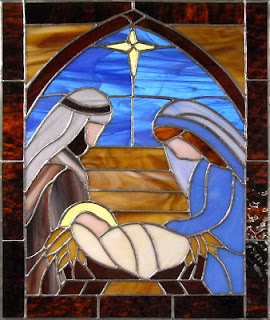 Ann came into class with her Stylized Fleur De Lis all wrapped in copper foil and tacked together.  She had originally picked a very heavily textured background glass but it wasn't a big enough piece so she couldn't use it, which was probably all for the best.  Why do I say that?  Because it was almost 1/4 of an inch thick and cutting complex curves in it was definitely going to be a trying experience since there would certainly be a lot of breakage.  But as you can see, Ann's replacement choice looks great and since it's all cut, ground and tacked together I'd say it ending up cutting beautifully.

Janet's cross window is a hit.  She was originally going to use a different color for the border but now that I look at it I think her first choice would have been somewhat nondescript.  From the picture below you'd think that everything went smoothly for Janet but she had a bit of a hitch when she left last week.  Apparently the board with all of her pieces slid in the car and everything got mixed up.  Alas, it only took a few minutes to figure out what went where due to the grain in the glass.  Repositioning the border was the hardest part and in the end we had to re-grind two border pieces to get the nice fit you see below.  But now it's perfect and Janet's got the front side completely soldered which means that this will be a finished project in our next update. 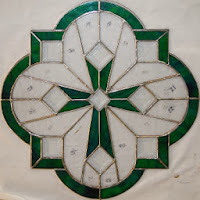 Bonnie's Tiger Claw LSU window is all cut save for the borders.  She's already begun grinding it and is making serious progress already.  Bonnie tends to do most of her work in class (spare time doesn't come easy for her) but she always manages to get a lot accomplished.  I think we're going to be seeing a string of completed LSU Tiger Claw windows in the next few weeks.

Becky is just about set with her Ribboned Border Fleur De Lis Window.  With her 6 large background pieces tacked into place she cut the small sections of background by placing the tacked window on top of small pieces of glue chip and tracing inside the ribbon curves.  Once cut, these pieces fit the openings perfectly.  When Becky finished that she moved along to the outer edge using a similar technique to give the window a straight edge for the last 2 borders to align to. 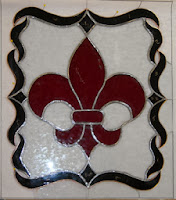 Next we take a look at Jeanne's Beveled Fleur De Lis Window.  With her bevels all tacked together and her inside glass picked out she'll make some HUGE headway into this window when she returns.  What you see below is basically what the finished window will look like (although the actual window will just have some texture to it).  And already the word 'elegant' is leaping into your mind, isn't it?

Wow, Shelley has come so far.  She traced out this FDL pattern onto poster board, cut that poster board pattern up, picked out her glass and traced everything onto it, got all of that cut out and then managed to get more than half of her window ground before the class was over!  I remember when that would have taken her four weeks!  Shelley has certainly got the glass cutting process under control now. and look how wonderfully she has this fitting together. 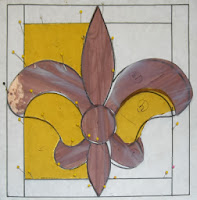 It's not Atlanta!  Don't even think it!  That A stands for Alabama!  Is that any better though?  :-)  I'd best put some more space between these two windows before they begin fighting and break each other into little tiny pieces.  But seriously, Betty's doing a wonderful job on these and her Tiger Claw LSU window will most certainly be completed when she returns.

And that brings our Blog back up to date.  The only problem (for me) is that in less than 1 hour my Tuesday night class begins which means that in 4 hours I'll have more pictures to start working on for the next installment of our ongoing classes.