Are You On Vacation?

We had our first Weekend Workshop on the 1st and 2nd of the month and this update will deal with what happened in the shop during those two days.  They were certainly long (but fun) days, each lasting from 9am until 6pm.  We did take a lunch break to eat and clear our minds and there were snack breaks throughout but on the first weekend of February, WE ACHIEVED!!!

We had four students: Jeannette, Rowena, Becky (who had done one Weekend Workshop with us last year), and Martha (who is a regular weekly student) who showed up to provide moral support for Becky.

When everyone arrived we took about an hour and a half to learn how to cut glass.  The term 'cutting glass' is actually very misleading however.  What we actually do is score the glass, making a weak section that a break will (hopefully) follow.  It requires the perfect amount of pressure on your cutter and the ladies all took to it easily.  Once everyone made their straight cuts, their curved cuts and compound curves we moved onto a circle and then ended with inside curves.  (Point To Point!) We then cleaned up the tables, pulled out our patterns and began tracing the pattern pieces onto the selected glass.  Everyone had decided to make the same Stylized Fleur De Lis design that's been so popular in class lately, so having everyone working on the same project helped keep everyone at about the same pace.  That was a big plus, but sorting through all of the photos and trying to figure out what window was whose was NOT easy especially since I was bouncing around here and there while taking them.

We're all sorted now though so let's take things one student at a time, in no apparent order, starting with Rowena (who was very new to the process of making stained glass).  The first thing she did was cut out her clear background glass.  Those pieces consisted of nice simple curves that weren't hard to cut-- and since confidence is gained through success this seemed the way to go to me.  By 2:30 everyone had all their windows all cut out (save for the border pieces which we put on AFTER the window is tacked together).  Here's  a look at Rowena's window with all of her glass cut. 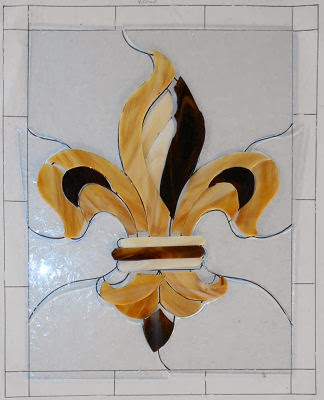 Next came the grinding process.  She had  to make sure that all of her glass lines up with the other pieces perfectly and that they all have a rough edge so that the copper foil can stick to it. This next picture is Rowena's window with everything fitting perfectly.  This was also the stopping point for the first day. 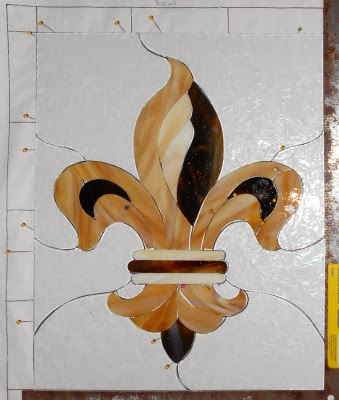 When Rowena returned on Sunday morning she began wrapping her pieces.  Wrapping can be tricky but Rowena caught on quickly and definitely has a natural ability to roll the foil out evenly onto the glass.  Once she was done with that she tacked everything together and we added the final border.  Then she began solder. 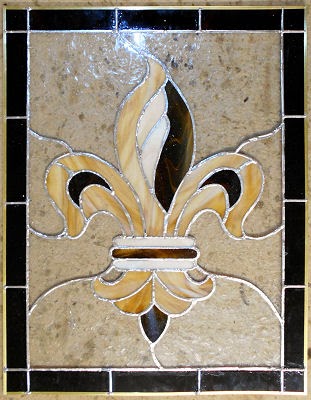 Once the soldering was completed we gave the window a few baths in water, chemicals and then water again to clean it all of.  And this is Rowena's completed Fleur De Lis!  I'm going to say that that she did an excellent job on her first window and I know for a fact that she loved it when she saw it hanging in the sunlight. 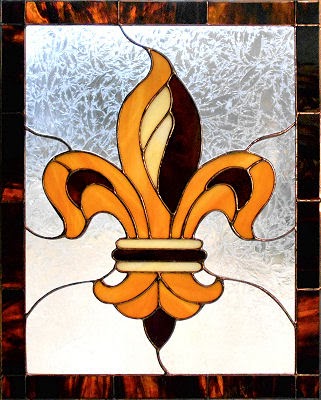 Next up we look at Becky's window.  The steps are identical to the steps Rowena took so I won't waste everyone's time repeating myself four times but I will mention anything interesting that happened along the way.  Becky has cut glass before so she had a bit of an edge when it came to cutting.  That said, this is what Becky's window looked like before it spent some time at the grinder.  You can see that she decided to change the colors up a bit by adding some red accent pieces which made identifying her window's pictures a lot easier for me. 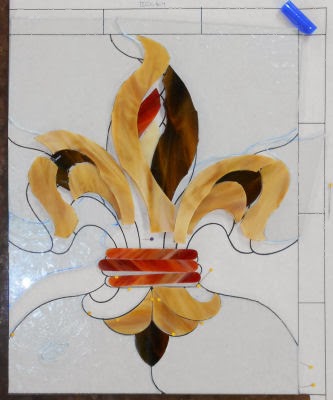 And after spending about 3 hours at the grinder Becky had everything fitted and ready for copper foil. Becky was ready to call it a day at this point.  Everyone left to get something to eat (Becky might have even had some wine-- she was with Martha so it's not out of the realm of possibility...) and then it was off to bed to be well rested for Sunday. 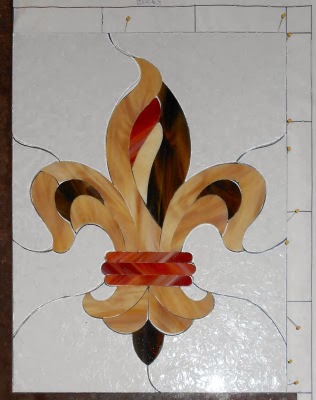 It's day two now and Becky's window has been foiled, bordered, and brass channel is now surrounding the window.  Becky can now begin the solder process.  The thing about soldering is that you have to take your time.  Moving quickly only makes you waste time when it comes to making your window to look good. That's Becky's hand holding the soldering iron that melts lead onto the foil surrounding all of her pieces. 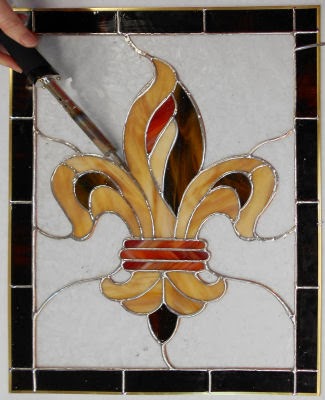 And now we're at the end of the day and this is Becky's finished window.  I like how she angled the grain on the red glass so it wouldn't all line up perfectly and just look like one piece of glass split into three sections.  On the top and bottom pieces of the banding her grain runs like this: / , while the middle band runs the opposite direction like this: \.  It's a subtle, yet effective, touch that sets off her red accent nicely. 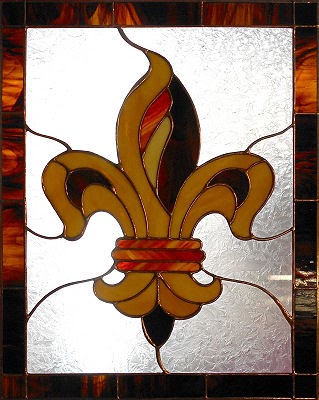 Up next we have Jeannette!  She also used a bit of red in her design but she only used it in 3 pieces.  And since the red is different from the red that Becky used you really can't tell what the difference is while the glass is on the table. 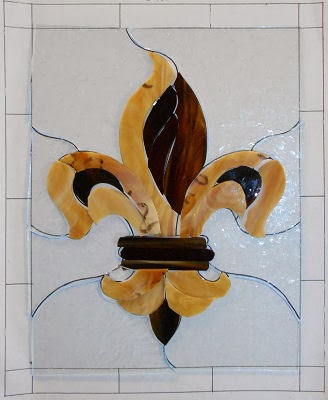 Jeannette did a great job cutting her glass and then headed over to a grinder with her window. Grinding is something that I love doing and actually look forward to when I make a window.  Jeannette made short work of the process and made it look easy.   I was very impressed with her work at the grinder because she never asked any questions and just took to it instantly knowing just what needed to be ground to get things to fit.  Here's a look at the wonderful job Jeannette did grinding her glass 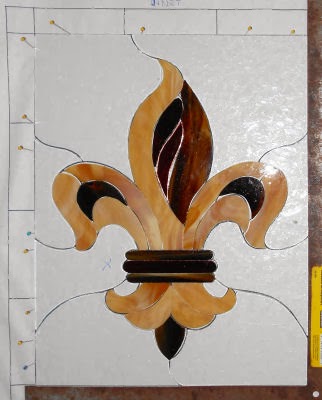 And here's Jeannette's window all tacked together and about to get some brass channel added to the edges at noon on Sunday.  You can see the unattached channel to the right and left of the window.  You may have to enlarge the picture to really see it (just click on it), but it's there. 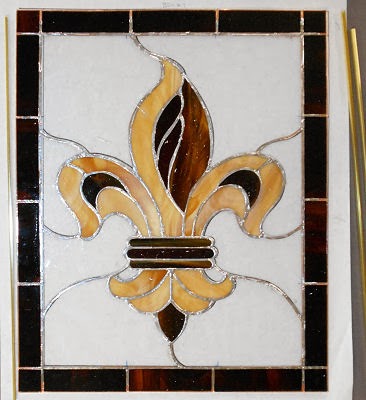 And now with some (fading) sunlight behind Jeannette's Fleur De Lis you can easily see where the three red accent pieces are.  Jeannette used red glass in the center of the three piece banding section of her Fleur De Lis while Becky used three red pieces and altered the grain to set hers off  Neither way os right or wrong and both look beautiful.  I really like the added red accents that Jeannette used and think that she's got a natural talent when it comes to making stained glass. 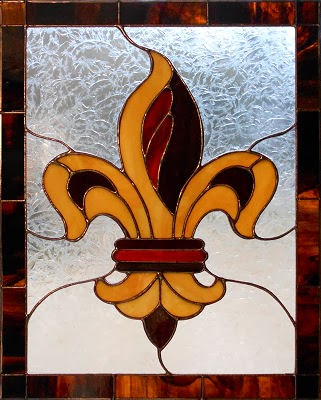 And last of all, but certainly not least, we have Martha's window.  I remember when she first saw the Stylized Fleur De Lis pattern-- she wanted to make it immediately but decided that it would be the window she would do during the Weekend Workshop.  The only problem was that the workshop was months away and she wanted it now!  But here we are looking at her pieces all cut (and some of them already having been ground).  All it took was a little patience. 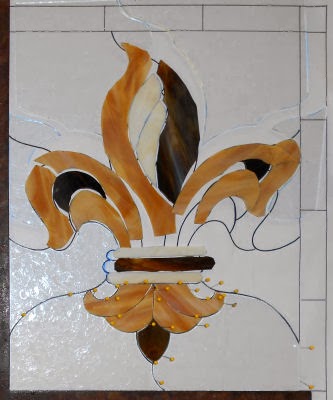 Martha got everything ground and fitted together with relative ease because Martha knows her way around a grinder.  There wasn't much of anything for me to touch up on anyone's grinding but I will state for the record that Martha could teach a class on grinding.  She worries about her speed but Stained Glass shouldn't be rushed. 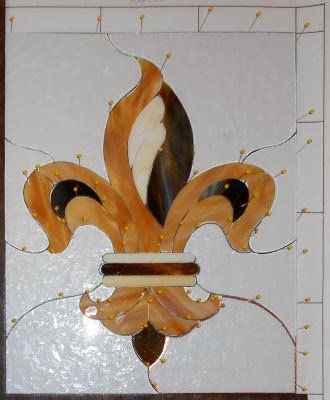 Next we take a look at her window all ready for it's final solder bead.  It was about 3:00 by the time she got this far which left her with three hours to solder the window.  And that's plenty of time.  One thing that I've learned about Martha in this Workshop is that she doubts herself too much.  She knows what to do and how to do it, but then becomes her own worse enemy by second guessing herself.  In the end she gets it done and this widow that she made all by herself proves that she knows what she's doing.  I barely had to touch it with the soldering iron when she was through because her lead lines looked THAT good! 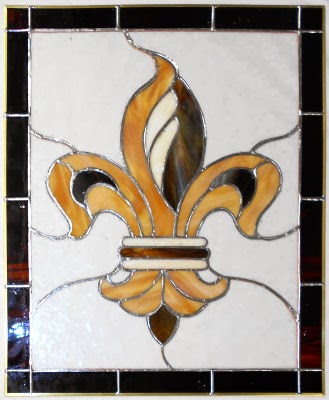 See what I mean?  Here's Martha's window all washed up and sparkling with a fluorescent light behind it (The sun was too low for sunlight by this point).  I dare anyone to say that it isn't beautiful.  My final words to Martha are to simply trust yourself.  You know what you're doing! 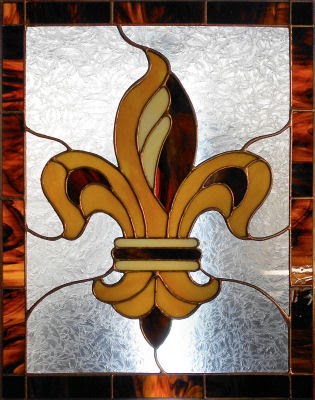 So, were Saturday and Sunday long work days?  I'd say definitely so since they ran 9 hours each day.  But the thing is, everyone was having so much fun getting to know one another and laughing and joking around that he hours didn't feel long at all.  Before anyone knew it, it was the end of the day and time to go.  There's one thing that I know for sure though, and that's the fact that EVERYONE had a great time.  Jeannette and Rowena are already aboard to come back again in a few months with a friend of theirs and some new windows.  And Becky is hoping to get into our regular classes  (once someone drops out!).  It will happen-- It's just a matter of time.

Everyone did wonderful work and the four windows you saw above are a testament to that.  Making stained glass is very time consuming task but it can also be a lot of fun.  And this past weekend was enjoyable for both Russ and I as well as out students because of the company we had in the shop.  And that's the best thing anyone can hope for in a weekend workshop.

In the end I want to thank Jeannette, Rowena, Becky and Martha for the fun weekend that didn't feel like work at all!