This week we're going to start by talking about the positioning of your pattern pieces on a piece of glass.  Most people place their pieces in one of the corners (see the picture below) which leaves you with an irregular shaped piece of glass left to store. 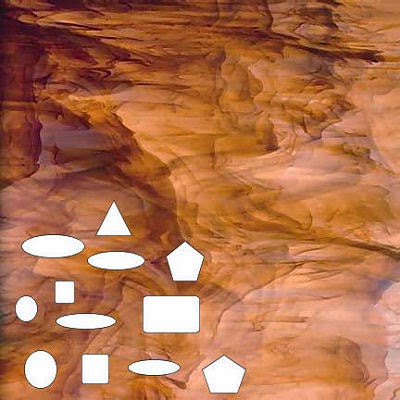 What you should try to do is line up your pieces across the entire edge of the glass and line up any straight pieces you can with the straight edge of the glass.   A simple straight cut leave us with a more usable piece of glass for future projects and allows us a small piece of overage to cover any breakage that may occur when cutting out your pieces.  I know that grain and color are an important part of deciding pattern placement but if you lay out the important pieces first you can fill in with the rest of your pieces accordingly to make a clean break from the remained of the sheet of glass. 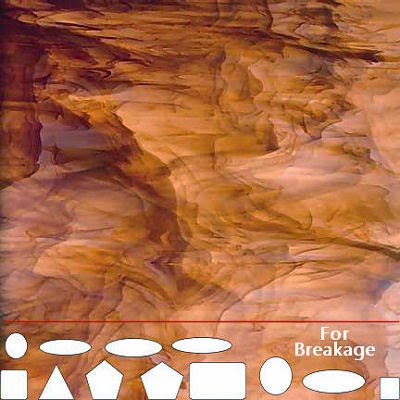 Okay, so I've been dying to reveal this next window because Betty's Iris and Water Lilies Window is amazing. Consisting of almost 300 pieces in a window that measures about 22 x 16, you know that Betty had her work cut out for her.  Just look at all of those leaves and stems!  But the end result was certainly worth it and I feel that it's safe to say that this is Betty's tour de force. She also managed to pull off the perfect border combination (using a different but similar purple glass) which makes the window look even better than the original pattern could have ever hoped to acheive. 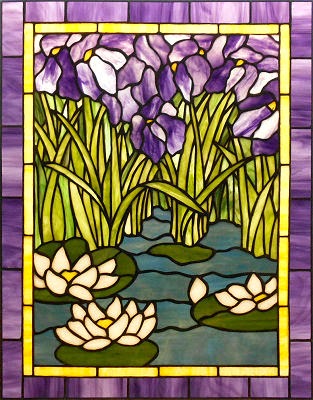 And then we have Lynn's Black Swan Ballerina Window which is another showstopper.  Based on a drawing of her own design Lynn went all the way with this project.  Her clear baroque background glass was cut from one fitted piece making the texture lines match all throughout the background.  She also made use of bevels in her outer border which, I think, looks better than a border made entirely out of bevels.  All bevel borders work best on all clear windows.  Lynn did a fantastic job on this window-- she should be very proud of it. 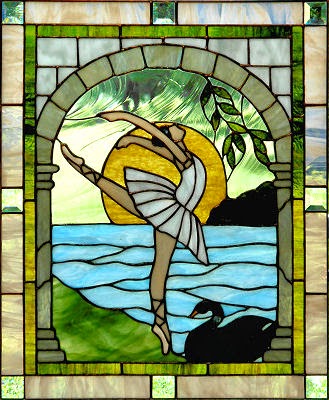 And Shelley completed her LSU Window this week.  She says that she's staying away from patterns with straight lines but I think everything worked out just fine on this project.  From the colors to the textures to the workmanship, Shelley has proven that you can't keep her down!  Next up for Shelley are more Mermaids.

Becky S has her 'C' Window all ground and has taken it home to foil during the week.  She even plans on soldering the front side at home if she can find the time.  She has a definite plan for the final border involving a very interesting clear textured glass and 4 bevels that we'll most likely reveal next week. 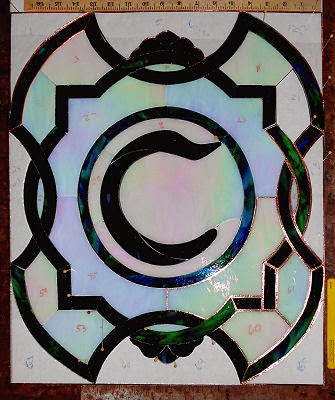 And Brenda worked on the name portion of her Dog window and as you can see from the picture the dog's name is Baby.  (Although you might have guessed that from the previous posts about this project.)  She's only 12 pieces and a border away from completing her window so I think we'll see it finished soon.

Carol has finished cutting all of the glass for her Tabasco Window and even began grinding it this week.  She only has a few pieces left to go and then she'll be wrapping each of those pieces with copper foil.  We hope to have the Tabasco logo drawn onto her glass when she comes back in which will be fairly easy.  This window is looking great already and Carol is becoming more and more confident with each piece she cuts and grinds. 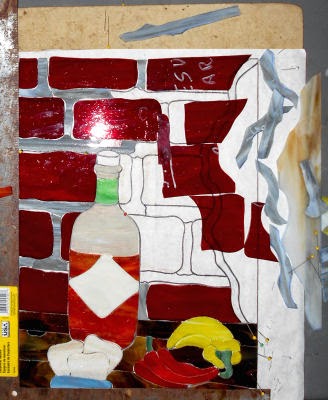 Cindy got her Magnolia Lamp all tacked this week and it fit together about as perfectly as one could ever hope.  She put this together in three sections and then soldered them together to make one globe.  I think we ended up adjusting less than 10 pieces of glass to get it all together and on a sectional lamp with fill-ins, that's not bad at all.  In fact it's GREAT!  She'll add the cap next week and then begin soldering. 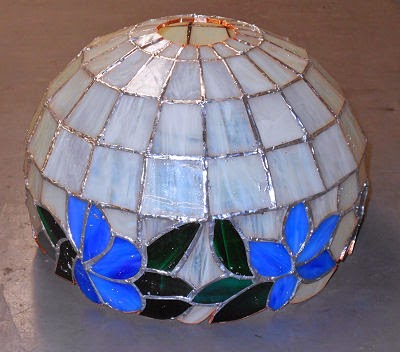 Janet had her pattern with her this week :-) and was able to really get her Rooster ground perfectly.  She just has a few tail feathers left to go and then there will only be the background and border left for her to cut out.  The border on this is unique in that it it not a straight border connecting to the background glass.  It's actually made of randomly positioned semi-squares which will give this a very distinctive look.  As you might have noticed, Janet is also worked on a small multicolored cross which will be the first of three that she plans on completing while her Rooster is under construction.

And speaking of the Smaller Cross design you can see two of Ann's variations on the pattern below.  Both crosses are made of solid iridised colors, one in purple (which looks incredible in the light) and the other in black.  The iridised black cross is possibly the more striking of the two because of the way Ann positioned her pattern pieces on the glass.  Black iridized glass really highlights the mother-of-pearl effect of the glass and Ann has managed to make one sheet of glass look like many different colors by utilizing certain spots of her glass as you can see in the cross on the left.

Next up we have Jeannette's Grape Window and she is really advancing quickly on it.  With her first cluster all tacked together she's got the second one all cut out and partially ground.  We've placed all of the pieces on the side of the pattern and have them laid out in numerical order to make grinding the cluster easier without having all of those extra grapes to work around and worry about mixing up. Organization is the key to working on projects with many similar pieces.

Myrt's Dove and Cross Window is almost 100 percent ground now.  With 2 of the sections wrapped I'd say that this design wasn't hard for her to do at all.  In fact, I'll have to see what she wants to do next because this will be completed before you know it!  I was really impressed with her grinding because she left plenty of room for the foil without there being gaps between the pieces afterwards. 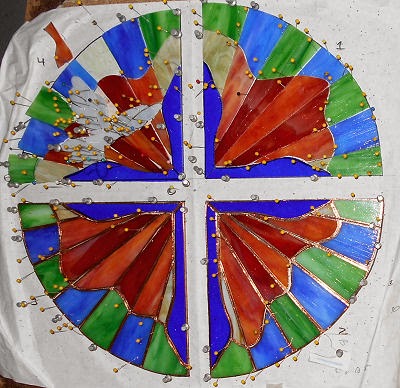 Betty's Three Wise men Window is moving along quickly.  With just a seven boards, three pieces of sky, and the border to go I think that she'll have this one finished before you can say gold, frankincense and myrrh!  Betty says that this is a one time only window, but since Betty is a woman who likes to works in pairs, I think I'll wait a few weeks (or even months) before accepting the fact that this is truly a one time deal. Something tells me that when she sees this completed she's really going to like it. 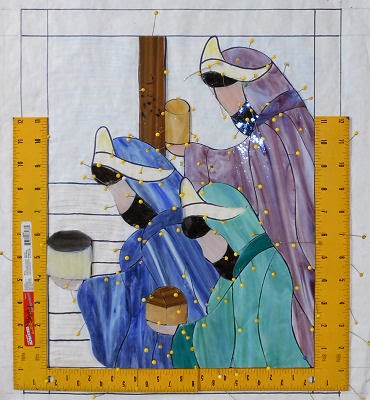 Susan's Abita window is almost completely filled in now.  There are only a few white spaces poking through which means that those bottle spaced white openings will need to be filled with bottles soon.  The nice thing about windows with small pieces like this is that they are generally a breeze to solder.  I really believe that this window is going to be everything Susan hoped it would be.

And next we take a look at another logo design.  Linda F's Coke Window is already looking like a winner even though the only glass she has cut out so far is the red background.  But the lettering itself will be cut from white glass so the picture gives you a pretty good idea of what this will look like when it's completed.  I can already tell that this is going to be a fun one for Linda.  There are five or six pieces that are going to have to be ground out rather than cut, but that's what happens when you reproduce a logo that wasn't designed to be done in glass.  That said, I have no doubt at all that Linda will do wonderfully on this.

Jeanne has begun cutting her cross out and has opted to do her grinding as she cuts.  Sometimes this can be a valuable way to do things, especially if your border will be cut from one piece of glass.  And in this case, with all of those straight lines, we want the background to be as straight as possible which means assembling the cross portion so it can't shift easily before she cuts her background. 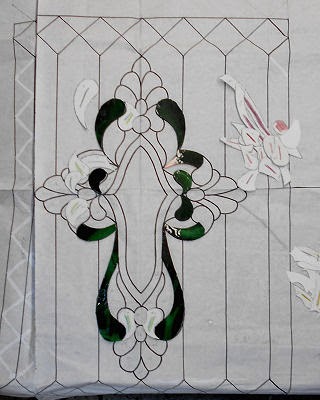 Mary Grace is moving right along with her Iris window.  In fact, the background is the last part to cut out and it's almost ready to be traced out.  There's a missing piece of ribbon border in the picture but it's only missing because Mary Grace had it at the grinder when I took this picture.  She agonized a bit over the color of the four accent pieces but in the end I think she couldn't have picked a better color then the one she picked.

Terry's latest Geometrical window show me that she has mastered the art of making a symmetrical pattern.  She knew what she wanted to do but was afraid that two of  the cuts would be too difficult so she drew out an alternate plan on top of the pattern and then asked my advice.  I saw that her original idea had some complex cuts in it, but nothing impossible so that's what she went with.  You may not realize it  but there are only a few pieces left to go in this window because her white background is already cut and laid in place.  I suspect that this will be another quick window for Terry.

I know, you're looking at this wonderful baseball suncatcher and thinking the letters stand for Major League Baseball, but you'll be wrong!  The letters are actually initials and they belong to Paula's Grandson who will most certainly be hanging this in his room next week when I'm sure Paula will complete it. She's done a wonderful job getting this suncatcher together and her attention to detail is something that will only make her work look better and better. 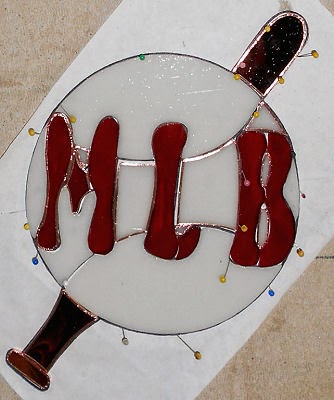 Now this version of the Grape Window that Rowena is doing may look like the same one that Jeannette is making but upon closer inspection you'll discover that there are subtle yet distinct differences.  First off, this version is missing the cluster of grapes on the far left.  And most importantly, it is smaller that the window Jeanette is working on.  Had we included the cluster of leaves we would have had to make the grapes even smaller than they already are and that wouldn't be nice to do to Rowena.  But she's moving along as quickly as Jeannette is so I can't say that the smaller grapes are giving Row much of a problem.  She'll be wrapping all those little round pieces when she comes back in next week and then she'll tack them all together.

Lastly we take a look at the first of Martha's Stylized Fleur De Lis Windows.  The FDL itself is all cut, ground and even foiled so Martha is going to grind the second one that she has already got cut out.  Once she has all of her FDL's ground, wrapped, and tacked together she will start cutting her background pieces out.  Martha is doing a great gob here--- all of her curves flow smoothly and the design is perfectly symmetrical. 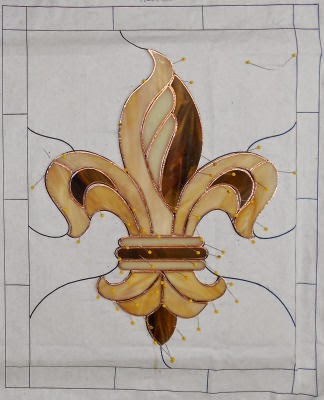 And that's what happened this week during our classes.  We have a new week just about to start and a lot of projects that should be completed so be sure to check out our next update.  You never know what you'll see our students making next!