For A Splash Of Drama


Yes, we are late... VERY late, in fact.  It's been a hectic 2 weeks and things are just starting to calm down.  So let's get down to business here!

Becky S's latest window (which I want to officially name "Lady Kicking Back") turned out to be incredible.  It's such a simple design but the colors are what make it.  Those ruby red high heels are what catch your attention most but the color of the glass used for the legs is sheer perfection.  To see this in person, well, it's just one of those windows that a picture can't do justice to.  And check out those fancy hangers on top! 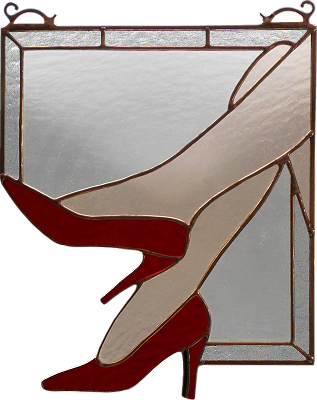 Betty completed her squared Magnolia Window and it it's also a show stopper.   Measuring close to 24 inches in both height and width, this is one large window.  It's a beautiful design and Betty is already working on a second more rounder version. 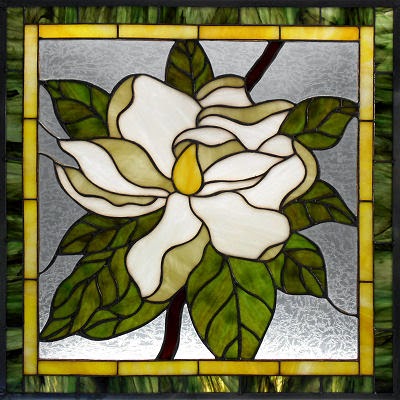 Brenda's CC Window is also officially completed and she is really on a production frenzy here!  I think she's been making a window a week (sometimes even two a week!)  She's done this pattern once before but she managed to knock this one out much quicker than she did her first one.  Trust me when I say that Brenda is a force to be reckoned with! 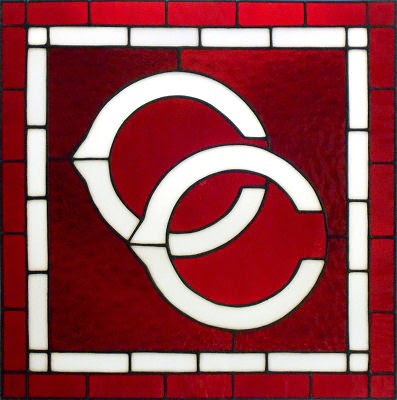 Linda L's two Breast Cancer Ribbon Boxes have been finished and the mirrored bottoms just make the clear granite glass sparkle all the more.  I've always been a fan of using mirrors for box bottoms if there's any clear glass involved because it allows light to pass into the box and then light it up as the light is reflected back outward.  You can see the effect perfectly in these two beautiful boxes.

Now this is an Elephant!  Paula reduced the number of pieces in the original design but only by about 12 pieces.   This multi-colored Elephant is 9 inches wide and consists of a whopping 64 pieces! I really want to call attention to something that really makes this suncatcher an amazing achievement for Paula: the outside edge.  Every one of the pieces line up perfectly with it's neighboring pieces making a smooth edge without having pieces poking out here and there.  Paula has come so far so very fast.  Just look at those tiny toenails that fit PERFECTLY into the feet. 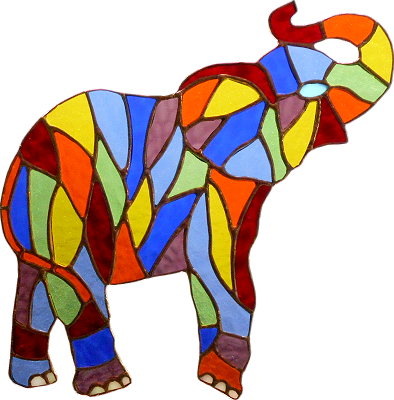 Terry's latest round of Initial Windows are brought to you by the letter's R and D.  (Research and Development?)  These windows are two completely different looks that are both stylishly designed and perfectly executed.  I expect nothing less of Terry's work. 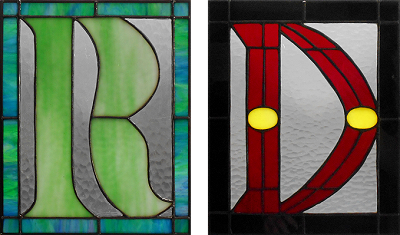 And Carol made this Horse Suncatcher in between classes while she was home during the week.  I've touched up none of the soldering (because it needed no touching up) and I have to say that Carol certainly seems to have this whole stained glass thing down pat now. 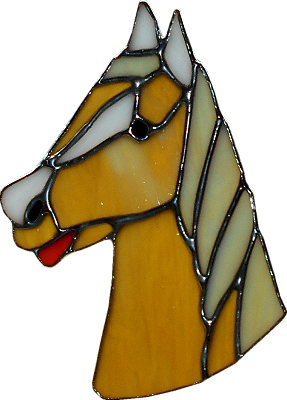 Ann has been working on the 12 small Fleur De Lis corner pieces for her next three Initial Windows.  It's hard to decide what's harder to make, the initials or the tiny FDL's that go into each of the corners of the window.  At any rate, Ann seems to be able to breeze right through it all as evident in the picture below. 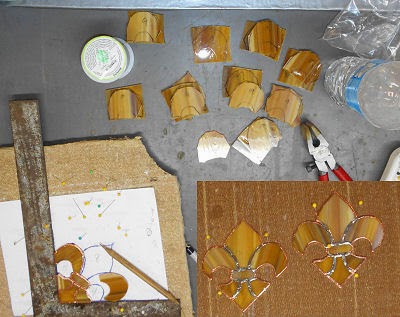 Next up we take a look at Betty's second Magnolia window as well as the Open Cross design that's proving to be so popular in class.  The Cross itself is finished save for a good cleaning, and the magnolia is about halfway complete now.  She's been agonizing over the color of the leaves but no matter what Betty decides you know that this will turn out wonderfully. 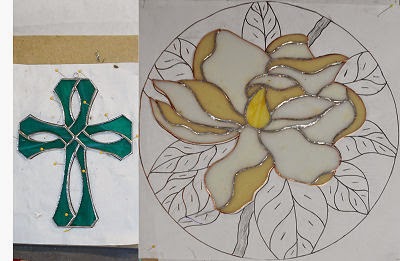 Remember those popular crosses I was just talking about?  Well here are two more that Bonnie cut out and ground while she was in class this week.  It's hard to see the texture of the glass in the green one but it is beautiful.  Hopefully you'll get to see it better when we light this up in our next update. 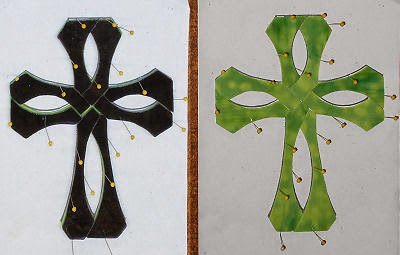 Brenda came in with the majority of this LSU Football Window cut and ground.  Once her CC Window was completed she picked up work on the top name portion of this project.  I think Cam is going to love this! 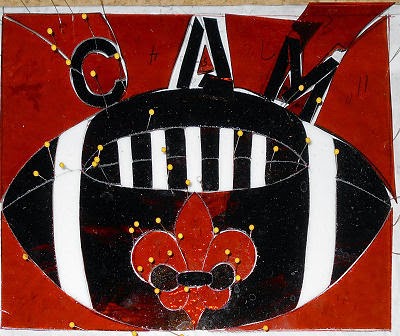 Carol continued working on her Tres De Lis Window and now that the borders are attached you can really get a feel for what the finished piece will look like.  Carol toyed with the idea of using a single border with alternating colors but the idea of a double border worked really well with the size of the window and this is what everyone decided looked best.  One of the nice things about working in class is that a popular opinion is easy to come by! 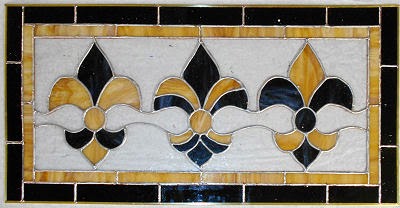 Then there's Cindy's panel lamp which is moving right along.  I'm not sure what panel she's on right now but you can see that she's got this particular one fitting together perfectly.    She has a grand total of 6 sections to make and I think that this is either section 2 or 3.  That means that before you know it she'll be ready to tack these together and call it a lamp! 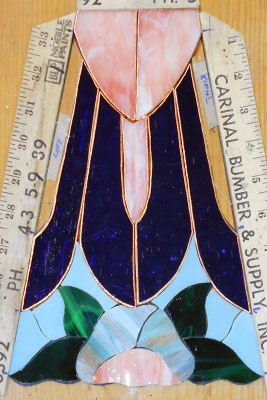 Janet's Tree Of Life Window is getting closer and closer to completion.  There are under 20 pieces left to cut and I have no doubt that they will be finished during her next class.  This week she wrapped the leaves and the tree and then tacked them all together.  Still having a little extra time at the end of the night we decided that she'd be able to get the inner border cut as well.  And we were right!  I have no clue what she's going to use for her background glass but I'm thinking some sort of textured clear would be perfect. 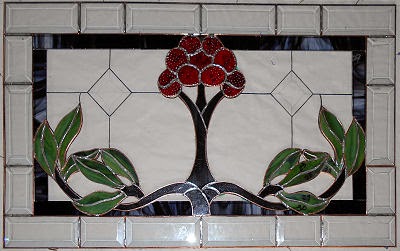 Jeanne's Stylized Cross is spectacular in a way that's easily seen now that her background glass has been cut and wrapped.  This window is almost ready for solder.  All Jeanne needs to do is to work on 'fill in's along the top and bottom and then add the border.  I love this window and all of the colors she's picked out for it. 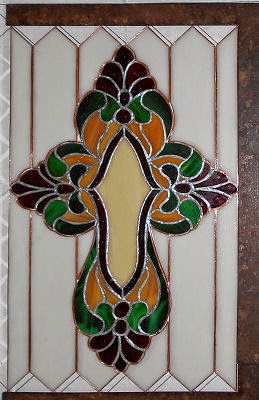 Jeannette has her water cut and ground for her Shrimp Boat Window.  If you look at the picture you can see that she also managed to get it all tacked together as well!  There's just the sky and some clouds left to go and since the rigging is made by cutting the sky I'm thinking that the majority of this will be completed when Jeannette returns. 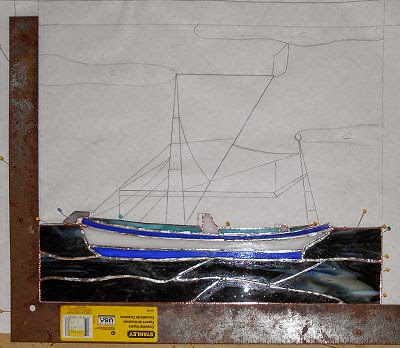 Linda F began working on her version of our Standard Angel pattern.  This version has two extra cuts because the glass she is using for the dress had very staright lines throughout the piece and the 'flow' of the skirt couldn't be captured near the bottom.  But by adding 2 simple cuts Linda fixed the problem and now has an Angel Dress  that flows beautifully. 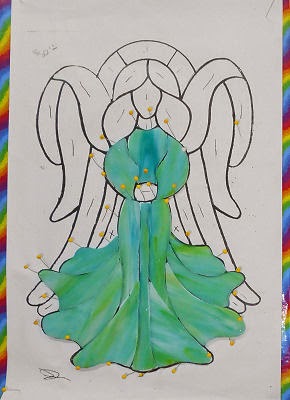 Lynn's Initial G Window is really going to be spectacular.  Other students have been eying up the pattern while it was hanging up on the wall and someone already asked me if the G could be replaced with another letter.  I love the work that Lynn got done on this and can't wait to see what colors she uses in the rest of it. 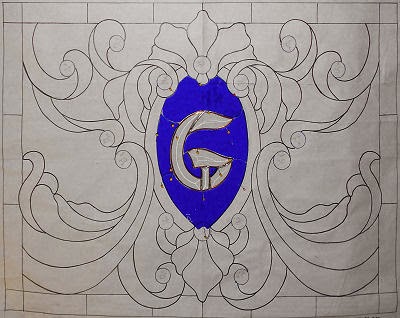 Martha has the center section of her beveled window repair all cut out, ground and tacked together.  That means that she's only got the border left to go and then some solder.  I think Martha now understands why repair work is so costly-- it's easier to start from scratch rather than trying to refit pieces and fill in broken sections. 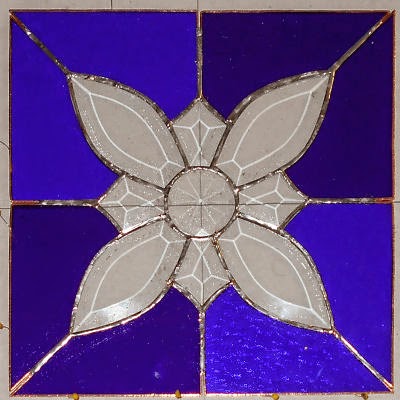 Mary Grace got all of her borders tacked and then began soldering the front side of her Bird Of Paradise Window once her brass channel was attached.  Mary Grace has taken her time with this window and the payoff is that everything fits nicely, the foiling is uniform, and (most importantly) her soldering requires little to no touch ups!  Look to see this flower completed when she returns. 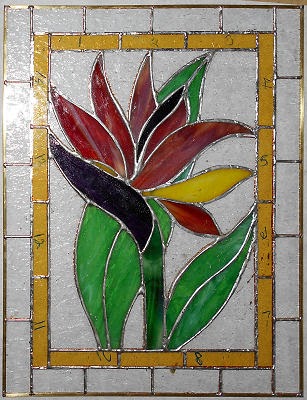 Myrt now has all of the glass cut for her Octagon Sunflower Window.  After getting the border cut and ground she wrapped her pieces and attached them all.  She's got the lion's share of this window completed so I know we'll see this as a finished piece when we see Myrt again. And wow, is Rowena's Deer Window looking great!  The final green border was a perfect pick since it matches the green leaves perfectly.  Had Rowena used a single border she wouldn't have been able to use that green since it would butt up against the leaves.  The smaller inner border really sets off this window and Rowena's work is amazing. 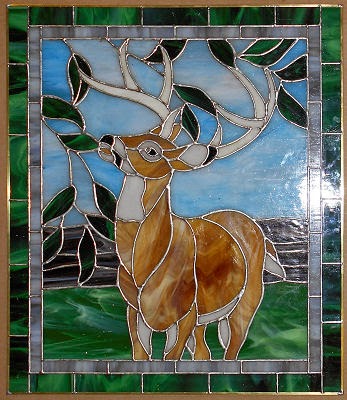 I already have pictures to sort through for our next update since we're two classes into the week already.  I hate falling behind and I promise to be back to normal next week.