A very important aspect to stained glass is cutting back on waste.  Lately we've seen a lot of students positioning their windows so they are properly oriented to them, which is not always the most efficient way to work on a window especially if it runs tall.   We also see people orientate their pattern and the poster board identically when tracing the pattern to make a second copy.  Just because a pattern is wider than it is high doesn't mean that you should position the pattern onto the poster board that way (as shown below)

As you can see in this second picture a lot of paper can be saved if we simply place the poster board in a portrait position even though the pattern runs in a landscape aspect.  The remainder of the poster board can easily be used for another large window.  This also holds true when positioning your pattern pieces onto your glass, but that's a topic for another blog post.  :-)   Try different positionings with your pattern and it's pieces on your glass to help save both glass and paper and cut your costs.

So Holy Crow, Mary Grace's newest Bird Of Paradise Window turned out to be absolutely stunning.  I honestly didn't feel one way or the other about the glass she had picked for her outer border, but now that I see it lit up-- WOW!  I love this window and Mary Grace should be exceptionally proud of how carefully (yet quickly) she handled each step of this project.  There's not a fault to be found in it. 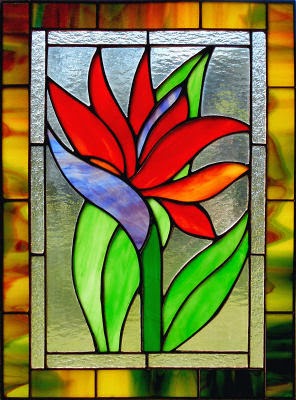 And Carol's Detroit Lions Window is nothing to sneeze at either.  Her craftsmanship is top notch and Carol has proven that she has a firm grasp of all the steps in making stained glass now.  When I drew this pattern for her I put in some challenging cuts that she made her way through very easily.    If her confidence isn't sky high after this window then I don't know what it's going to take to get her to admit that she's now creating above average work. 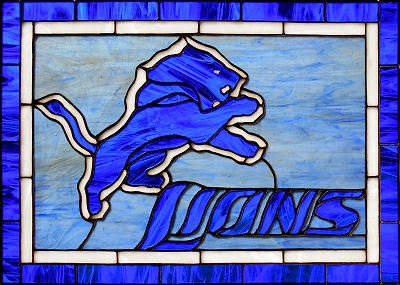 Linda L got four of her eight Heart Mirrors completed this week and I have no doubt that she'll be  completing the remaining four when she comes back in.  These are going to make nice gifts especially since they were made with a broken mirror that her mother once owned.  Linda turned a misfortune into highly sentimental pieces with this project.  Who said broken mirrors are bad luck? 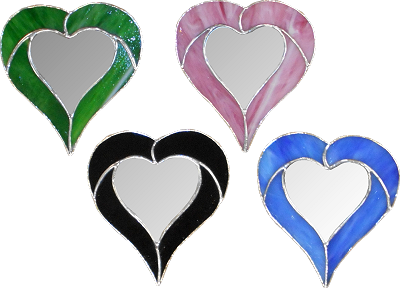 Carol saw Jane's Sunflower Lawn Ornament last week and fell in love with it so much that she decided to make one at home.  I told her to finish the flat section as she would a suncatcher and then bring in the remaining seven smaller petals so I could show her how to attach them.  Within a half hour this was a completed and Carol loved it even more than she did the previous week since she gets to take this one home with her.  Next week she's going to start a Bumble Bee Ornament and it's one of my favorite lawn ornaments. 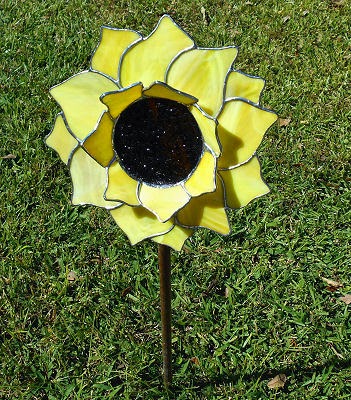 Betty completed her seven crosses this past week and they are a nice looking assortment of colors.  She's now got the art of applying a bead on an outside edge down pat and can even attach the hooks to these herself.   I'll admit that  I'm partial to the two blue ones but I must say that the white cross is particularly stunning. 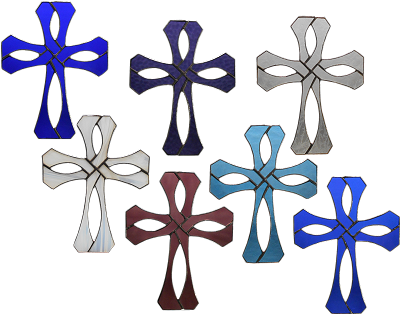 Bonnie's three story tall Sunflower Window is coming together for her in an amazingly easy fashion.  She took her time cutting out the flowers and that resulted in a quick grinding session that took less than a half an hour!  The rest of Bonnie's class was spent wrapping the pieces and next week she'll be cutting her 15 easy pieces of background glass.

Jeanne's Stylized Cross Window has been flipped over and she's now about to begin working on soldering the back side.  It will take most of the night to get the back side soldered correctly so I'm expecting this to be finished not this week but in the following week.  Coloring a window takes time and I'd hate to see this get rushed at the last minute and have the coloring suffer since everything else about this window is perfect.

Betty is finishing up the work on her Magnolia window and is just about ready for the round border to be attached.  Once that's done there's just some soldering to go before Betty gets to call this a completed window. 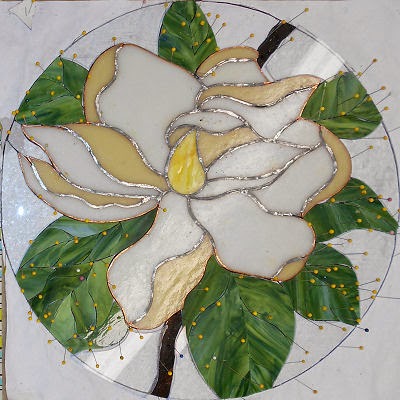 Brenda really went to town working on her Iris Window while she was at home.  She only has the background left to cut and that's about it.  She mentioned that she wasn't happy with the color she picked for the ribbon border but it was the only thing that she had at home at the time.   We talked to Brenda on the phone during the week since she took this back home and she said that she'd re-cut the ribbon out of a different color glass.  I have to say that I'm proud of her for making such a drastic change.  It isn't easy replacing something that you've already cut and ground, but if you don't like every aspect of your window it will never look good to you when it's completed. Way to go Brenda for going that extra mile.

Janet decided to put the Santa Face that she's been working on into a background glass and turn it into a window rather than a suncatcher.  Like Brenda, Janet was unhappy with a certain part of her window and she took it apart and redid a section of it while she was at home.  Now his eyes are evenly balanced and he's looking great.  She was going to go with a light green background but everyone agreed that this champagne color worked best.  To give it a completely Christmas feeling Janet will be using both a red and green border to frame this. Cindy is hard at work cutting and grinding not one but TWO of these Corner Accent pieces.  There are about a gazillion pieces in each of these little 10 x 10 x 14 inch triangular panels which would drive me crazy, but Cindy loves working with small pieces. Mark my words, these are going to be impressive little windows.

Look at those long nails!  I detect a hint of purple and green underneath those red nails but I have no clue what Martha is doing or what she's accomplishing.  She's a bit paranoid about being 'spied' upon during her creation process so she's being very secretive.  Rest assured that whatever this turns out to be, it will be beautiful. Becky S is ready for the rest of her background glass but because this square window hangs at a 45 degree angle all remaining pieces need to match the same angle which requires a large amount of glass to start with.  This is especially true when you need to cut long pieces like the four that Becky needs to finish this off.  Sadly, we didn't have a piece of waterglass large enough to cut from so Becky will be moving on to something else next week until her glass arrives.  She's still managed to get the front side of her window soldered and I must say that all those thin pieces are looking mighty impressive. 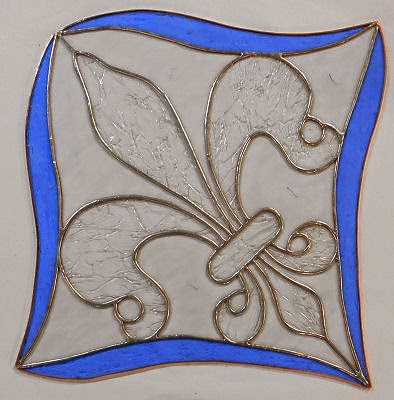 And Ann is ready for soldering.  All her glass is cut, the borders are attached and Ann is about to take it easy and relax while she solders these.  Seriously though, there are a lot of tiny Fleur De Lis' in these three windows and I'm impressed that Ann went the full nine yards  and didn't decide to omit the FDL's to make these easier to make.  Way to go, Ann! 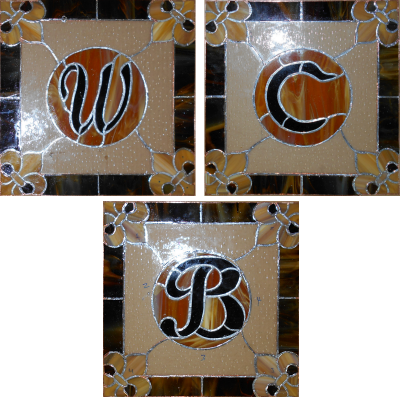 Terry's Chitimacha Logo Window is really coming together.  The amazing thing is that she didn't have anything cut when she came in- just a pattern.  But now the center tree section (the hardest part) is completely cut out and almost ground, and that was in just one night! The rest of this window is going to be a piece of cake for Terry (and I suspect it already has been) 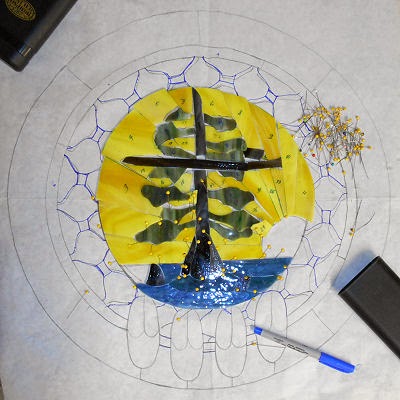 Paula's Louisiana Fleur De Lis Window is an exercise is tediousness.  Even her yellow state of Louisiana has more detail than I've ever seen it rendered in before (Well, in a piece of stained glass.)  I know it's hard to see but even her clear background glass is cut and fitted together which means that Paula should be adding borders when she comes back in.  And I must say that the perfect symmetry in her three border FDL is amazing. 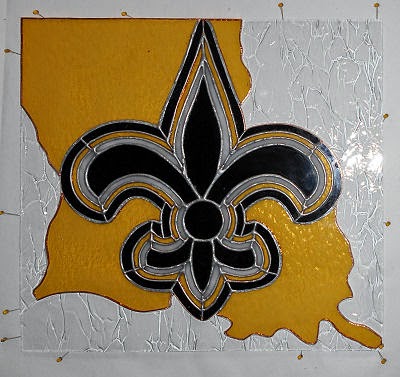 Jane's Geometric design window has a completely different look from the version that I did about 10 years ago.  It's amazing how color choices can change the feel of a window.  She has really made this one speak for herself and I must say that I really like this look.  At first I felt that it needed bevels because that was what I used, but now i see that it looks beautiful without them. I love the flowing inner border on this design. 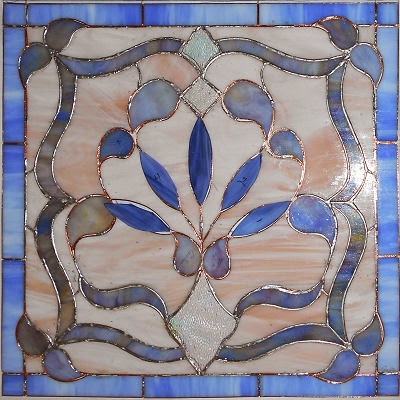 Rowena came in and got to work by grinding the top tiger portion of her LSU Window.  By the time class was over she was all ready to wrap her pieces.   She's a bit undecided about the color for the eyes because we've done this before with yellow eyes and again with red.  But I found some iridized orange globs that I think are the perfect mix of red and yellow that I'm going to show to Rowena when she comes back in.  (FYI-  those are red eyes in the picture)

Susan's M Window is ready for its background.  I'm still not entirely sure if she's going to cut it into 2 or 4 pieces (neither way will be any easier).  It all depends on whether she wants a horizontal lead line cutting across the middle of the window (which is what most people do in a design like this).  I personally think she should go with just two pieces and if she doesn't like how it looks she can always cut them in half and have four.

Jeannette began cutting out the boat for her latest Shrimp Boat window and the majority of the work is already completed.  We didn't have a good picture of the boat to get the detailed cuts that will form all the rigging on the top section of the boat but I'm sure Jeannette will have that rectified when she comes back in.  And then she'll be cutting out the sky. 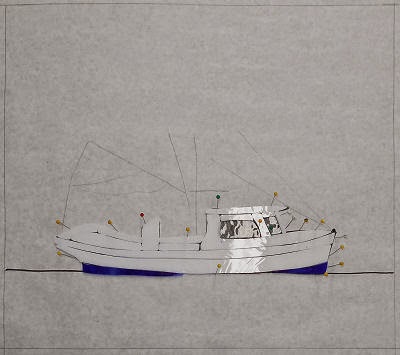 Next week we'll take a look at how Jeannette cut out the last boat that she made.  We were going to cover that this week but we had another Weekend Workshop which has cut deeply into my time.  So expect an extra Blog post sometime during the weekend when we cover what Angie, Roxane, Natalie and Megan accomplished over the weekend with us!