I Need A Diaper

Our tip this week is short and simple but oh so VERY important.  Don't wash the flux off of your project until you are ready (there and then) to patina it.  Removing the flux allows the lead to begin tarnishing and that means that it won't color near as well as freshly washed lead.  Also, touching up the soldering job never works as well once the flux has been removed.  I've found it best leave the flux on your project until you are ready to hang it.   (Now there's always an exception and in this case I'll say that if you have flux on you window but you won't get back to soldering it for a month or longer then you should wash it off.  The flux can stain your glass but it takes a fair amount of time to do that.  My advice is to not flux your window until you know you can take the time to solder it.)

Ok, so Gale's Soldier Tribute Window was completed this week and it's been a popular project to follow these past few weeks.  Gale left it at the shop and everyone has been ooh'ing and ahh'ing over it for obvious reasons. 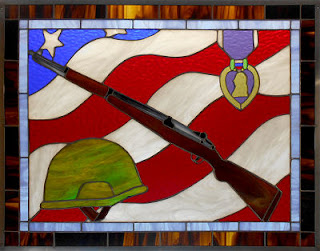 Cindy's Tri De Lis window was also completed and looks completely different now that it's lit up.  I personally love the alternating border colors but wish that the iridised glass that she used showed up better in the picture.  You can't see it but the green and the purple have more going on in them than meets the eye. 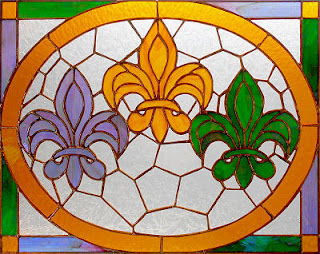 Linda F finished the first of her pair of Rainbow Iris Sun Catchers and a second is on the way.  This really lights up nice and brightly even with just a fluorescent bulb behind it.  Linda did a spectacular job on beading the outside edge of this project which is something that most students have a lot of difficulty with. 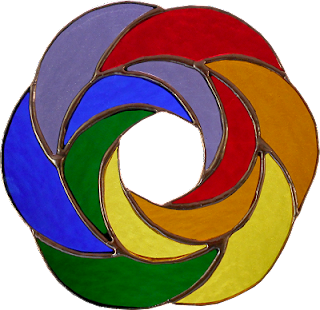 Susan not only started this snowman in class but she finished it in class as well.  She came in knowing that she wanted to leave with this completed and that's exactly what she did. I liked this Goal that she put on herself because I know for a fact that my jobs take exactly as long as I have to complete them-- unless I set up a tighter deadline to adhere to. 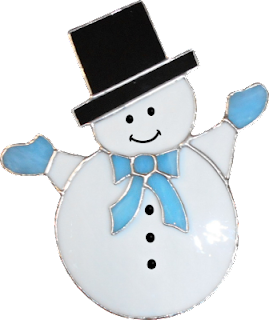 Mary grace completed her American Flag Ornament and she did this all on her own.  I added a stake so she could  put it in the yard but the rest was all of her doing.  It's a grand old flag and Mary Grace should be proud of it. 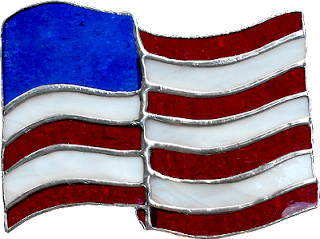 Shelley put the finishing touched on her Bird and Flower Window this week.  You can't even guess where the break occurred that she expertly repaired by incorporating another leaf into the design.  It even fits in perfectly with the composition of the window so no harm no foul! 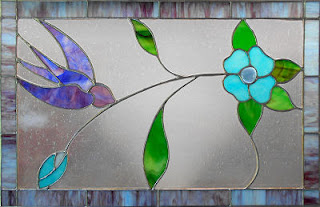 And Janet's second Bee Lawn Ornament is complete.  She assembled it completely on her own getting all the curves just right on the very first time.  She was worried but nowhere near as much as I thought she might be when adding the angle to each piece to give the Bee its curve.  In the end I know that her positive outlook was what made this easy for her.  I just wish she had a better trip home from class than she did. 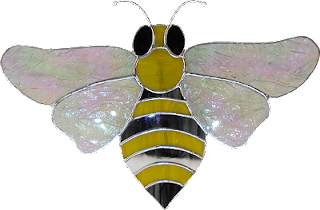 Terry's Daylily Window was nothing last week- not even an idea in her mind, and yet this week it's all cut, ground, wrapped and ready for solder.  I guess that from here on out we'll just have you assume that whatever Terry is working on is her own design because I haven't drawn a pattern for her in ages. She's got that rare gift of being able to draw up her own patterns.

And this week we also learn that Betty's pulling a fast one on us.  She's not making two of these Sunflower Windows, she's making THREE of them.  Trust me when I say that you don't want to know what happened to the border glass for these windows-- I'd almost rather not talk about it because I hate when my 'helping hand' turns into a destroying force.  These things happen to the best of us though. (BTW, by the end of the night her three borders were all cut out and ready to be ground.) 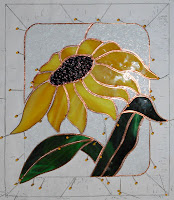 And speaking of borders, Becky is ready for a pair of them on her Bird Of Paradise Window.   She got all of her background cut, ground, and tacked into place this week.  You can see the red glass that she'll be using for her thin inner border along the top edge of the picture.  It still needs to be cut but that won't take long at all. 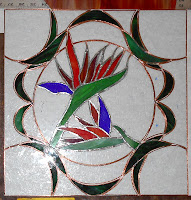 Brenda's rose window is everything I thought it would be and it's not even finished yet!  I love her cathedral color choices for  all of the trim that turns this from an oval into a rectangle window.  Brenda even has a perfect final  border picked out which you can see on the outside of the four metal squares holding her window in shape. 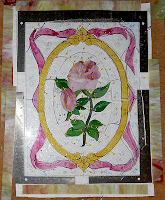 Carol's pink teddy bear window is almost completed.  She changed out the glass for the paws and then got the background cut out.  The bottom tan section has some really deep curves cut it so she cut the curve first and one the glass fits she'll cut the extra glass off of the bottom.  The reason she did it that way was  because all that extra glass on the bottom made the deeps curves less likely to break.  It's something that we may very well examine in greater detail next week. 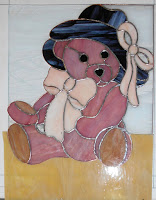 Charlie has the first of his three inserts all tacked together and the front side is even soldered.  That leaves two to go, one this size and a third that will be a tad bit bigger. Charlie showed me some pictures of the Hall Tree that these are going to reside in and it's looking like it's going to be one nice piece of furniture.  Glass and wood always go together nicely especially of you can make them both.

Cindy started a new  hand mirror and she's got this one flowing together perfectly.  There's nothing clunky about this at all because Cindy has her flow down!  These mirrors are all about gracefulness and this is looking like it will be a perfect example of that.

Myrt's  got her sky  in place and there's only one cloud in sight.  It doesn't take a weatherman to tell you that it should be a nice day.  This Outhouse just needs its final two borders and it will be ready for solder. 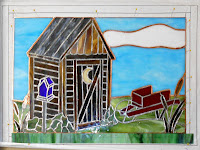 Linda L is halfway through soldering the back side of her Wild Things window which means that she'll be working on her beveled transom windows shortly because the next time that you see this window, it will surely be completed (and turned the correct way)!

Mary Grace is in full swing Lawn Ornament mode.  She started a small bee this week and came up with the idea to use oval Globs for the eyes.  I think it's going to look great and we already have other students considering the idea for when they make theirs. It's always fun when a new idea catches on.

Sue has all of her sunflower lawn ornament ready to be foiled.  All of the smaller pieces that give this pattern the 3D effect are ground and wrapped meaning that this will be staked next week. 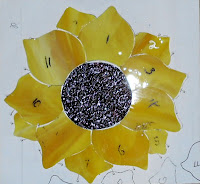 Martha is working on soldering the back sides of both her Magnolia Window and her Cardinal Panel.  I checked out the soldering on the front sides and was VERY impressed with the work Martha's doing.  With the fronts completed I'd say she'll certainly have at least one of these ready next week.

Here's a look at the second Rainbow Geometric Sun Catcher that Linda is making.  With just two pieces left to grind I'd say this she's got this completely under control. 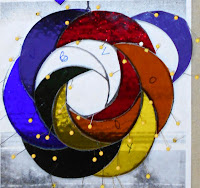 Bonnie came in planning to make a beveled FDL Window but the bevel wasn't in stock and to make matters worse it's not even made anymore.  So  Instead she's going to be making this sweeping Iris window for a two section frame that she has.  Russ did turn up a bevel cluster that extremely similar so we'll see if Bonnie wants to use that instead.