Hello again!  We're going to start things off with this helpful and insightful grinder tip that seems to surprise students at times.  When using a grinder the water in the tray will eventually need to be replaced.  Some of it sprays out while you are grinding and a lot of it leaves the grinder by clinging to the piece of glass you've just ground and removed from the grinder.  With all of this water leaving the grinder you have to remember to keep adding water so it's high enough to make a small twist of water at the bottom edge of the wheel while it is spinning.  It not only keeps the wheel sharp but it also allows the grinding head to cut into your glass quicker and more effectively.  A dry grinder will always slow you down.  And lastly, just because you filled the grinder with water 15 minutes ago doesn't mean that you won't need to add water to it again shortly.


Ok, so we're going to start things off this week by looking at Jeanne's Tiger LSU Window.  Where's the LSU?  Look at the center stripes and you'll see it hidden away in plain view almost like a subliminal message.  Jeanne did a great job on this with a very minimal amount of help. 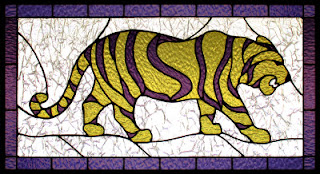 Linda F's Scrap Glass Owl turned out perfect as well.  This large suncatcher helps prove that colors (although important) need not be the focal point of your window.  Who would ever think to use red, white, and purple in an owl's feathers?  Look below and that's what you'll find.   Although the colors are abstract at times, the owl is instantly recognizable.   Great stained glass windows are a combination of good design and a good use of color.  This is both.  It's stained glass and color is something that you might want to run with from time to time.  Be daring! 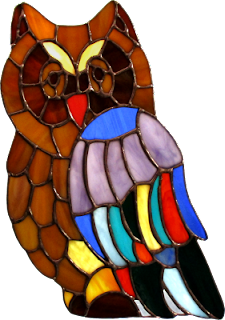 Linda L's last Santa Window is completed leaving her with a new set of three windows to start. She knows what she's doing already and you'll see just what that is when you get a little further down in this post. This window has nice, even lead lines and beautiful soldering which gets Linda two thumbs up from me.  Merry Christmas! 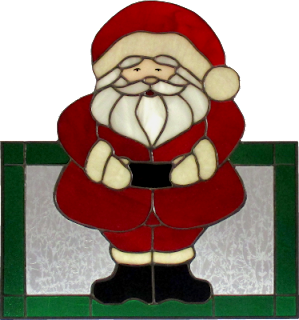 Let's stay on the Christmas theme here and move along to Sue's two mirror image Candy Canes.  One was completed last week and the second completed this week.  Together they sure make a nice pair for decorating.  We've added some wire along the bottom of the Candy Canes to make sure they don't fold in half while being handled because straight lines and stained glass never mix well together.  However, the problem was averted before these were even finished so now Sue is ready to do her decorating with them. 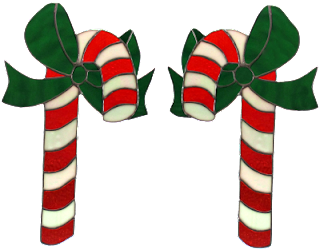 This is the last of the Christmas Decorations that we're featuring this week and this one belongs to Mary Grace.  This is the second in a set of three Tree's that she's making as Lawn Ornaments.  This one looks fantastic and as you'll see down below (if you keep reading) Mary Grace has her third tree all cut out and ready to be ground. 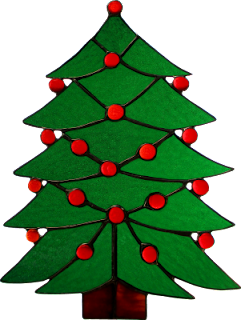 Charlie came in with a hand mirror all cut out and ground save for the mirror itself.  He wrapped all the pieces, tacked them together and the we cut the mirror to fit opening that Charlie left when he tacked it together.  The mirror fit perfectly the first time it was ground and then he wrapped it, tacked it into place and soldered both sides of his mirror before class was finished.  The end result is this completed hand mirror which is spectacular if I may say so myself. 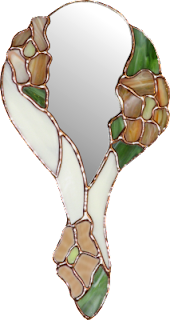 In the last of our completed projects, Janet managed to put together her latest Bee Lawn Ornament and now she's officially a pro at making these.  I think I'll let her teach the other students how to bend the wings and the body the next time someone else decides to do one! 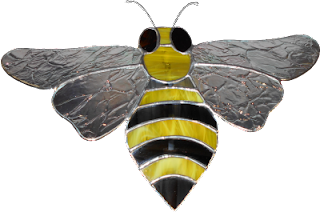 Poor Brenda just can't seem to get away from these Tiger De Lis'.  Every time I turn around she has another one started on her work board.  The good thing is that these pretty much fall together for her now.  But after making five or six of them I'd expect nothing less! 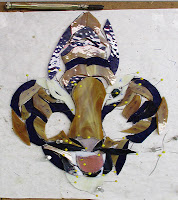 Betty's been busy finishing up her LSU Tiger Claw Window and only has the back side left to solder on that project.  She also has two more Snowmen cut out and now they're both ground as well.  Someone is going to be finishing quite a few projects very shortly and that someone's name starts with the letter 'B'.

And Ann now has all of her Rose Bud Window ground.  She wants to add a double border to this and once it's wrapped and tacked together the borders will go on quickly.  The color that Ann picked for the bud really gives this window a completely different look from it's 'predecessors'.  I won't be surprised to see borders get attached to this when we see it next. 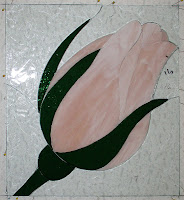 Becky S has been bust cutting away at glass and will have at the very least a garland of roses once she gets all of these flowers assembled.  Then for good measure she's got a few butterflies in the works as well.  I know someone who is keeping VERY busy! 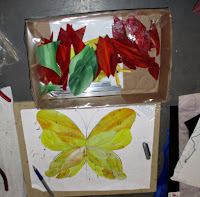 Linda's latest project is shaping up to be a winner.  The original design for this Ship In a Bottle called for the ship to be made as a single piece and the bottle as a secondary solid piece of glass that would be tacked on top of the ship.  My problem with this approach is that water and chemicals always get caught between the glass and since the front piece would be clear, build up is a very real problem.  Our solution is to simply cut the bottle around the ship.  The design practically lends itself to this approach with only one difficult cut.  With just one night of work Linda is making this look downright easy!

Linda L is fast becoming our student who always works in triplicate!  She's done three Pumpkin Panels, three Santa Panels and now she's working on three Mardi Gras Mask Panels.  They all slide into metal frameworks that make changing the design easy so Linda is making multiple sets to change things up for each of the holidays.  These masks are the most challenging panels she's yet to make  due to the number of pieces but as you can see she's cut through this one about as quickly as possible.

Jeannette squared up her window and got the background glass cut and tacked into place just before adding her final border.  Although they look similar, the purple border on the diamond section differs slightly from the purple border on the border that finishes off the window.  You may not see it now but you certainly will when you see it lit up.  Once that final border is attached all Jeannette needs to do is begin soldering this project. 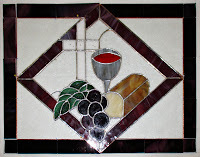 Well, Bonnie not only added a background to her Rose Bud and Stem Window-- she also added a border as well!   There was some creative finagling going down with this project but no one would ever suspect a thing.  And I'll never tell!  This will be completed before you know it. Have you recognized the rose bud?  Yep, it's a variation of the window that Ann is currently making and that Janet and Becky have made in the past.

Vickie is moving quickly in class even though she's our newest student.  This is the Fleur De Lis that she decided to make and this is what she accomplished in just two classes.  The FDL portion has been cut and tacked together and she has the background cut and ground now.  That means that this will be ready for a border when she comes back in.  I call that working at top speed. 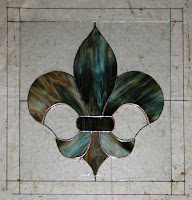 When life hands you lemons, make lemon-aid!  That's what Martha did this week as she cut and ground the glass for the lemon portion of her Seafood Window.  She's meticulously picked out  perfect glass for it and has even opted to use the rough side of the glass as the front side to give her window a little more texture.

Gale has begun working on this Owl Window which I know is going to turn out great.  I love the small overhangs of the branch and the Owl's tail feathers that reach into the background glass.  It means that she'll need to grind using the small grinding wheel but the end result will be very much worth it. 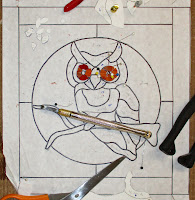 Sue started working on this Santa Face that she found online and then printed out.  The picture is slightly out of kilter but we'll address that once we cut the background and the borders.  As it stands this Santa is looking wonderful.

And here's the third Christmas Tree Lawn Ornament that Mary Grace is working on.  It's identical to the first two save for the texture of the green glass that she's used.  This just needs to be ground and then she can fit the red globs into place.

Next we have Cindy who resumed work on her LSU Tiger Stripe Fleur De Lis Window and is (as always) grinding as she goes along.  It's a method that works for her and that's fine with me as long as the quality of the work doesn't suffer-- and Cindy's work doesn't suffer for it.   I just don't recommend this practice to beginning students because it limits your ability to make adjustments on the fly without re-cutting. 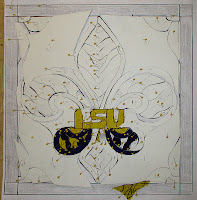 I was hoping that we'd see Shelley's Aquatic Window completed this week but we had a number of run thru's (lead that flows between the glass from the back side to the front side) that kept us from washing and coloring this mammoth window.  Rest assured that it's 100% completed now (except for it's bath) and that you'll surely see it lit up in our next update.

Lastly we have Terry who was working on something else while she was tweaking her LA/Tiger pattern but I can't recall what it was!  I obviously didn't get a picture of it or I would have that to jog my memory, but I do have a picture of her Tiger which is a lot easier to see than it was in our last update so I'll just post this here and apologize to her when I see her next week. 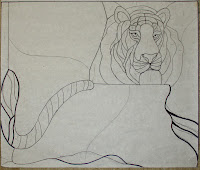 And that's what happened during our first week of classes in November.  My memory of some of these events is a bit blurry but I think I've properly matched each of the photo's to the students who were working on them.  But I'm not beyond being wrong on that...

Posted by Bayou Salé GlassWorks at 10:21 AM