I did something the other day in front of a student that I've never thought about passing along before.  It's a simple trick that I use all the time that you should too.

When you have an inside curve that is too deep to completely cut you end up using the grinder to 'cut' the piece into shape.  The problem with the grinder is that the water in it typically washes away the line as you are working on  it making you have to dry and then re-mark the glass from the pattern piece.  Sometimes this happens several times before the piece actually fits into place.  My way around this is simple but it does requires good lighting around the grinder.  Simply score the glass as you normally would-- just don't try to break it out.   When the marker line washes off at the grinder you'll still be able to see the score line (if you have good eyes and good lighting) which will allow you to continue grinding without drying and re-marking.  It takes a little practice to learn how to see the score line while at the grinder but in the end the payoff is a great deal of time saved.  Try it!

Okay, so our first completed project this week was made by one of our newest students, Lara.  She made this beautiful Modern Poppy Window that has a number of cuts in it that a beginner would normally not attempt.  We steered her through the cutting process and Lara didn't break a single piece of glass while making this.  The original design didn't call for a border but that's something that I always insist on incorporating and in the end it worked out beautifully.  Great work! 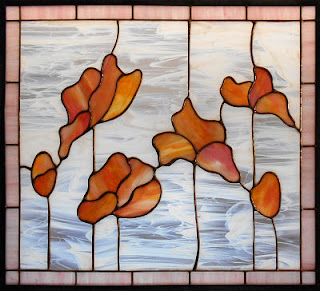 Our next finished project is this wonderful Shell Panel that Linda F finished up this week.  The window itself is about 12 x 12 so you know some of those small pieces were 'fun' to work with but in the end Linda's pieces all interlock wonderfully with nary a gap in sight. 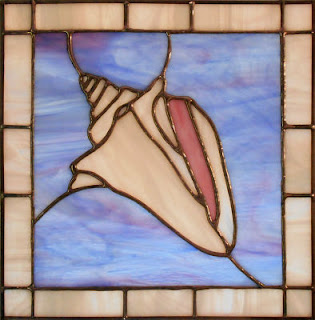 Susan R put the finishing touches on her latest Lawn Ornament which is a Gardening Glove with flowers growing out of it.  Talk about having a green thumb!  Susan is officially our Lawn Ornament Expert as she makes more of these than anyone else.

Our final completed window this week is Shelley's Duck Head.  Although she used krinkle glass for the inside of the head as well as  the background, there IS a subtle difference between the two areas.  The glass used inside the duck head has actually been cut from iridised krinkle.  It doesn't photograph well but of you look closely you can see the pink/teal/yellow hues in the glass.  Although she wanted all of the glass to be iridised, I think it worked out much better this way. 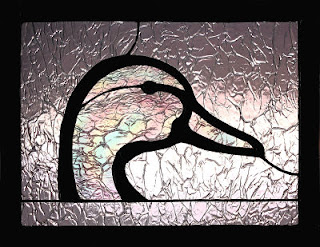 Becky S has begun cutting the glass for her version of the Eagle and Flag window.  This one is bigger than the one that Linda F made a few months back but the details are the same.  Becky only has to cut the white feathers and the beak of the eagle and then she'll be ready to grind. 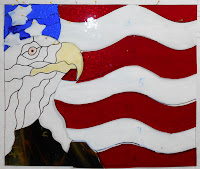 Linda L's Wine Bottle Window is just about all pieced together now.  The window is currently resting on cardboard with a hole cut into it which allows the full sized wine bottle (seen on the left) to hang halfway out of the front of the window and halfway out of the back.  The bottle will be soldered into place when she returns next week and then she'll begin soldering. 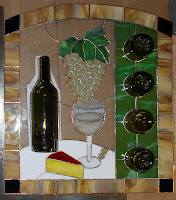 Mary Grace has begun grinding her Welcome Watering can Window and everything looks to be fitting together nicely.  Once the Watering Can itself is completed the rest looks like it will be fairly easy since it's made of straight lines.  Since Mary Grace has experience with the pistol grip cutter things should go nice and smoothly for her. 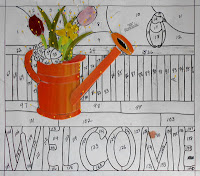 Charlie got all of his American Flag Window cut out AND ground this week.  Things went pretty smoothly for him and I think he fully understands the grinding process now.  It's almost like following a computer program that consists of 5 steps.  Just look how perfectly this all lines up.

Cindy has two more Large Suncatchers just about under her belt.  The Fleur De Lis is all ground and ready to be wrapped while the Geometric Window is ground, wrapped and ready for a final go over with solder.

Jeannette's Cabinet Door Inserts are both ready to be tacked together.  She went with a very thick border glass which has forced us to use a heavier channel around the edges of these two windows since regular brass channel wouldn't fit over the glass.  Luckily, the lip in the wooden doors that these are going to be mounted in easily covers the thicker channel and the added thickness will give these windows extra strength should one happen to slam closed at any point in time.

Paula has all over the glass cut for her New Orleans Window now.  This week we also saw her insert her Fleur De Lis flag in the upper right corner and then the 'Bon Temps' sign towards the center of the window.  The text and the image have been baked onto the glass so they're as permanent as permanent can be and the thanks to a new procedure the text is absolutely perfect.  She has her borders all cut already and we'll see them attached when Paula comes back in. 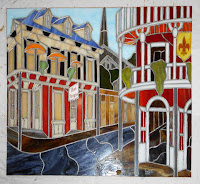 Ann's Acadian Flag window is almost ready to have its border attached.  She only has 12 tiny blue insert sections to cut out around her Fleur De Lis which I'm sure will happen next week and then she'll practically be ready to solder this. 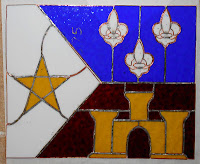 And Martha's Seafood Window is all cut and ground save for the background.  She's moved along onto the wrapping process and before you know it this window is going to be completed.  Martha's work is absolutely flawless on this piece and her attention to detail is to be commended.

Susan R got this Garden Trowel Lawn Ornament all cut and ground and is only about two pieces away from having it wrapped as well.  That means that we'll be seeing this piece completed before you know it-- maybe even as early as next week!

Terry has just one side left to go on her final border and then she'll be able to attach the Zinc Channel to this.  Once that's done it's a simple case of flipping this window over so she can begin soldering the second side of this beast! 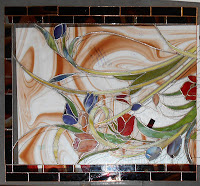 Barbara H made incredible headway on her first window this week and has now begun soldering it.  She's even taken it home with her so she can work on it during the week between classes.  Me, I can't wait to see this when it's completed which could very well be the next time we see her.  What a great job Barbara has done on this. 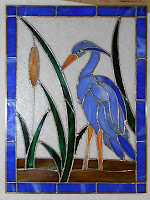 then there's Brenda who is in the process of soldering her Redfish Window.  I know that it won't be long now before this is hanging up in her son's window.   Brenda says that this is the last of these that she's doing so Jase had best take care of this one!  lol

Tasha managed to get all of her Fleur De Lis Window ground and handled the grinding process wonderfully.  She's learned a lot about small pieces and how to pin things down as she moves along, but the biggest tip that she picked up was that you need to focus on just one thing at a time.  There's only the final round border left to go on this and we'll get that attached as soon as Tasha gets this wrapped and tacked together. 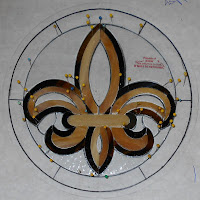 Myrt's fling pig is certainly going to be flying out the door when we see it next.  The front is already soldered and this little piglet has traded in it's diaper and T Shirt for a more Au Naturel look.  Is it true that every time you hear a bell ring a little piggy gets its wings?

Rowena has all of the flower cut out for her Long Tall Iris Window and does it ever look good.  She was originally going to go with a neutral Gray flower pot but I convinced her to go with something that has a bit more pizazz.   With added color on the bottom the window is equally balanced with the color at the top.  Rowena wasn't sure about this idea at first but when she held the glass next to her window a big smile lit up on her face and the glass was sold.  And she took it all so there's none left over for Carol!

Sheri's Cochon The Pig Window has its name and all of the background for the letters cut out and ground.  She even has the lettering all tacked together already which means that she only has 6 more pieces to go and then a border before she begins soldering this window. 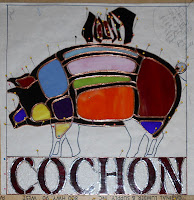 And these are the remainder of the leaves for Susan D's Flower Cornucopia Project.   She's going to wrap everything and begin finishing each individual piece as a suncatcher after which she'll wash the flux off of everything.  It won't be long before she starts tacking all of this together and we get to see the fruits of her labor.

And our final two pieces are a Butterfly Lawn Ornament which was completed by Rowena and a Sunflower Lawn Ornament by Jeannette.  Both of these feature beautiful work and extraordinary colors.  Rowena even made and soldered both the antenna's and the stake to her Butterfly all by herself. 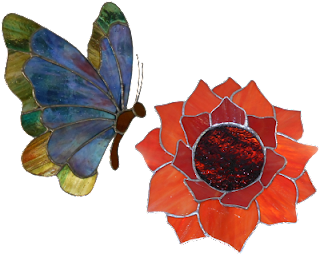 We had a weekend workshop this past week but I'm so far behind in my workshop posts that I need to get caught up before I postwhat happened this past weekend.  I promise that will be happening at regular intervals and that within 3 weeks we'll be completely caught up.