Solder In The Hole!

As we discussed last week, keeping things lined up is a very important aspect of making your glass look good.  Before I make a cross I draw a vertical line and then place a square against it to get a right angle out to the right.  Then I just extend my horizontal line so that it reaches to the left as well.  These red lines are what the cross will be built upon to make it symmetrical. 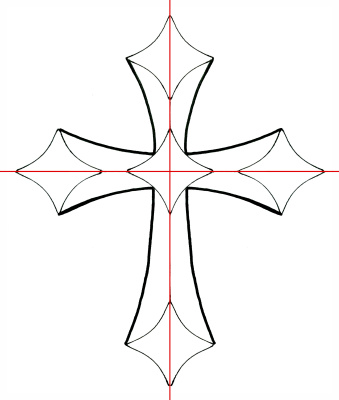 With a Fleur De Lis you'll need two horizontal lines to ensure symmetry.  If you use guidelines while drawing your patterns things will always work out well. 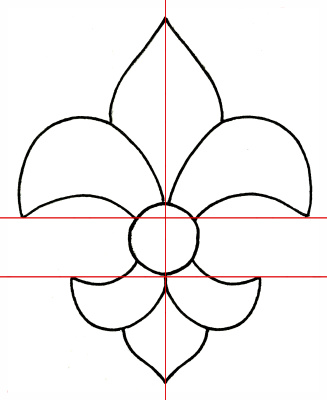 OK, I'm pleased to announce that Brenda has finished her Mardi Gras Comedy and Tragedy Masks and what a wonderful window it turned out to be.   The intricacy of the pieces (especially the beads atop each mask) make this an advanced project to say the least.   Brenda followed her pattern flawlessly and the results are spectacular.  I couldn't be happier with this window if I'd have made it myself (which I just might do). 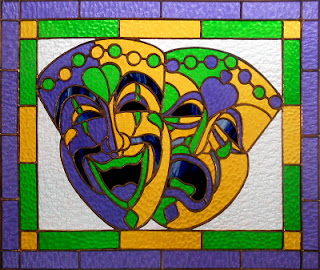 Rowena's Olivia Window is also perfection.  Her straight lines are right on the mark and the text itself is plainly legible with  downright beautiful penmanship. 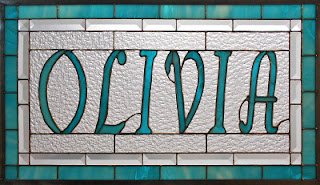 Tasha made her own Mardi Gras Comedy and Tragedy Mask Window and did she ever do a great job with it.  Tasha is learning that slow and steady always wins the race when it comes to soldering.  This pattern is based off of a painting that she had discovered on the internet and it proves that inspiration can come from just about anywhere. 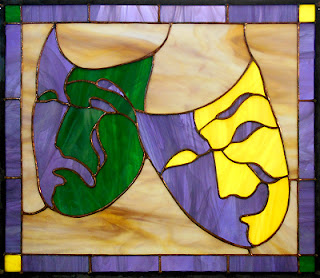 Cindy completed three more of the Curved Beveled Crosses and, as always, they look marvelous.  You just can't lose with this pattern. (And they all line up!) 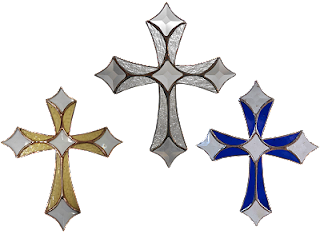 Carol has started a wonderful Water Lily Scene and what you are looking at below is just the bottom section.  Her window is very tall so she's working on it in two separate sections to make it easier to transport back and forth to the classroom.  Once this section is ground Carol will be able to tack it and then move on to the top portion of this pattern. 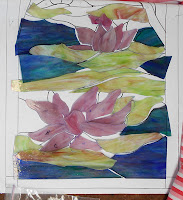 Becky S now has all of the border cut for her Cheetah Window and all I can say is, Wow.  She'll begin soldering this shortly but you can already see how good this is going to look before  it even gets lifted off of the work table.

Ann got all of her Fancy Fleur De Lis Window traced out and the pattern pieces cut.  When I looked up and saw that Ann was trying to find the best way to fit the border pieces onto the sheet  of glass I quickly reminded her that borders are never cut by hand.  I've colored the double border in with orange in the picture below to show you the sections that shouldn't be cut until the inside of this window is tacked together.   It doesn't matter if other pieces cut into the border, we always cut borders with a strip cutter.

Judy got all of her Seafood De Lis Window tacked together and she has the two top halves of the background cut and ground.  There were some intricate cuts in those two pieces but that's all behind Judy now. The rest of this should be very easy to do because the bottom is pretty much a piece of cake. 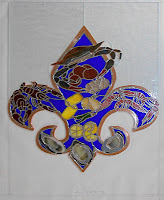 Myrt is ready for the final border in her Cardinal Window.  There a piece of branch that she has to add near the top right corner but that will only take a minute to fit into place.  This is already a very successful window for Myrt and I'm sure that Tracey will love it when it's complete. 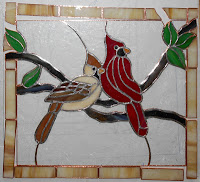 Jan has her baseball field all wrapped and what a great job she did on that.  I can safely say that Jan has the art of foiling down pat now because all of her pieces are even and concise.  This will get a background next week as well as possibly a border. 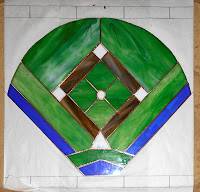 Jeanne is making a Stained Glass Box out of a textured clear glass and it's just about ready to be soldered.  She thinks that the top may be a bit large and I originally said that it wasn't but then after looking at it the next day I have to agree with her.  I always use opaque glass which hides the overhang but since Jeanne is using clear glass I completely agree with her reasoning for trimming down this box tops width by almost a quarter of an inch. 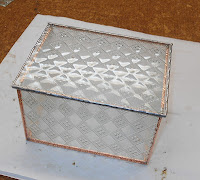 Susan R got her Mardi Gras Mask all tacked together and then she even got her border attached.  Although this piece wasn't completed when she left she did get the brass channel tacked on as well so that the only thing left to do is solder it.   I'd go so far as to consider this project finished and I hope we get to see it completed when Susan returns next week. 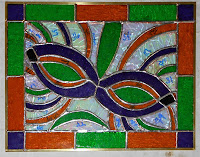 Tracy got all of her Mardi Gras Jester ground and while she was working on it I drew in a blue teardrop under his eye.   After looking at it a while Tracey decided that she might actually want a glass teardrop for her window.   I cut it out for her, ground it and then placed it on top of the stereo for safe keeping.  Since Tracy managed to leave without my taking a picture of her window this tiny teardrop is the best I can show you. 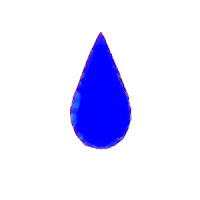 Mary Grace got her Rainbow Kaleidoscopic Window all tacked together and is already about to start soldering it.   Her border was made by cutting long glass strips at random angles and then cutting the next piece from the previous piece.   It was entirely random and it's absolutely perfect for this design. 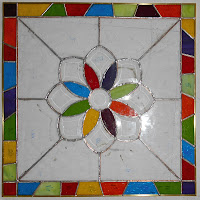 Mary came in and got a quick lesson on skimming pieces of glass on the grinder which is about all she needed to do with her six background pieces.  Once that was done she was able to wrap them and tack the center of this Fleur De Lis Window together.  She then cut and skimmed her blue inner border which she has taken with her to wrap at home throughout the week.  Expect to see the final border of this window get cut out and tacked when Mary returns next week. 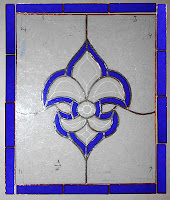 Barbara's Autumn Train scene is looking WONDERFUL!   She's arranging the glass colors perfectly and really getting some depth to show in all of those pieces.  I can't wait to see this window completed because it's going to be a show stopper.

Jeannette got all of her Mermaid Window cut, ground, wrapped and tacked!  I put on a channel for her just before she left and I can honestly say that there's no doubt that this will be completed when Jeannette returns. 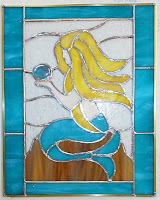 Lara got all of her Parishes ground and tacked together and then moved on to cutting out background glass.  Lara came up with the idea to use blue along the bottom to represent the water that touches Louisiana.  I guess it's safe to say that there isn't very much left to go on this window before she can start adding borders.

Martha has her newest Fleur De Lis Window well under way as the background has been tacked together and her first accent border has been all cut and ground.   Look to see this window being soldered when we see it again. 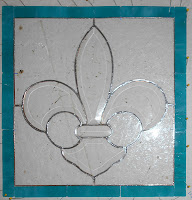 Susan D forgot to bring the pattern for her next window along with her but she did have the patterns for the flowers that she used in her flower cornucopia extravaganza a few months back.  Since she's making a second one she got four flowers cut and and ground rather than wasting a class.   Next week I think we'll see her fireman window get started and just wait until you see that. 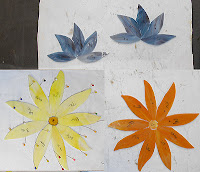 Terry is on a Butterfly roll and this is either her third or forth in the series.  Now that Terry is cutting her own borders she's been going a little crazy with the double borders which is something I ALWAYS do myself. 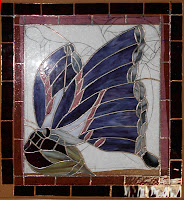 Shelley has got the front side of her Stormy the Three Legged Cat Window pretty much soldered and will be flipping this over before you know it.  The only thing left to do is to add the pink sections of the ears (which Shelley accidentally left at home).  This cat is about to walk out of the door. 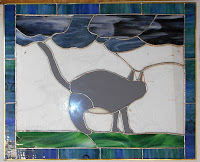 And here's a look at Cindy's next Curved Bevel Cross Suncatcher.  I'm not sure of this is here last one or not but she certainly makes quick work out of these.

Brenda not only completed her Mardi Gras Tragedy and Comedy Masks this week-- she also started to work on this large Cross Suncatcher that her sister has drawn for her.  We'll get a better look at this when she returns 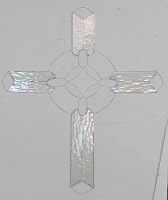 And Bonnie started working on a new Butterfly Lawn Ornament but I never got a picture of it.  Here's the pattern that she used to get one of two butterflies cut out.   You can fill in the missing colors any way you want to! 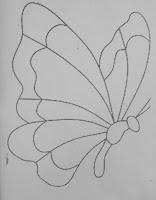 Now we're here at the end I'll tell you that Linda L worked on the letters on her Welcome Windows but left class early due to illness.  Thankfully she's feeling 100% better now but we won't be seeing her for three weeks due to Mardi Gras obligations, a cruise(!), and our cancelling classes the following week for our own annual Stained Glass Class Cruise.

And that's it in our last post for the month of February.  Where is the time going????


Posted by Bayou Salé GlassWorks at 12:43 AM