So Now I'm A Lady-Doctor?

Sometimes a cut just can't be made and you'll find yourself having to grind away a large portion of glass to get your piece to fit (as in Martha's Fleur De Lis later on below).  When you find yourself making deep grinds it's important to do two things:

So simple and sooo effective.

Well then, this week Shelley finished her vibrant Sunburst Window and is considering making another in shades of gray to represent a moon themed window to match this one.   She did a great job all throughout  making this and I can honestly say that she's mastered the art of stained glass making.   She also worked on a repair this week and walked out the door with that under her belt as well.   What a wonderful job she did on this. 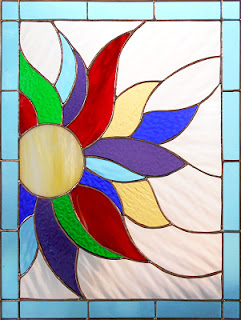 Brenda made this oval Iris Suncatcher while she was at home and brought it in for some quick hooks and for it to have its picture taken.   I must say that it showcases Brenda's beautiful work and she should be proud to turn out such a beautiful and intricate Suncatcher all on her own. 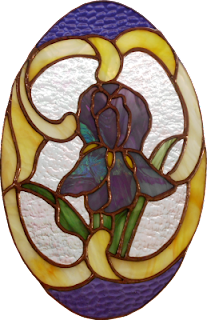 Carol completed her small Humming Bird Panel and went the entire nine yards by cutting the strips and then sectioning them off to make the border that surrounds this window.  Her colors are perfect and the workmanship is flawless as always.  This is certainly a charming little window. 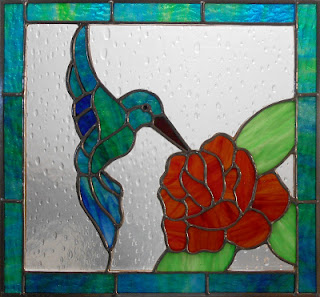 Tasha completed her Bowl of Hygieia Window this week even though she didn't get a chance to solder it while at home.  She came in, took a deep breath, and took her time with the soldering which left her with a window that needed very little touching up.   Tasha did wonderfully on this as you can clearly see for yourself. 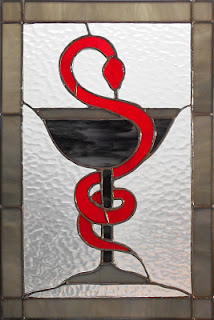 Mary Grace both started and completed this Santa Hat in both a quick and efficient manor.   And if I do say so myself the soldering on it is perfect.   Ease in soldering lies in direct proportion to the quality of the foiling on the piece.   Wrapping neatly is a very important part of the stained glass process and Mary Grace saw exactly what a difference it makes with this beautiful Santa Hat. 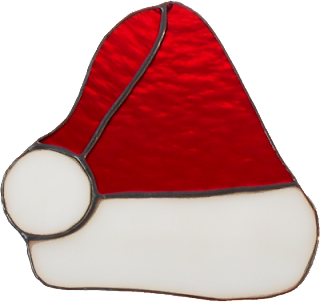 Carol also came in with a Bee Lawn Ornament all cut out and ready to be assembled and that's exactly what she did.  After learning the easy way to curve the body and the wings she got all of this Bee put together and soldered by the end of class.  I guess you can say that she was as busy as a bee. 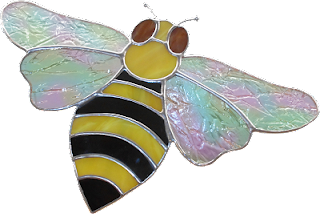 Rowena finished her Beveled Cross and it is another example of the elegance that bevels bring to a project.  This is perfection at its finest. 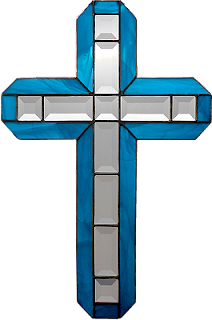 Bonnie flew through her second Multi-colored Fish Suncatcher proving that you can pick up serious speed when you do a project a second time.  We also added a cut so that this fish can hang from just one hook rather than from two hooks and a chain. 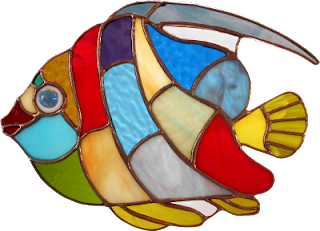 Cindy is just about finished cutting out all of the glass pieces for her Geometric Circle Suncatcher and will most likely be wrapping her glass soon.   It all fits together wonderfully and I'm sure her customer will be thrilled with this.  A geometric design is always tough to work on since precision is of the utmost importance, but Cindy makes it look easy. 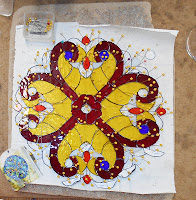 Melissa came in with all of the pieces to her Stylized Fleur De Lis wrapped and ready for their first coat of solder.  Once it was all tacked together she got her border pieces cut out and attached as well.   Next week, after she learns how a brass channel is attached, Melissa will begin soldering and although I know she's a little anxious about it I also know that she'll do just fine. 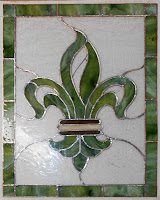 Jeannette has two of her three Beveled Insert Windows completed leaving only one left to go.   The first thing she did when she walked in the door was to  get all of her border pieces wrapped and tacked together.  Next, brass channels were added to each window and then Jeannette began soldering.   She has only one window left to go and the soldering left on it is minimal at best so these will positively be completed when she comes back in with plenty of time to spare.

Tracey began grinding her Address Window and all I can say is, wow, what a great job!   Straight lines are always problematic but Tracey handled these as if they were nothing.   Little grinds, multiple times is the best way to handle grinding a window like this and I have no doubt that Tracey will begin wrapping when she returns next week.

Ann came in and although she wasn't able to stay the entire length of the class she still managed to get a lot more ground on her large Fleur De Lis Window.   She's got the bottom and the two side arms of the FDL fitting together leaving only the top center section to go.  Once that's done she'll tack everything and then get her background cut out. 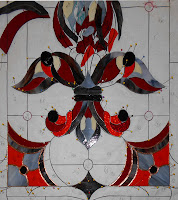 Paula now has all of her Wedding Box top cut ground and tacked together.   She plans on soldering this at home and once this has a nice bead on it she'll be able to get the box bottom started (and most likely finished).   With the hardest part of this project behind her Paula can breath easily now. 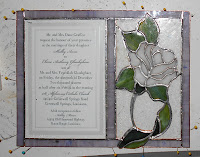 Brenda resumed the work to make her oval window into a rectangle window.   She's added fancy corners that match the oval decorations which really ties everything together in a way that prevents the rectangles from looking like an afterthought.  I must say that this works for me! 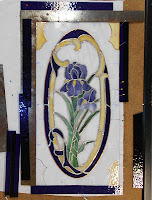 Roxane is back!   She made an appointment with me and everything checked out A-Okay.   She cut through her Red Cardinal and some of the background pieces to form a branch that runs in front of the bird.   Once the bird was altered she re-wrapped those few pieces and then tacked everything together.  She's going with a double border on this window and with her pieces almost completely cut out she'll be soldering this soon. 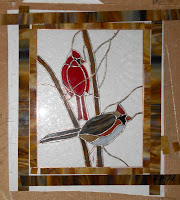 Becky S made steady progress on her two Birds on a Wire suncatcher.  When I call this a suncatcher I have to stress the fact that the number of pieces in these Birds On A Wire projects out number the pieces in most windows two times larger.    And each piece of glass you see in the photograph is resting atop another piece that Becky has cut and ground to perfection because she's making two of these at once.

Susan D is almost ready to start soldering her Fireman Window!   After getting the center tacked together she got her first inner border cut, ground, wrapped and attached.  From there she moved on to the final border which is all cut out into pieces and ready to be skimmed on the grinder and then wrapped.   Soldering this window is only a heartbeat away and just look at the face on this fireman.   Beautiful. 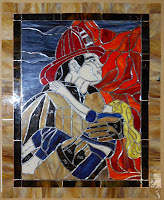 Judy has officially gotten all of her glass attached to her Seafood Fleur De Lis and also saw the zinc channel get attached on all four sides to give it some added strength.   She's begun soldering the first side and I have to say that she really made a lot of progress on it.   This may very well be completed in two more weeks. 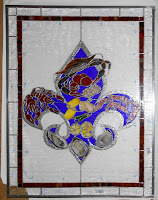 Martha got the background to one of her Fleur De Lis Windows cut out and as you can see she also has the ther two FDL's tacked together and ready to be surrounded by glass.  I have no doubt at all that we will see that happen when she returns next week. 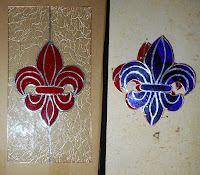 Rowena not only completed her Beveled Cross, she also worked on her newest Transom Window as well.  Luckily, this one will be smaller than the last one that she made which means that cleaning it and transporting it will be considerably easier.  The bevel cluster has been tacked together and some of the background has been cut out already which means that this just might have all of its background cut when we see it again.

Myrt got all of the background glass cut and ground for her Humming Bird and Fuchsia Window so she'll be ready to wrap all of these pieces when she comes back in.   Once that's tacked together she'll add a simple border and then be ready to solder it.  And you know what we say about Myrt, don't you?   She may be short but she can solder up a storm! 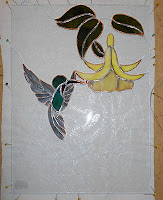 Barbara is almost finished with the tree section of her Train on a Bridge Window and I'm going to have to start thinking about how the train will actually attach.  Ideally we would cut it into the sky but the intricacy of the shape of the train may force us to tack it on top of the sky.   We'll see what happens as I ponder this for a few days.  I just hate making rash decisions.

Lara is working on finishing her Mother's Tree Of Life window and with the multi colored border all cut and ground she'll be able to start soldering this when she returns next week.   I can't wait to see this window completed and hanging up with some light behind it because I think this is going to really light up the room. 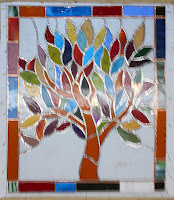 Linda L is about to see the light at the end of the tunnel with her three Welcome Windows.  With  the few  missing pieces re-cut and tacked into place Linda also got all of the border piecess cut.  She's skimmed everything on the grinder and is now wrapping these remaining pieces.  Once they're attached she can start soldering!

Susan R has started working on this Spring Window which she found on he internet.  She just printed the window out to the size she wanted and used the printout as a pattern.   So far she's only got as far as getting a few pieces of green glass cut out (which is hard to see on the colored pattern) but I have no doubt that she'll have a lot more completed next week now that the paper pattern pieces have been cut out and separated. 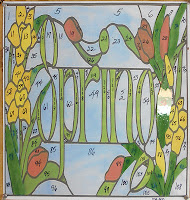 Mary Grace also worked on this 7 piece flower suncatcher and got everything cut out before she left.   As you can see she's got things pinned into place so that means she started grinding this as well. 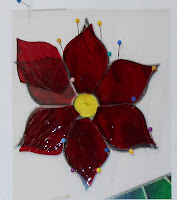 Terry worked on another repair this week and although there were endless gaps throughout the pieces that make this window (since this started off life as a lead came window) they all evened out in the end due to careful placement and tacking.   As long as you split the differences and take your time placing the pieces just right (with a ton of pins to hold things into place)  you can cover a multitude of sins.

Sheri began work on her Crane Window this week and it all started by tracing out the paper pattern.  There are a LOT of pieces in this one so it will take a little time before we see this completed but the end result will surely be spectacular. 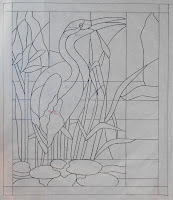 Lastly, Mary  completed her Mystery Window and all I can say is that it turned out wonderfully.   Her next window will most likely involve a Butterfly and you'll get to see that one as it progresses from start to finish.

That's it for this round.  See you again soon! (No promises this time though...)