I Will Stab You With A Fork


Lately a lot of people have been having issues transporting their windows.   Most of the problem is that the glass bounces in the car and pieces end up missing or all mixed up.   I won't even tell you the number of pieces we find in the driveway just from carrying a window out to the car, so how do we solve this problem?  The answer is very simple.   Always have a large sheet to help transport your project.   Set the window on top of an opened sheet or blanket and then flip each overlapping side up and onto the project.  The weight of the four overlapping edges prevents pieces from bouncing.  Pieces are locked in and are very hard to lose this way.   Imagine no more looking throughout your car or the driveway for your missing pieces! 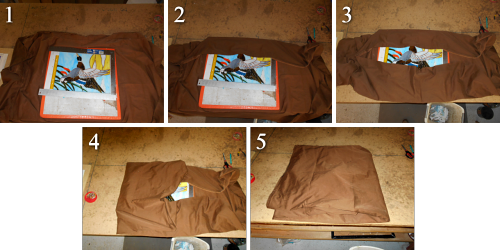 Okay then, sadly Terry was unable to get any work done on her Caduceus Window during the week between classes so she ended up finishing up the soldering on her window here in class anyway.   She made short work of the soldering process and had the window completed by the end of the night.  And the best part is that I got to get a picture of this beautiful window. 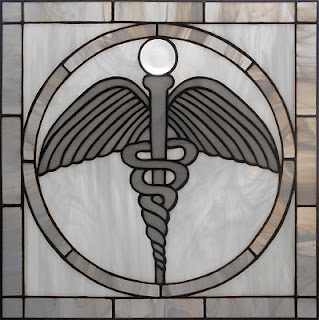 Jeannette completed a new Fish Suncatcher and it's a colorful design indeed.   She has a few of these cut out and ground so expect to see more as the weeks progress! 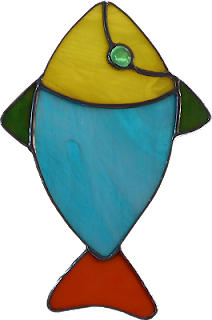 Carol finished these three frog Nightlights that she started at home and then got the clips attached to hook them onto the actual nightlight bases.  Great job! 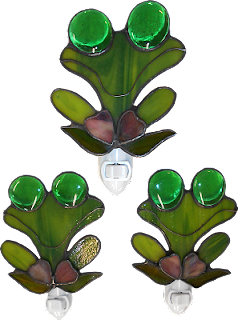 Rowena completed her first Bear Lawn Ornament and has a matching Polar Bear in the works.  Her menagerie just keeps growing and soon we'll be seeing a zebra, a tiger and a monkey! 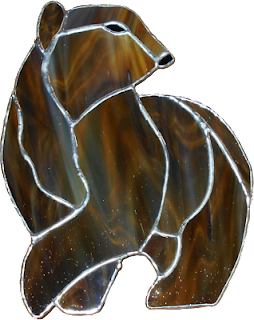 Susan R completed another Rose Lawn Ornament and I think the color scheme is even prettier than the last one she made.  This is truly a beautiful rose design. 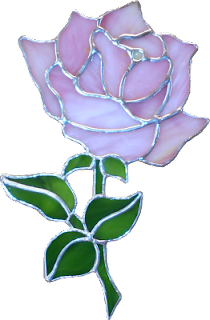 Roxane cut out the few remaining pieces of her Cross Sunburst Window (which only took about 20 minutes) and then she started grinding.   While she was cutting her pieces she made sure to stay within the lines leaving very little grinding to do.   She's spent about two hours worth at the grinder and she's already got three quarters of it completed!   Incredible.  And look how wonderfully everything lines up.  She'll easily begin wrapping these pieces when she returns. 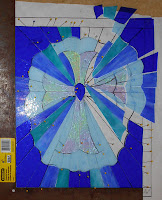 Lara started another Window featuring an African Woman and her color choices are spectacular yet again.  In just one night she got all but her background cut out and this is one of those cases where the background will be cut AFTER the subject matter (the woman) is tacked together.

Becky S was hard at work on her second Birds On A Wire Panel and she's ground all of the pieces that she has cut out now.  As you can see there are only a handful of pieces left for Becky to cut out and then she'll return to the grinder and start wrapping all of this.

Brenda had all of her flag ground when she came into class so she spend her class wrapping all of her pieces.  Her granddaughter had made a stencil for the stars and Russ was able to coat it with glass paint and then remove the stencil leaving behind white stars!   A few of the stars smudged a bit but they will be straightened up when the paint is finally dry.   Once they look good they will spend the night in the kiln to make these stars permanent. 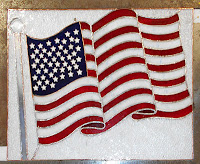 Janelle is just two weeks into cutting her Pelican Window and she's already got everything cut. She's moved on to the grinding process and already has the pier and the water to the right of it ground so she's doing quite well indeed. 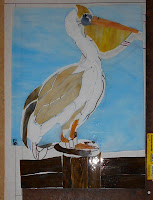 Tracey came in knowing that she was going to make a Deer Window and immediately traced out the pattern and then cut it all up.  Next she traced out her brown pieces of glass and got them all cut out as well.  That's great progress for one night and this already looks like a deer. 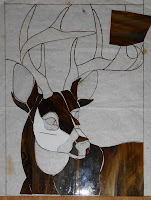 Jeannette almost had all of her beveled window cut out and tacked together but a bad cut left her short one piece of glass.  Accidents will happen but in stained glass we can fix them easily IF we have the glass to re-cut the piece from.    We had something close, but not a perfect match so Jeannette is going to look elsewhere for a perfect match so she can use it to fill in her missing piece perfectly. 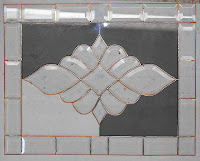 Bonnie has her own Birds On A Wire Window just about ready to be foiled.   With all of the grinding completed on this I'd say that Bonnie is making short work of a difficult project (and using up her scrap glass in the meantime.)   I think she's really going to love this when it's completed.

Linda L  got an incredible amount accomplished this week as her Address Window got its two side background pieces, a beveled border and then a final border attached.   She's ready to spend some quality time soldering!

Melissa worked on cutting out the birds for her large Bird Window and she's used two different greys for shading purposes. The art of shading a bird that is essentially one color is in avoiding using two colors that contrast sharply even though they are the same basic color. Subtle differences are always more natural and that's what Melissa achieved here.

Carol also got a new Hand Mirror started and then got a stylized beveled cross tacked together even though the bevels didn't line up correctly.   In the end we angled them so there were gaps between the bevels which gave us four arms pointing perfectly at the 12, 3, 6 and 9 positions.   This proves that you can never just assemble a bevel and expect it to line up with perfect symmetrically.  And NEVER trust the pattern that comes with bevel clusters-- they've been photocopied far too many times to trust

Mary  is wrapping all of the pieces for her Bird window and has discovered that small pieces aren't what you would call a picnic!  She also worked on foiling pieces while she was home throughout the week and really got a lot accomplished.   Next week we're going to fit all of her berries into place and finish up the wrapping phase of this window. 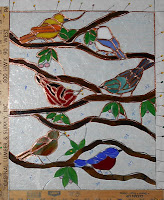 Rowena also came in with her Mallard Window completely cut out and ground as well.  That means that she had only one thing to do-- start wrapping glass!  Looking good!

Sheri spend her class grinding away at her Crane Window.   As you can see she's making great strides and will soon be ready to begin foiling all of these pieces.  Now that things are fitting together it's far easier to see what her pattern actually looks like.

Cindy spent the night grinding and then wrapping another panel in her Panel Lamp.  Since I can never remember if it's a six or eight sided lamp I wrote a big 6 on the paper pattern but Cindy isn't using the paper pattern anymore.  Luckily I do recall writing the number 6 on it.  As a pleasant surprise, Cindy's sister Becky tagged along this week and helped with some of the grinding and wrapping.   If Martha decides to leave we have a replacement for her!  lol 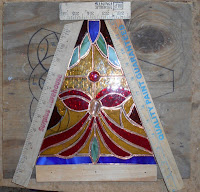 Ann  already has both the front AND the back sides of her large Fleur De Lis Window soldered and will end up washing and then coloring her window next week.   Getting both sides soldered in one night is an astounding accomplishment that was possible because she realizes that slow and steady wins the race. 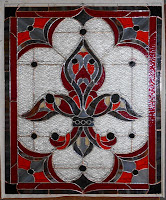 Myrt continued working on her second Peace Sunflower and has it all ground and ready to be wrapped.   As I said before, she's moving quickly on this one and I wouldn't be surprised to see her walk out the door with it when she returns. 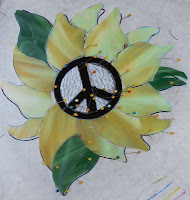 Barbara H has all of the soldering finished on her Autumn Train Scene and now she's just touching things up.  She's going to be adding some wire work to form the railroad trestle when she returns. 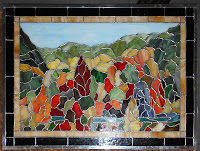 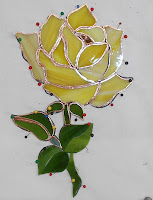 And lastly we have Susan D who is back in action making more leaves and flowers for her next Flower Cornucopia.  These have all been cut, ground, wrapped, and soldered! 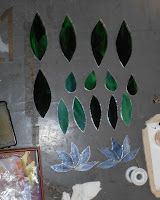 That about wraps things up this week.