You Can't Afford To


We've been having questions again (it's a re-occurring theme in class) about how the grain should flow on the different pieces of glass in a window.   Most people run into problems when they overthink it.  The 'rules' are simple but keep in mind that there ARE times when we break them.  By and large though, we simply follow these three simple rules:

1.  Mark you grain lines BEFORE you cut up you paper pattern.

2.  Grain lines should follow the length of the glass.   (In other words, put the longest line that you can on the piece.)

3.  Background pieces run horizontally (left to right) unless you have glass that looks like rain or falling water.

That's it.  Too many people think that the grain should run from left to right on ALL of their pieces.  Doing so gives you the flower that you see below on the left.  The flower on the right was colored using the same piece of glass but with the grain following the length of each piece.   It's quite a difference don't you think?  I also put the lightest sections on the outer ends of the petals whenever possible and tried to avoid any harsh straight lines. 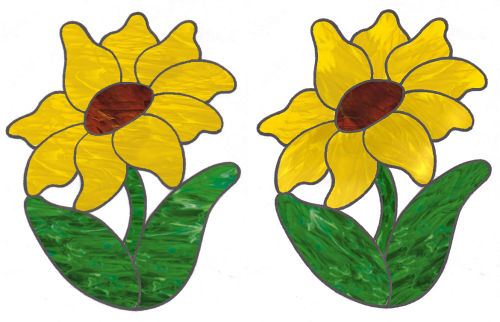 So remember to mark your grain lines with the length of the glass and you'll be fine.  (It won't always be from left to right.) 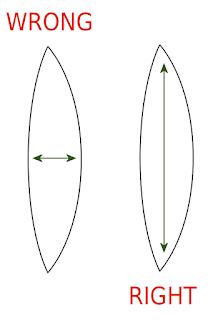 Once you have grain lines on your pieces you needn't think about it again-- just place them on the glass as they are marked and you'll be absolutely fine.


Well now, Roy surely did an excellent job on his Wine and Grapes Window.   He did the majority of work on this while at home and with each project I see him getting better and better.  Two  of the things he learned  was that Grapes are a pain in the glass and that when cutting out grapes you ALWAYS need to number those pieces! 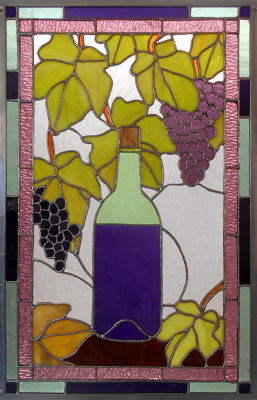 I wasn't sure when it was drawn out on paper just how this would look since it was based on two different pineapple sketches that I merged into one.  I will say that it was to the best of my abilities but sometimes that isn't enough.  As you can see however, Rowena did a splendid job on this design and created a pineapple that's not only realistic but truly says, "Welcome." 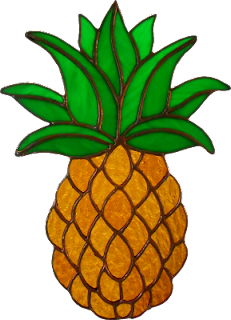 Betty completed her 3D flower Suncatcher this week and learned how to tack two pieces of glass together so that one overlays the other.   The leaves are actually on top of the bevels that they 'point at' in the pattern below.  Betty added an extra helping of lead in the middle of the flower to give it a center which I feel tops it off nicely . 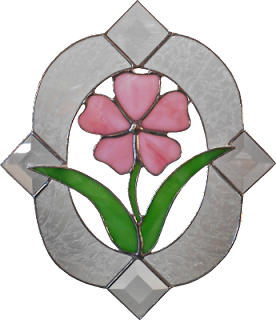 Koy the kitten may be gone but his likeness lives on in stained glass.  Shelley added wire whiskers to the face of this cat and the end result was more than worth the small amount of time it took to do so. 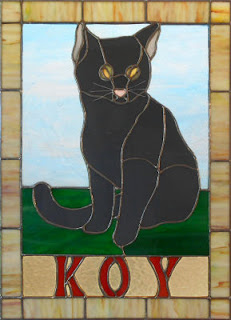 Rounding out our completed projects this week is Cindy's small address panel.  I'm not sure where this will be mounted but I'm guessing it goes into a mailbox since the finished piece measures only 6 inches tall.  The picture below isn't the best but that's only because it still has flux on it because it wasn't washed yet when Cindy took it home with her. 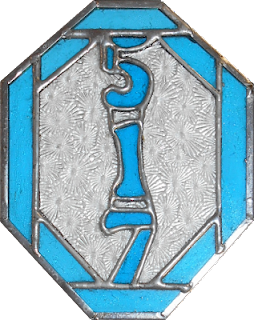 This is Terry's latest creation and it's yet another of her own designs.  Her humming Bird and Flowers Window is already all cut out and is now being ground to fit.  Terry wastes no time when it comes to window making! 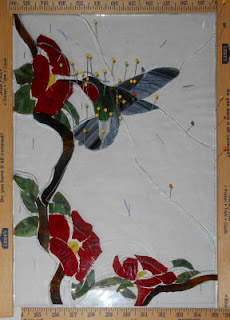 Speaking of flowers you can see that Beth is moving along at a nice pace on her Flower Window.   There are only a few pieces left to cut but since there are so many tiny pieces that can easily shift (even if they're pinned down) we've decided to begin wrapping and tacking together what Beth has ground here. 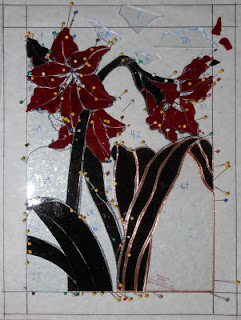 Betty also managed to work on her two Jesus, Mary, and Joseph Suncatchers.  With the front sides soldered she'll move on to the back sides of these when she returns and surely have them completed. 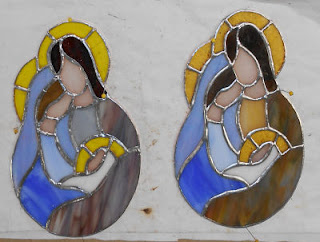 Lara has begun cutting glass for her stylized New Orleans House and the pattern itself is literally split in half across the center (because of the two floors of the building).   To minimize confusion Lara is cutting, grinding and tacking the bottom half of this window before she starts the top.  This is going to be a bright Window and a real head turner for sure. 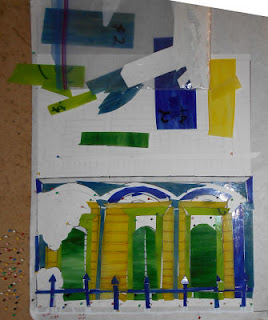 Brenda has her Magnolia Window halfway wrapped which means that she'll be looking for a border glass when she comes back in.  That won't be next week though because Brenda will be spending time in her camper during the 4th of July week. 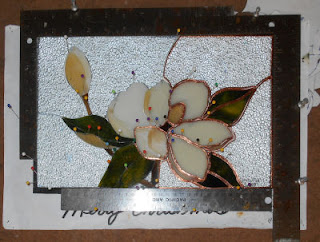 This is the center portion of a window that Jan is making.   There will be a little more extending outward from the left and right which will make the border that surrounds this really something to look at.   Jan is just about ready to get the background cut for these flowers and she'll be using a single piece of Baroque Glass so that the twisting flow of the glass remains intact when this is put together. 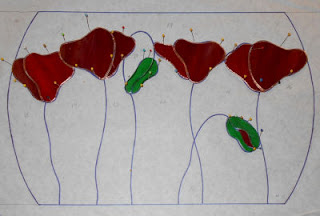 With two more sections of her Panel Lamp completed Carol hopes to be able to assemble the six panels into a single lamp when she returns next week.  Once the panels are soldered it doesn't take long to join them together so that could VERY easily happen. 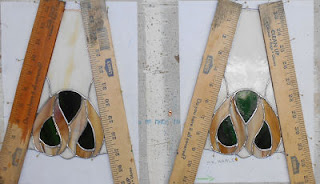 Martha got her Lighthouse and Sail Boat Window resized and then all cut out as well!  The sky was cut from a single sheet of Baroque Glass (much like Jan's background) and it already fits together perfectly.  Her ocean water was cut from a heavier textured glass which helps give the waves some 'depth'.  This will surely be ground before Martha expects because things are going to be able to move quickly now. 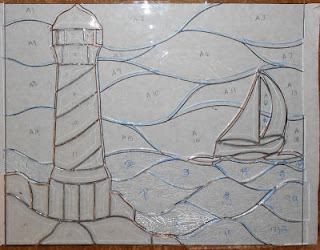 Linda L has some more of her Ocean Floor cut out and once she gets about four more pieces completed we will tack this and then get the rock behind her coral all cut out.  And that should happen real soon... 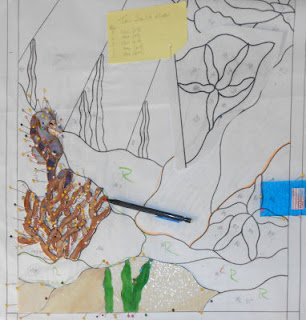 Mary spent the night cutting out the feathers for her Dream Catcher Window and the only thing left to cut is the background!   Mary actually cut the ribbon pieces while she was at home and she did a wonderful job getting them to essentially fit even though they aren't ground already. 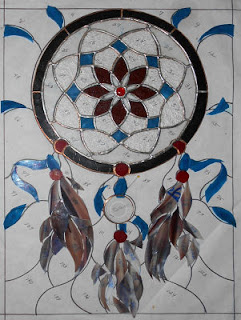 With all of the 'cloth' cut out for the background of her Sacred Hearts Window, Melissa focused on grinding the pieces into place.  Once they fit together she'll cut fold lines into them which will ensure a perfect fit.  It's all about perfection with this window and Melissa certainly has achieved that already. 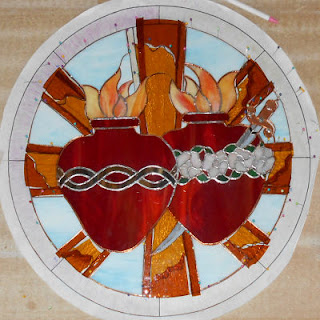 Myrt found her Geometric Suncatcher that she had forgotten about under the table this week and got that ground so she could take it home and wrap it.  Then she moved along to her Pair of Cardinals Window which is already recognizable even though not a single piece has been ground.  That's called good cutting! 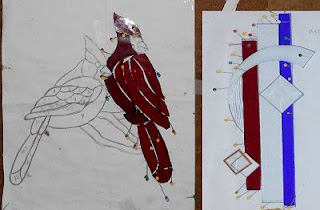 With all of her borders attached Tracey is now ready to begin soldering her very long Address Window.  It's now too large for me to fit in a picture unless I set the window on the floor and hold the camera above my head.   Do you know where she lives?  I'll give you a clue as to what the street number is....

Patrice started another Sunflower Window this week and she's already well under way on it.  There is no doubt at all that she be grinding on this window when she comes back in because she's done this once before and the second time through a project always goes much faster. 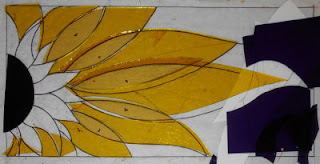 Rowena worked on two projects this week, the first being a UL Suncatcher and the second being a suncatcher representing her Alma Mater.    With just a flag pole left to cut out and grind, Rowena will be able to start wrapping these suncatchers even before she comes back to class if she wants. 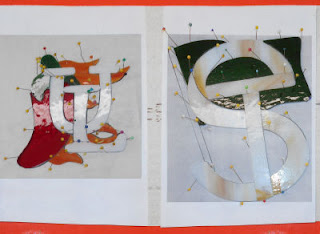 Susan R only has to fill in one missing piece and then she'll be ready to tack this Chef together and get the border attached.  You've got to love that glass of wine he's holding up because it was cut from a single piece of glass.   There was actually a spot on the purple glass that ran completely clear which made for a fortuitous  piece to utilize in her window. 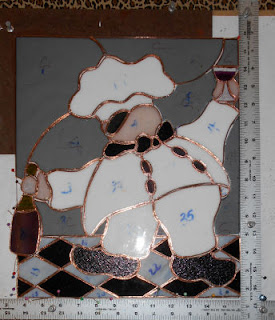 And that about wraps things up on this 4th of July Week!