Jan has completed her Poppy Window and the intricate bordering really makes this design stand out.  It's a very simple and open design that the opened oval helps maintain.   Stretching out the poppies to the full length of the window would have made this design look empty thus losing all of its charm.

Airplanes are IN!   This is Sheri's version of the Bi-Wing Kaleidoscope and what a great job she did with it.  She went with a John Deere color scheme and the end result is perfection. 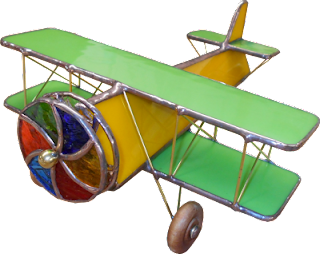 We looked at Roy's Airplane Kaleidoscope last week but he brought me this picture of it with the plane's numbers attached so I just had to pass it along and let everyone else see it.    You've got to love those pontoons! 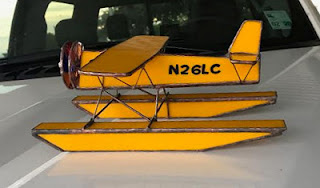 Angie has done some extremely fast work on her New Orlean's Saints Window.   With the front side completely soldered and the back side almost finished (in a week's time) I'd say that she either loved working on this or she couldn't wait to get it finished so she could move along to something different.   My guess is the former. 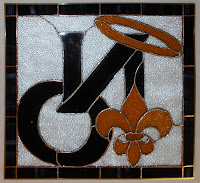 Patrice has her Duck all ground and fitting together now.   Her fitting is meticulous and I have little doubt that this will be completed upon her return.  She has an idea for the duck's eye and we'll see how that works out when she comes back in. 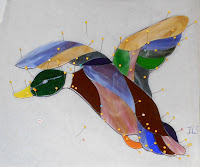 I was all ready to say that Betty is starting her Christmas Windows VERY early this year but September is already upon us so I guess she's right on time.  Where is the time going???? 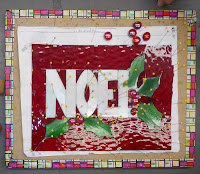 Carol spent her day working on Mickey Mice's and two stands for the kaleidoscopes that she made last week. The stands are all ready to be washed and colored and her Mice are right about ready for hooks and a bath as well.

Check out the new look for Jeannette's Flamingo Lawn Ornament.   With some background glass applied, as well as a border, she's managed to turn a large Lawn Ornament into a standard stained glass window!  What you see below is the back side which means that this will be completed when Jeannette walks back in the door next week.

Rowena's added a background to her beautiful fish window.   She had considered using an all clear background but in the end she decided to add water along the bottom and sky across the top.   That means that she'll be changing the center opening of the fish because Rowena used clear when she started cutting glass and now it needs to be blue (if you enlarge the image you'll see that I put x's on the piece that needs to be replaced).  It's actually a simple fix and you'll see the end result next week. 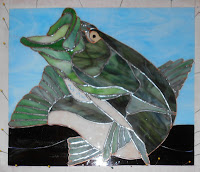 Barbara got a lot completed this week as her Humming Bird and Fuchsia Window is almost all tacked together (there's just a few pieces in the final border left to wrap and tack).  I know that she's begun soldering this at home as I got a text asking if it was okay to flip the window over to solder the second side.  And the answer to that is---YES! 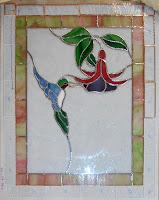 Lara's use of iridised glass for the oval background of her African Woman is certainly turning heads.  Everyone thinks it was a perfect choice and with just some background glass left to pick out and cut, this window is very near ready to be soldered. 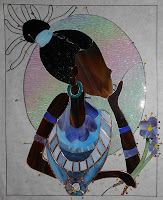 Susan R's Woman Emerging is totally taking shape now and I think it's a winner.  There's just something about these Women Windows that I find appealing, and apparently every one else as well since there are so many of these types of patterns out there. 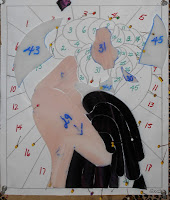 Linda L not only got all of the water cut for her Underwater Scene, she also got the first border cut, ground, and attached as well!  She has the color picked out for her final border so I have no doubt that she will begin soldering this beast of a window next week after the last border is tacked on.

Susan D is wrapping her Tree Of Life Window and the pieces that she has completed show you pretty much what this window will look like when she has it leaded and colored.  Gorgeous.

Melissa says she thinks she's moving slow on her Autumn Leaves Window but as I always say, I'd rather see  quality work over quantity.  I know she's doing a great job and that she has NOTHING to worry about.

Becky now has two of her three windows just about completed.  With the third one ready to be ground she's making excellent time on this trio of projects.

Oh my, Beth has packed up before a picture was taken.  She has been chastised and promises this will never happen again!  I have to say that I was thoroughly impressed with the fact that she got her entire Sand Dollar Window ground and fitting together beautifully in just one class.   Outstanding! 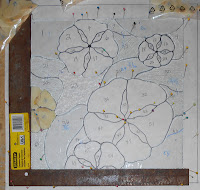 MiMi spent her night wrapping glass and her Crab Window is looking magnificent.   I know that she's been VERY busy at home because the last Facebook post I saw by her showed this completely wrapped in foil.   That means that she'll get a border on this when she comes back in. 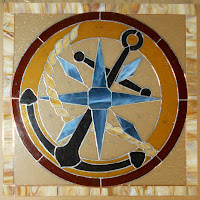 Roy has begun cutting glass for his Transom Window and he's been doubling and quadrupling up the pieces on one quarter of his pattern.   It may be a large window but I think he'll move along on this just fine.   the only hard part will be adding the final border to it once it's all tacked together and to be honest with you-- it's not all THAT hard at all.

Shelley is so close to finishing her Wine Women that it isn't even funny.  With the front side complete she's flipped it over and got a good 80 percent of the back finished also.   Let's just consider this a done deal for next week!

Tracey worked hard and fast as she she got her second border cut, ground, and attached.  Then she soldered the first side of her Cardinal Window and got a brass channel attached to it as well.  When she completes this next week she will move along to a second version of the same window using similar but different glass. 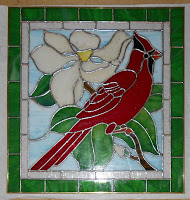 Myrt, Cindy, Terry, Brenda and Martha all attended Flight School this week.  In other words,  they each worked on Airplane Kaleidoscopes (otherwise known as Aeroscopes).   We have a total of 6 being made and all the glass has been cut save for the propeller color wheels.   Next week they will add the wires that hold these all together and then, if they want, start their color wheels. 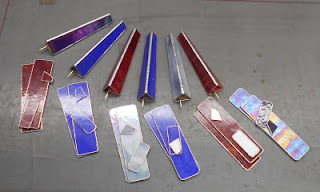 And now we reach the last picture in our post and it's of the pattern that Sheri will be using for her next Window.   She still isn't sure what size it will be but we're going to iron that little detail out when she comes back in.  Hopefully she'll have some glass cut out when she returns.

So there you have it-- another weeks worth of work here in our humble shop way out along the Bayou in Louisiana.