I Used To Be Ripped

Patrice came in last week with a great idea for a Tool Transporter.  It's a Bucketeer tool 'belt' that installs over a 5 gallon bucket.   With this she's got a place for everything and everything in its place. 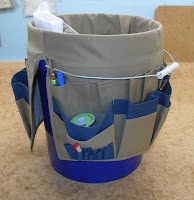 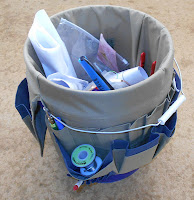 
It's no big surprise that Linda F's Tree Of Life is nothing short of spectacular!   Most impressive of all is the fact that most of this was made from scrap glass that had been building up in Linda's workshop.  The double border, as always, set it all off nicely and also prevented any green leaves from running into the green border that Linda is so fond of.  I love it! 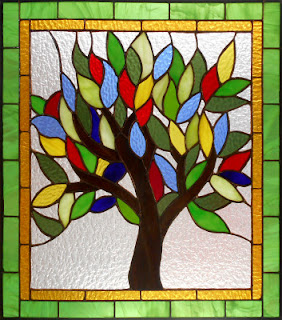 Here's Angie's Mermaid that she started just one week ago.   Pink hair you say?   Yep, this was made especially for someone who I believe has had pink hair in the past.   I know it's definitely been purple at one point in time!   You've gotta love it! 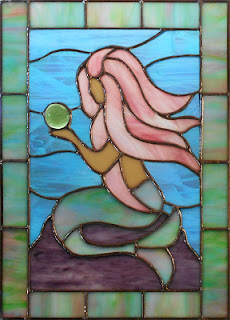 Jeannette's Rose window is certainly beautiful and a definite inspiration as you will see later on along in this post.   Jeannette had not a single problem while making this project quickly and efficiently.  Even her soldering is top notch! Susan D completed her Traditional Kaleidoscope and even made a stand for it.  Below you can see it both on and off of the stand.  As far as Kaleidoscopes go, these are fairly easy to make and they produce a wonderful image. 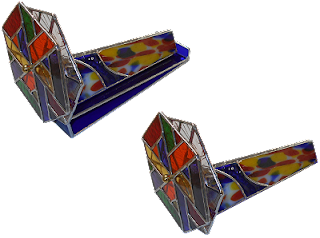 Roy's LSU Tiger Paw Window was completed in record time and every thing about it is top tier.  It's a good thing that Roy enjoyed making this because he now has an order for another of these which he will be working on when we see him again. 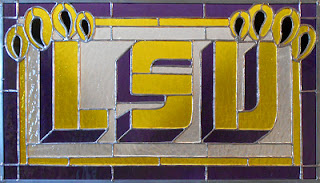 Last week Jan was able to complete her Mary and Child Panel before she called it a night.  Her soldering is getting better and better with each project that she does and I can't wait to see what she tackles next. 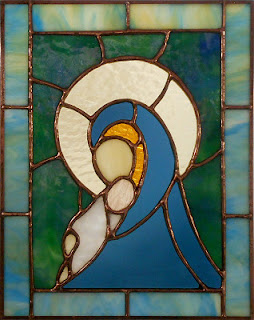 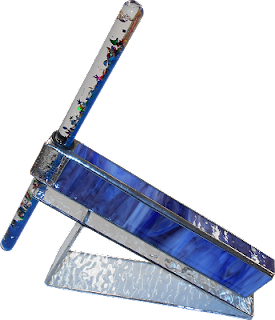 We also saw Betty complete another Mary and Child Suncatcher which is a very popular Suncatcher/Panel indeed.    Looking at her work on this I can see that she now knows what the tough spots are and how to make them look great because I can't find a single flaw in this.

Finally, I've decided to begin posting things that I make here in the weekly blog as well.  On Halloween day I made this between classes as a remembrance to our black cat Beaufy, who wasn't with us on his favorite day of the year-- Halloween.    He certainly turned out nice indeed. 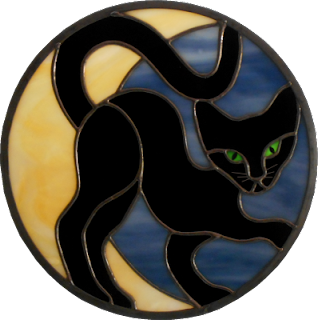 Well now, onto projects that are still in the works.   First up we see Rowena's Louisiana Tiger which is almost completely ground and truly taking shape now.  It is Beautiful with a capital B for sure and I can't wait to see this completed.   I may very well have to make one of these myself because its surely catches your eye. 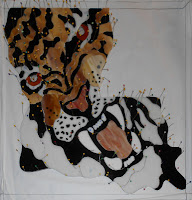 Terry's first half of her Spiraling Flower Window is all ground so she worked on wrapping pieces while she was in class.  When we see her again she'll most likely apply the border to three sides of her window and then get a channel cut.   The second section of this window is surely just about to be started. 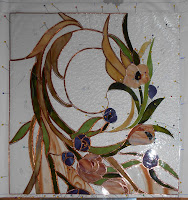 With the center of her Egret Window just about ground, Becky S will be free to begin either wrapping and tacking what she has completed, or moving along to either the top or bottom section of the window.   We'll see what she decides next week!

Patrice learned how to cut out a background using her finished Humming Bird and Morning Glories as actual pattern pieces.   After some quick grinding Patrice spent the remainder of her class wrapping her background pieces.   She's up in the air about borders but I have a few photoshopped images ready for her to look at to help make the decision a little easier. 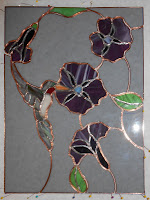 Regardless of what it looks like, Sheri is NOT cutting out a Butterfly Window-- she's cutting out two(!) Butterfly Windows.   What you see below are the colorful pieces that make up the butterfly doubled up.   Once these are tacked together she can then cut out her background glass AFTER cutting it into a perfect circle first. 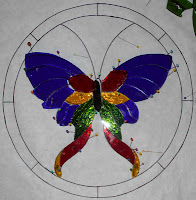 Mary's Santa Window is coming together wonderfully as she was able to get all of her glass cut out this week.   Once that was finished she moved along to the grinder where she started from the bottom up on this traditional Santa Claus.  She's taken this home with her and hopes to get some serious grinding done while we're away for a week.

MiMi's Industrial Fleur De Lis is another window that has completely taken shape now.  With a good deal of her leaded pieces completely wrapped in copper foil she'll be able to  start taking this together if she wants.   Now that she's this far along and she sees how the lead sections work she's no longer dubious about working so far along on her own on this.

And here's another Santa, this one being done by Cindy.   With only a border (or borders) left to attach, I'd say that Cindy is getting close to beginning a new project.  I'm thinking that a green border would look perfect on this, how about you? 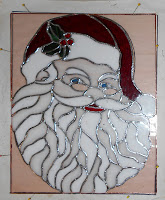 Brenda has her Staff of Hermes Window all squared off and ready for its border which I know she's already cut because she sent me a picture of it.  I've been incorrectly referring to this as a Caduceus but I stand corrected.  At any rate, I have a sneaking suspicion that this will be completed upon Brenda's return. 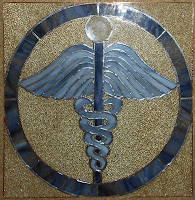 Angie loved Jeannette's Rose Window that she's making one herself.   I know you can't easily see the fact that Angie has all of her background glass cut out and it's all ground already as well.   This will surely be getting a border when we next see it again.

Although Betty has a completed project at the top of this post, she's also working on numbers two and three of her Mary and Child series of large suncatchers.   She's got number 2 almost completely ground already so number three won't be far behind.

Next up we take a look at Tracey's second Cardinal Window.   It's all ground now and only needs to be foiled and tacked before this gets a border attached.  Tracey has re-cut a few pieces along the way on this project because she didn't care for the fit of a few of the pieces.  In my opinion, that is the sign of a true artist.   Anyone who is willing to re-cut pieces of glass shows me that they care about how their project looks.   And Tracey's window already shows just how much she cares. 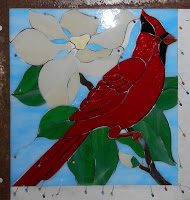 With everything wrapped on her Once Upon A Time Window, Shelley is ready to tack this together and then get the fused face cut out and fitted into place.  Once that's done she'll add a border and then solder away on this delightful window. 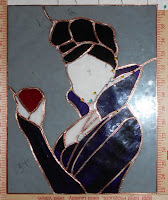 Lastly we look at Susan R's latest window which is a Woman in a Hat (with a flower).  For some reason this reminds me of the Roaring Twenties although I'm not sure if it's supposed to or not.   Whether yea or nay, I know this is going to look wonderful when it's finished.

And this is why Susan's pattern reminds me of the 20's! 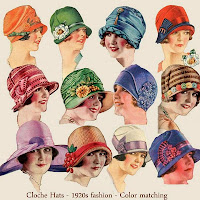 So that brings us up to date.  Look for us again in one week and each week after that because our vacation days have all been used up!  :-(