You'll Never Get Me Lucky Charms!


Chips along the edges of your pieces of glass are a regular occurrence due to the grinder.  The trick is to not allow them to get out of hand.  If you see excessive chipping (bigger than a 16th of an inch) then there is something wrong which absolutely needs to be looked into.  Most times it's one of two issues:

1) Not enough water in your grinder, or

All grinding wheels wear out eventually and excessive chipping is one of the first signs to show that you have a problem.   It could be a lack of water in the grinding tray, a sponge that isn't distributing water onto the grinding wheel because it's clogged with ground glass, or a grinding wheel that has a bald spot.  Examine your grinding wheel and make sure there isn't a patch of diamond bit missing  from it from time to time.   Most times you can flat out HEAR the problem when you are grinding so pay attention and your glass will always grind nice and smoothly.If your grinder uses a sponge don't forget to rinse it out to stop all of that ground glass from 'clogging' it up.

Remember that foil will not always cover chips. 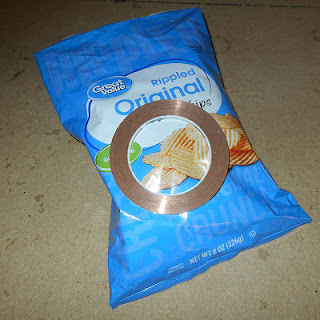 Ok, so MiMi has completed Oakley the Dog!   We've seen a lot of dog windows made over the years (as well as a few cats as well) but this one sort of stands out from the crowd.  Let's face it, it's not every day that you see a dog in a life preserver with snorkel gear on! As always, MiMi has done terrific work on this and we can certainly expect more to come in the weeks and months to follow. 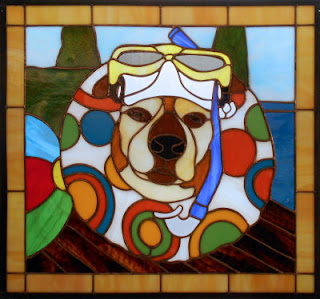 St. Patrick's day may be gone but sure and Begorrah the sentiment still lives on as is plainly evident in Susan D's Leprechaun Window.  Susan is never afraid of going that extra mile when it comes to detail and if you look closely you'll see that there's plenty of little extra's that make this window as fun as it is.   Receiving this window is like finding a pot of gold at the end of a rainbow! 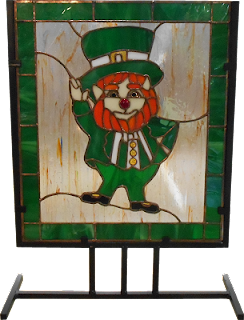 Martha finished her Magnolia Window this week and what quick work she made of it. By now everyone knows how fond I am of a double border and Martha went ahead and put two borders on her project.  I feel it sets off a window beautifully and Martha's Magnolia proves my point. 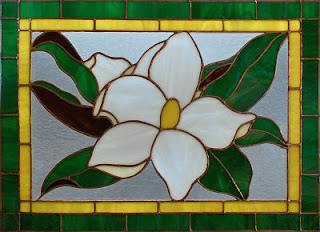 Rowena has been as busy as can be during the past week.  She managed to complete two circular Flower Panels that she's hanging in her back yard on Shepherd's Staffs.  She also put the finishing touches on a Peacock Suncatcher which turned out lovely indeed!! 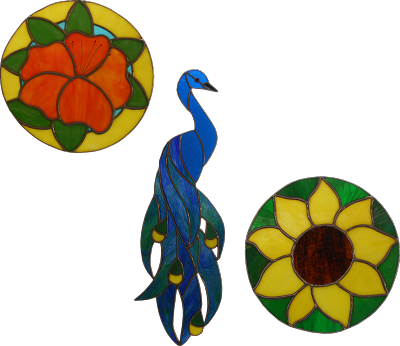 Susan R's Owl Suncatcher got a finished solder bead on it while she was in class and then it was washed, colored, washed yet again, and finally waxed.  The end result is a stunning owl that had a perfect solder job done on it! 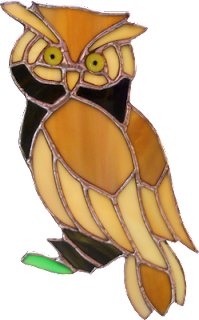 Sheri's first Butterfly was also completed this week and she's got the process for making these down pat now.   Especially the part where you fit the border.   Her window is nice and round and her cutting and fitting is nothing short of perfection. 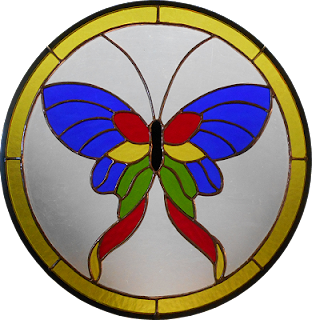 Jeannette has another Easter Rabbit Lawn ornament under her belt.  She's got a few more to make and even though the rest will be suncatchers, you won't be able to tell the difference between any of them from the front side. 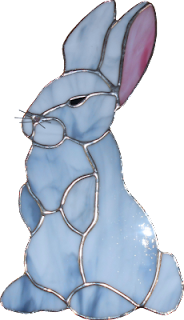 And Tracey got two more 3D Cross Suncatchers  finished.   I'm starting to wonder if she can literally make these in her sleep because she's certainly turning them out quickly enough to HAVE to be working on them while she's sleeping! 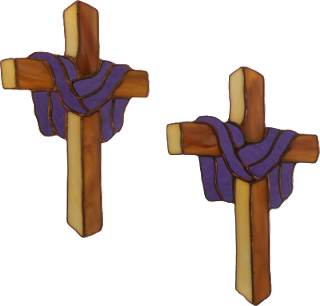 Last week we saw Angie get the background cut out for her Address Window and this week she got all of the glass attached as well as a zinc channel.    She's taken this home with her to work on and she's also supplied me with two more address numbers.   I know what Angie will be making in the weeks to come...

Belinda's Moon/Sun Window has just two weeks worth of glass cutting in on it but she's managed to get ALL of the glass cut out for it in that short time span.   Next week she'll begin grinding and we will show her how to use adjacent pieces of glass to get a perfect fit quickly and efficiently. 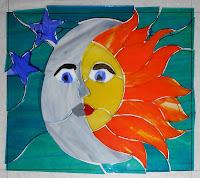 Jeannette isn't only working on Easter Bunnies-- she's got a Corvette in the works as well! She's just one week into this project and she's already begun soldering it! I doubt that this corvette has any chance of keeping up with Jeannette.

Becky B almost has her third border attached to her African Violet Window.  All the pieces have been ground and wrapped which means that Becky will soon begin soldering this.   Before you know it she'll be working on a three eyed fish! 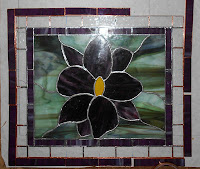 Annette finished cutting out all of the blue background glass for her pair of Cardinals Window and even got some of the red cut out for one of the birds.  We have a glass shipment coming in this week which Annette is waiting for so she can get a second red for the male Cardinal in this window.  We were almost completely out of red glass! 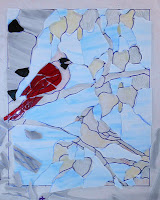 Wow, I have to say that I'm impressed with how quickly Kerry M's  Stylized Bird Window is coming along.   It's actually a cross between a Heron, a Crane, and an Egret which is what art is all about!  All of his glass has been cut and with just two hours of grinding under his belt he's already at about the half way point on this window!

Speaking of impressive-- Here's Mary Grace's Flower Window that she is tearing up!  I have to say that I'm thrilled with the quality of her her work on this especially since she's been working on it completely by herself.

Becky S has the sky cut for her second Heron Window (or is it an Egret?) along with the foliage area along the horizon.  There was a little but of doubt as to what white glass she used for the bird in the first window but then we found the piece of white that she had been using with her name on it in the glass rack  and that settled any doubt about what was previously used.  Nonetheless, the water will be cut next on this.

Linda L is well underway on her LSU Fan Lamp  which she traced out, cut, and almost completely ground in just one class.  Impressive!

The border that Shawn is using on her Flowers Window is nothing short of perfection!  She not only  got it all cut, ground and wrapped-- she also has two of the flower centers worked out as well.  Shawn could very easily start soldering this window upon her return.

Jeanne M finished the grinding stage of her Mary Window and is ready to start foiling!   She's contemplating changing the ground around Mary's feet but we aren't going to make any decisions until this gets tacked together.  That will allow us to see the window on top of other pieces of glass so that Jeanne will be able to easily see what different colors will look like.

Tasha got a refresher course in grinding and learned that the best way to make two pieces of glass fit together is not by following the pattern, but by following the piece of glass that goes next to the one that you are working on.   Tasha is grinding twice as fast now with twice the accuracy!

Rowena says she has a few more Shepherd's Staffs to fill before she's finished making small round windows.   She just isn't sure how many there are herself!   Here's a look an an Iris design that she'll surely have completed next week. 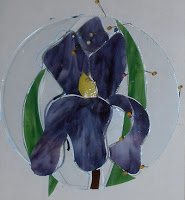 And here we take a look at all of the progress that Jeff has been making on his insert panels.   With two different designs being duplicated it's been hard to tell what kind of progress he's been making but the picture below certainly clears up any confusion that we might have.   Jeff is making progress in leaps and bounds!

With all of her glass cut and a good three quarters of the pieces ground I'd say that Linda F is well under way on her Study Of Rectangles.  I'm unsure if she'll be finishing this before starting her next window or not-- she's already got her next pattern so I will know the answer to this mysterious question when she returns.

Talk about making progress!  Mary's Cross Window is being ground at and incredible rate of speed.  I was worried that things might not be lining up but upon closer inspection I have to say that Mary gets an A+ for her work this week! 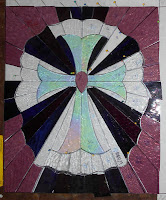 With almost everything ground and fitted together Melissa's Le Pieta Window is just about ready to get some foil added to all of these pieces.  And to think that Melissa was worried about grinding all of those straight lines!   As you can see she's having no problems at all.

Roy's Sugar Cane Window is now officially ground and tacked together!   This week he even got a zinc channel attached which really sturdied things up on this intricate and beautiful design.  With just the final solder bead left to be done on this there's no telling what we'll see when he brings it back in but I can't wait to see!

Our last picture is of Shelley's American Flag Peace Symbol.  There are four pieces that are going to have to be re-cut because the pattern shifted while she was tracing it out which left her with pattern pieces that were way too short to be able to be used.   It's a simple fix but we'll just have to wait until this is tacked since we don't have actual pattern pieces. 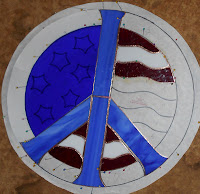 Lastly, Patrice worked on a red, white and blue Fleur De Lis Suncatcher which she almost had completed by the time she left class.  Hopefully I'll remember to get a picture of it when Patrice comes back into class next week.

And that wraps things up this week!