A Series Of Bad Decisions

People always ask me what the most important part is when making stained glass.  Is it the soldering or the wrapping?  The grinding or the tracing of the pattern?  Well, I always change my answer from week to week because it's ALL equally important.  However, if you are looking to make you stained glass creations at a faster pace WITHOUT sacrificing quality then the answer is simple.

Accurate cutting is likely the most important part of making a window because if your cutting is off then no matter how well you do anything else, the window won't look like the pattern.  Also, and most importantly, the time you lose when you slow down to cut your glass is regained three fold when it comes to grinding.  Most people spend hours at the grinder trying to get things to fit together when most of that grinding time could be avoided if they simply took slowed down while cutting and followed the line perfectly.  If you cut accurately you'll be able to grind at an astounding rate of speed because alll you'll have to do is skim your pieces.

Now, onto our finished window of the week.  Belinda's first window turned out wonderfully as you can plainly see for yourself.   Based on a window she painted a few years back, this Sun/Moon design is now an official stained glass window that she cut, ground, wrapped, and soldered on her own.  Beautiful! 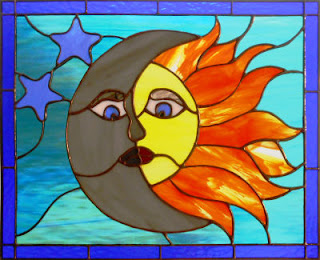 Kerry's Crane Window was also completed this week and it's another example of a newer student's exceptional workmanship.  Kerry has learned quickly that when you take your time cutting out your glass pieces, the rest of the project will go far, far quicker. 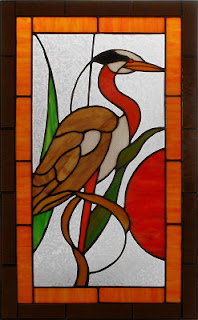 When Cindy asked if I could come up with a Peacock Hand Mirror my mind immediately went to a Swan mirror that I used to make 30 years ago!  After drawing out the basic concept of the swan I was able to change the face, beak and feathers until we got the pattern you see below.   The design may essentially be mine, but all of the work was done by Cindy.  And what great work it is!  I suspect that we might be seeing more of these in the future. 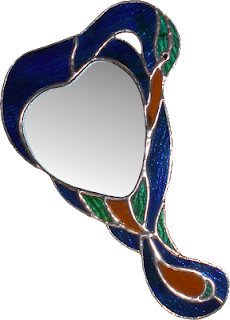 When Linda F told me that she wanted to make a University of Kentucky Logo Window I warned her that it would be intensive but she didn't shy away at all.   When she looked at the pattern about three weeks ago she simply said, "Thanks," and went to work on it.   In record time she was able to knock this out with a high degree of perfection!  Her straight lines never waver and that is the key to making this window look as great as it does. Wow! 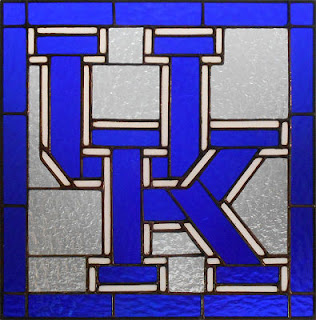 Betty's latest Suncatcher is a Beveled Flower that features 3D leaves which actually reside on top of the the bevels on the left and right side of this piece.  Made quickly and practically effortlessly, Betty showed this project just who the boss is! 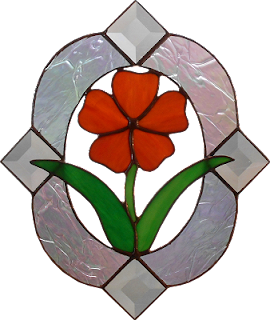 Carol's Ladybug Lawn Ornament turned out to be very vibrant indeed when in the sunlight.   I only have the flash from the camera on it in the picture below but even that reveals how rich and deep the red glass is.   And the green/blue leaf also shines brilliantly in the sunlight as well. 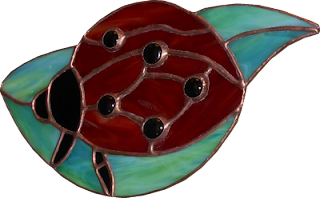 Cindy also made a University of Louisiana Suncatcher this week. When Cindy is on a roll, she's on a roll! 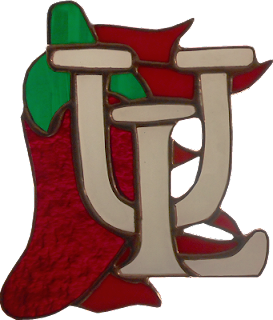 Here's another Circular Butterfly that Sheri finished this week.   The colors have all been changed making this stand out from each of the other two that she completed previously.  I think she has this pattern down pat now! 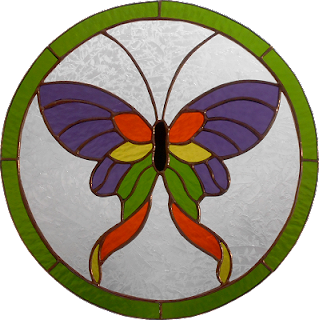 MiMi's made a Dress Suncatcher that I think is phenomenal.   It may only consist of one piece of glass but it's the wire work that really makes this so eye catching.  And yes, that hanger started out as a straight piece of 14 gauge wire (with the straps being made from thinner wire).   Pure elegance!

As I predicted, Jeannette's Initial 'G' Window was completed this week.  When all she had to do was solder it so I knew that there was no doubt that she's finish this and start something new this week.  You'll read about the new project a little further along in this post. 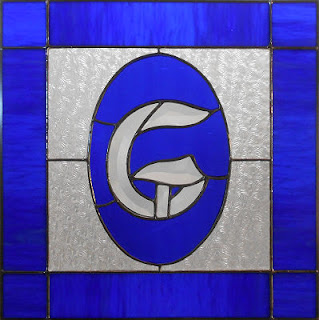 Carol started working on her version of the Lady In The Rain and practically finished it in just one week!   She added the border to this when she came in and then got most of the front side soldered as well.   This will surely be completed upon her return! 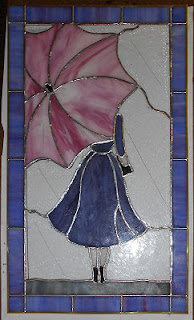 As you may already know, MiMi is working on a Seafood Window but this one will showcase a feature that we've never seen done before in one of these-- a newsprint background!  Next week I'll go over the steps involved in making her background glass but for now just marvel at that incredible sheet of glass below her project.  I guess we'll call it Newsprint. 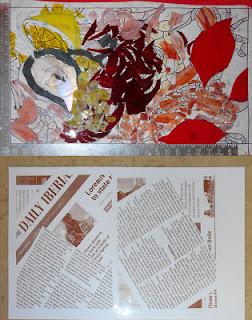 I'm going to have to start calling Tracey our 'Cardinal Student' due to all of the Cardinal Windows that she makes!   What I love most about her projects is the fact that she always looks for new designs rather than making the same window.   This allows her to grow as an artist by not falling into a repetitious pattern. 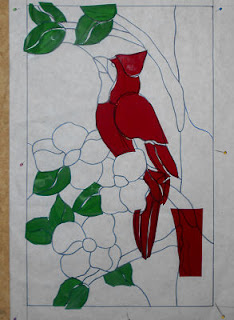 As you can tell by her EXCELLENT use of pins, Martha has very nearly completed the grinding stage of her Tulip Window.   Someone already has their eye on this pattern and in all honestly I don't think that Martha will be needing it much longer because she's made incredible progress on this in a very short time. 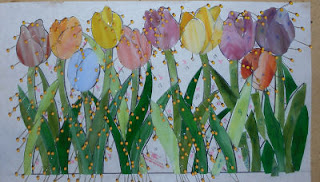 This week Shelley learned how a zinc channel can be curved to fit a round window and both she and Mary Grace were quite impressed with how it's done.   Now, with the front side of her Peace/American Flag Window soldered Shelley is about to turn it over and take this window home (literally)! 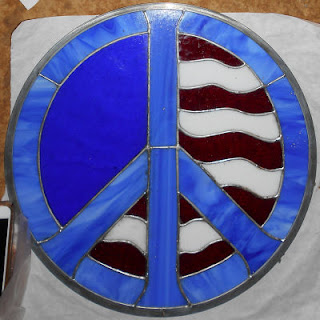 Next up we have another window that is very near completion.  Melissa's Le Pieta is stunning indeed and the front side is almost completely soldered now.   Since parts of this have been tacked together for some time, Melissa had to re-melt the solder that held her pieces together so an even solder bead could then be applied.   The second side will go quicker since she'll just be able to start soldering. 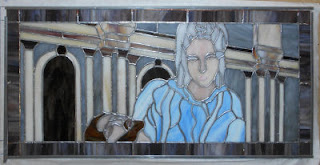 Last week Pumpkin Mickey got his background glass cut out and this week, after it was all tacked together, Linda L cut out her border and got it ground and attached.   This is going to need a zinc channel bent and attached when Linda comes back in and she also got to see how it was done on Shelley's window this week. 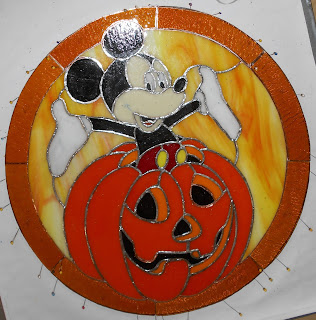 I've heard that The Song Remains The Same but that doesn't mean the numbers do!   Here's Angie's third Address Window all ready for its pair of borders.   The colors are very different this time around but the glass she used for the numbers have more than enough contrast to stand out against the rich green glass that they rest upon.  There's no doubt that this window will get a 'Whole Lotta Love'! 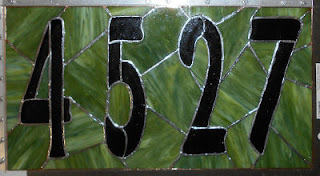 Mary Grace is wrapping away on her Flower Window.  Sadly I didn't get a picture of it this week and it's just too late to go out and get one now.   Still, this is her window and there are more pieces wrapped than you see in the picture.  Expect a more up to date picture upon our return in a week.

As I said above, Jeannette was able to work on another window this week and look how quickly she's making progress on this new version of her Corvette Window!   She is wasting no time at all on this and the quality is every bit as great as the last one that she made. 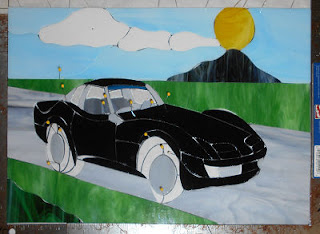 We have two more Cardinals here and this is the pair that Annette is making.   She's about at the halfway point in her grinding of her very first window with us and as I've said before, I think she may be doubting aspects of this window but once the grinding is completed I think the bigger picture will truly come into focus for her.   As more and more comes into shape it's becoming clear that this is going to be lovely indeed. 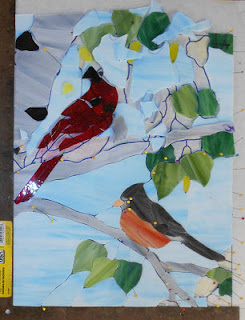 Mary tacked together her Cross Window and then filled in the few missing pieces that either didn't fit well or broke along the way.  There were a total of five missing pieces and as you can see they have all been replaced already.   That isn't all she did though-- if you look very closely you can see that she has the first of two borders cut and ground.  She's begun wrapping them and the final darker border will go on when she returns. 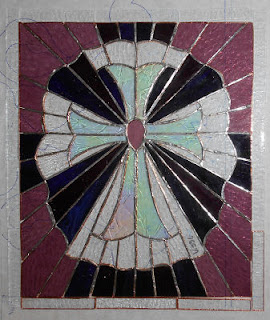 Becky S is busy grinding away on her second Egret Window.  If it wasn't so big you'd see more of what she accomplished and this picture has taught me to focus only on the work she's done rather than the entire window.   In other words, even though it's hard to see in this picture, Becky's window is moving along at a nice rate of speed.

Jeanne's Virgin Mary is tacked together and the first of three borders has been attached.  The remaining pieces along the right hand side will be used to make separators to divide the center border.  It may not make sense now but you'll understand when you see it next week.   Jeanne decided to go with a church style border for this and she's getting what she wants! 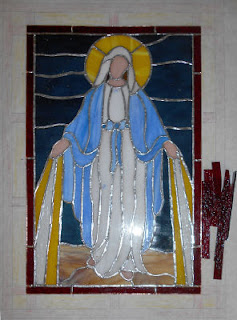 Linda F is about to start work on this cute Children With Umbrellas Window.   She's got her pattern pieces traced out onto glass and is officially ready to begin cutting! 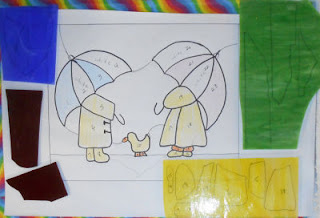 And this is the latest Cross Suncatcher that Cindy has begun working on.  She may only have nine pieces cut out at this point in time but there are only eight pieces left to go which means that she's already beyond the halfway point! 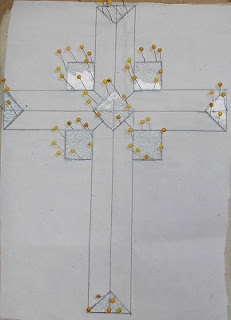 Lastly we have a look at Susan D's Window.  It looks like my aim may have been off a bit with the camera though because I can't quite see anything!!! 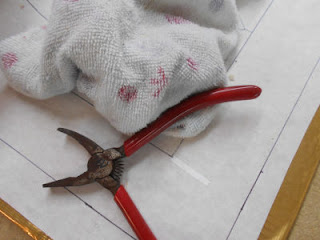 And that about wraps things up this week!