A Process of Annihilation

Just because a piece of glass fits into position, well that doesn't necessarily mean that it's correct.  As I always say, you can fit a square peg in a round hole if the peg is small enough.  The piece should ALWAYS match the shape of the opening it fits within.  If the piece is too small and you're comfortable with that, at least make it match the opening it will reside in.

Below we see a piece that fits into place but is actually too small.  Me, I'd re-cut it but sometimes you can't.  Perhaps you're out of that color.   If you have to use the piece grind it so that it matches the shape you are trying to fill.  The center piece below has curves and wavers along what are supposed to be six straight edges.  Even though it will make the piece smaller you need to straighten those six sides.   That will ensure that the thicker lead line will look like the shape you need. 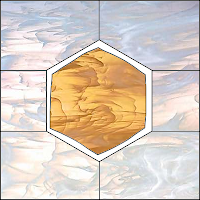 SO with that out of the way let's look at MiMi's Ducks Unlimited Window which is perfection.  She can always be counted on to deliver 110% in both effort and attention to detail.   I touched up about 5 solder joints but that was just nitpicking. MiMi is donating this to an auction this week and I'm sure that anyone who looks at it can appreciate the time and effort that went into it. 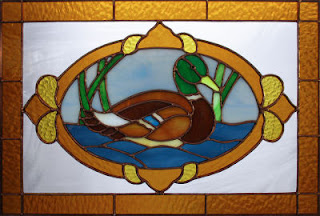 Shawn finished her Autumn Leaves Window and the end result really impressed me.   Shawn may be new at this but you certainly can't tell that by looking at this beautiful, vibrantly colored window.  Her foiling and her soldering really jumped up a couple of notches while she worked on this.

Kerry put the finishing touches on his Tractor Window by completing the soldering on the back side.   Once that was done we looked it over, applied some hooks and then Kerry washed, colored and hung up his most ambitious project yet.  All that detail paid off in the finish piece, don't you think? 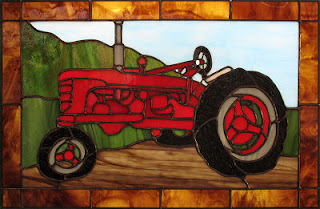 Jeanne L finished her second Beveled Cross sun catcher this week and now she's gearing up to begin a Fruit Bowl Window which I know she'll enjoy making.   She's already picking out glass so the fever is high for her to begin something new upon her return. 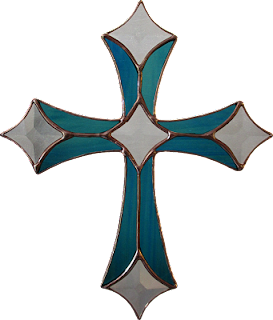 Then there's Carol who started and completed these two Jewel Hangers in less than one class.   Once they were completed she called it a day so she could get home and decide what she wants to make next! 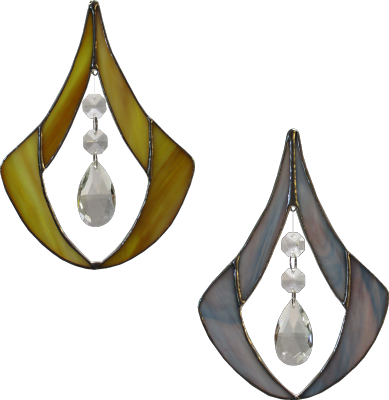 Susan D made another Jewel hanger of her own and I really like the jewel that she put in this one.  It's the first of its kind. 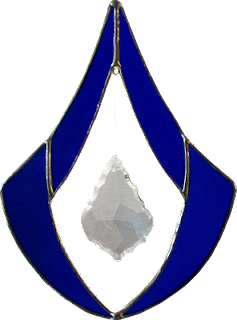 Belinda is taking on the advanced trait of being able to work on two windows at once!  She's modified her Cat/Wine Bottle window (as shown on the left)  so that the cats are officially Wine Bottles now.   I love the attention to detail she's done with the wine glass--  Rather than making it all clear she's made it transparent by using similar colors to the background so you can 'see' throughthe glass. 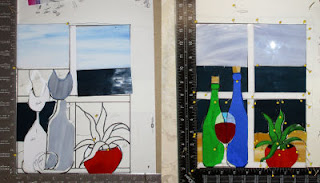 Susan R has the majority of her Seafood window cut out (although there's still the matter of a Tabasco Bottle and some corn) and will begin working on her background glass soon.  She says she wants to start grinding this so we may see her working at the grinder first. 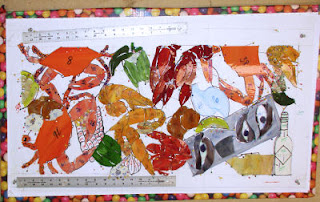 Annette's making major headway into her rendition of the Grinch.  I love the colors-- they alone tell the viewer what the subject matter is in this window.  Now that she's grinding the Grinch will become easier and easier to see with each freshly ground piece. 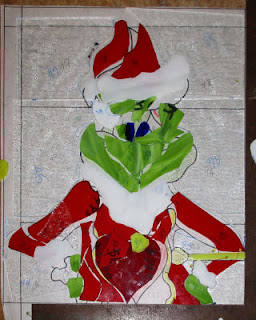 Rose is making unbelievable strides with her Flower Window as it is all tacked together now.   This week she was also able to cut, grind, wrap, and tack a border into place and then begin soldering it as well.  Look to see this completed upon her return. 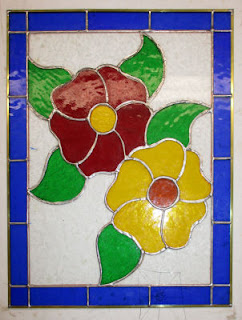 Susan D got her reindeer all ground and he's ready to foiled and finished.  She's making a series of these and will put them on stakes which will then decorate her front yard.  I do believe that his will be the only one with a red nose though. 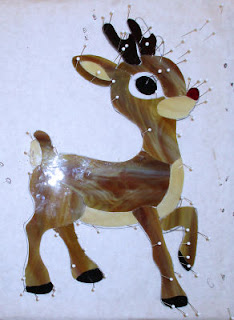 With the top of her Wedding Box assembled and soldered, Cindy was able to move along to making the box bottom.  The glass has been cut and ground so this will be finished next week after we get the hinge attached. 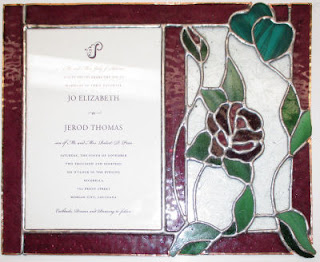 Jeanne M was going to use purple for the border on her Cross/Treble Clef Window but when she set the glass next to her window everyone agreed that it was just to dark.  In the end she settled on a pink border and I think it's the perfect choice.  Once she attached the border she began soldering it which means that this may very well be completed when she returns. 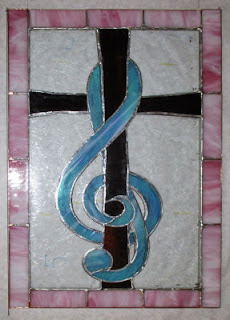 Jeff has the bottom right of the third section of his large Flower Scene Window all tacked together and is ready to start on the cutting out the top leaves and sky.   Once that's done he can begin joining all three panels together by filling in the connecting pieces. 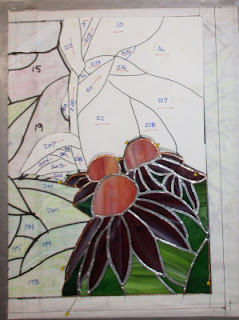 Jeannette tacked together the left side of her large Transom Window and then began grinding the right side of it.   She got all of it fitting together but then put all of the pieces into a box before I got a picture of it.    She's moving through this large window quickly and she's learned that sometimes you have to alter things during the creation process to make up for short comings that you just didn't plan on before starting. 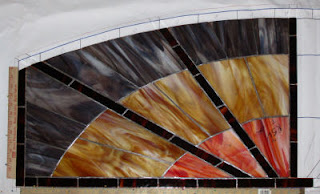 Melissa's Train Suncatcher  is really coming together now and her reach for perfection shows clearly in her work.   I can't wait until she sees how the metal wheels are done because I think it's going to really excite her to do something so differently. 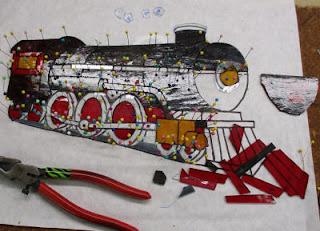 Angie's Nativity scene is big, bold, and wonderful.   She's done a stellar job on this and decided that with this much work involved, a single border would undersell the window.  So after picking a heavily textured clear class for an inner border she then went with the same brown that she used in the manger itself to frame it all off.   By the time she left class her borders where attached and Angie can now flip this over and finish her window off! 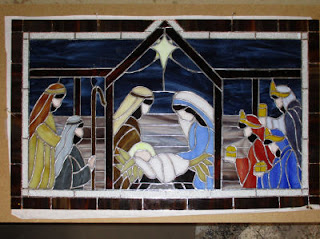 This week we also got to see Barbara wrap the final border for her Fleur De Lis Transom Window then get it attached along with some brass channel. She's soldered the front side and I'm sure the back side won't take long at all.  Before you know it she'll be working on something new. 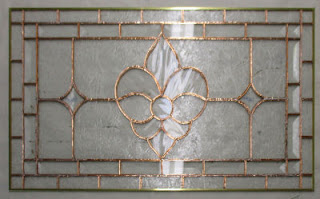 Becky S got the front of her Egret Window all soldered save for the final border which isn't soldered only because she spent most of her night cutting, grinding and wrapping that final border.   She did get it attached and that means that we'll be seeing the back side of this when she returns.

Linda F got all of her LSU window ground after she tacked the center diagonal strip together. With the lion's share of the work done on this it won't be long until this is completed and as you can see, it's looking GREAT already! 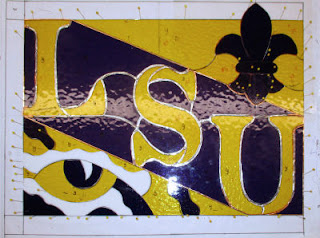 Mary has her borders finished and has moved on to the soldering stage of her Heron Window.   When she got the second border attached everyone (including myself) was surprised at just how big this window actually is.   Sometimes the addition of a 3/4 inch border makes all the difference in the world.   This is a very impressive window indeed. 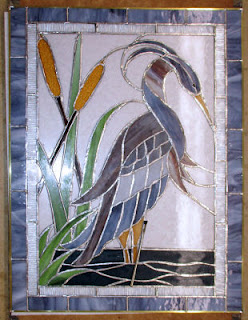 Rowena wasn't technically in class this week but she did drop by to pick out a border for the Santa Window that she's been working on at home.   It looks great and hopefully we'll see Rowena back in class next week.  I love the border! 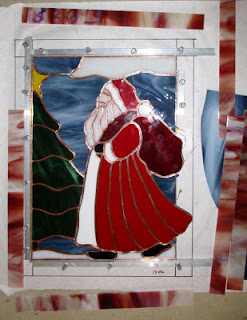 Mary Grace finished wrapping her Louisiana Rifle/Arrow Window and the tacked it all together.   I think I heard her mention a double border and we'll see what develops there when she returns. 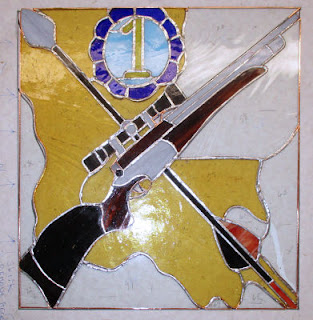 Our second Grinch of the week belongs to Tracey and it is almost is almost finished now that she got her multicolored border attached.  With the face lines already painted and fired on this just needs solder to finish it off, and Tracey's an expert at soldering. 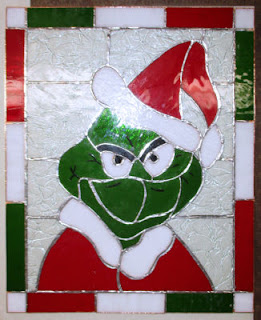 Betty's almost got another Sunflower under her belt.  She's made so many of these that as she ground her pieces she had to transfer them onto a fresh (unwrinkled) copy of the pattern. 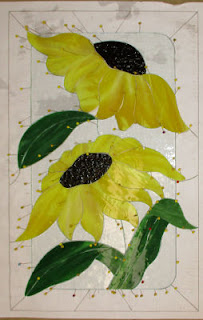 And that brings us all up to date again!