With Covid-19 looming large all around us we've decided that since we're a hub where 30 people gather weekly from as far away as Lafayette to Houma, we'd best play it safe and shut down for a bit.  Our current plans are to re-open the first week of May but this is subject to change depending on the uncertainty of what the nation is doing.  Rest assured, all of our students will be notified when they can come back in for their 'therapy' sessions and you know what?  By then I'll most likely be needing therapy as well!

So, although we announced our closing last week we did have a class on Tuesday night for the people who said they needed to get things finished before abandoning their project for over a month.    Here's what happened in that small, hectic class.

First off, Lisa completed her Owl Window and let me tell you that for a first project, this looks phenomenal!   She was more or less coerced (for lack of a better word) into putting a double border on it but I think she agrees that they really set the entire window off.   What's not to love about this? 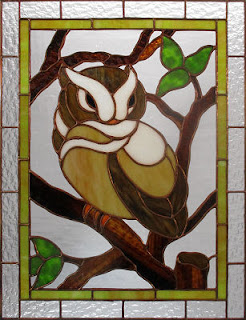 MiMi put the finishing touches on the wooden frame for her stained glass Victorian Flower panel and sometimes the cover does help to make the book!  Its simplicity is what makes this all so charming.  Well, that and the fact that her straight lines are perfection and line up without any waver at all. 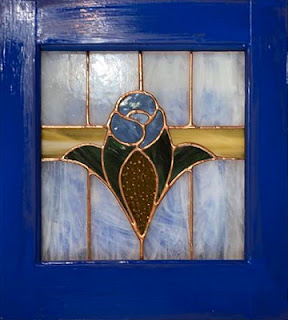 This Wedding Invitation Plaque only needed some channel around it to finish it off and that's exactly what happened this past week. Exquisitely crafted by Jeannette, this is a wedding gift that will most likely get her a few orders later on down the line for a similar present.   What other wedding gift could be more thoughtful or personal? 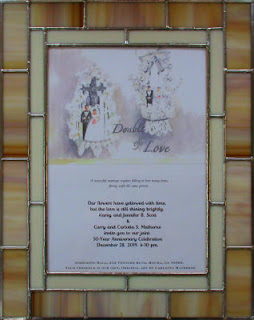 And just to round things out I put these together using assorted scraps of blues, yellows and browns.   Aside from the pattern itself no two are alike and it helps prove that colors may not need be stressed over as much as some people stress about them because as different as these are, they each look marvelous to me! But then again, I made them so there's that... 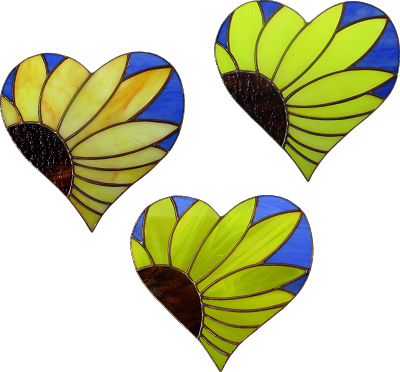 Now Martha's Franklin Streetlights Window is really looking good now that she's grinding her pieces.  She's focusing on the streetlight first and then she'll grind the background to fit the subject matter.   You know what?  That will be a tip of the week when we get things back to normal. 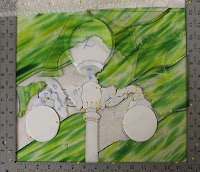 And Tracey managed to get most of her large Mary Window cut out so that she can grind while she's at home trying to remain 6 feet away from people. You know, I accidentally called Tracey by the wrong name while she was in class-- I had called her Mary, who she normally drives to class with, and I thought I was losing it for a minute but I just now realized that I was probably looking at her window when I said the name Mary.   Interesting.  Nonetheless, this is going to look great when she completes it!

Up next we take a look at two of Cindy's Rooster Panels.   Although the glass is different between the two windows the pattern is identical, not mirror images.  So why are they mirror images in the picture below?  Because she was already soldering the back side of one of them!  Russ talked to Cindy today and all she needs to do is get hooks on them and they're finished.

Here we look at the Bathtub Lady that Belinda is working on.   She's began to cut out her paper pattern and then after much searching she came up with two different (but similar) pieces of white glass to cut the tub out of.   I always like to add a hint of realism by making the top edge of the tub just ever so slightly different from the rest of the tub.  It's hard to see now but when it's lit up it will give it some subtle pizazz! 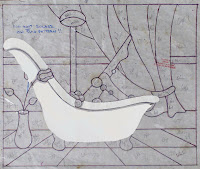 Lastly, Melissa picked out glass for her Ribbon T Cross design and got a lot of it cut out before leaving for the night (month?).  I forgot to snap a picture but I quickly colored in her pattern so you can see an approximation of what it will look like.   When you only have 13 pieces that's an easy photoshop job.

Well, I know that this will be the last post we make for a while.   I'll be making things in the shop so maybe from time to time I'll post my progress on whatever I do.  Until then, everyone please remain safe, secure, and virus free.