Hurricane Laura certainly screwed things up for us but thankfully we got no damage at all even though we expected 2 to 3 feet of water from her.   We spent two days taking all the glass out of the building and making shelves across the tables so we could lift everything 3 feet off of the floor.  It was stressful and it was hard work but that was nothing compared to returning everything to the shop which took a good 5 days.  So even though we cancelled classes last week we're ready to start things up again and get back to our regular schedule.

How is it that we have projects pictured for this post?  Well, these were done the week before Laura made landfall- I've just been too busy to get this posted!

So first up we have Roxane's Angel all cleaned up and looking spectacular.  Her border color matches the trim of the angel's robe which makes it a perfect choice.   There are a lot of pieces in this, some being downright microscopic, but Roxane made it all look easy as she put this together quickly and efficiently. How can you not love it? 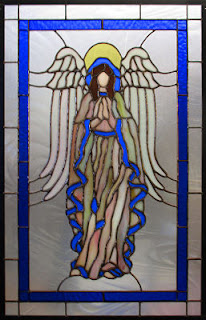 Mary Grace put the finishing touches on her Praying Hands Window which came out to be a bit larger than life.   Three borders will always make a window bigger than you'd initially think but that just makes this all the more inspirational because Mary Grace's work on this was wonderful. 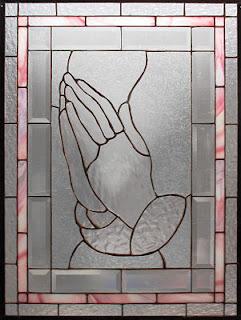 Beth's first window was completed and I have to say that her work was impressive.   It may have been slow going at first (as it always is) but by the time she was finishing this up she was moving along at a nice steady pace and with a good deal of confidence in herself.  They say that confidence can move mountains and although I can't attest to that fact I can say that it helps you make windows that look as good as Beth's Cardinal! 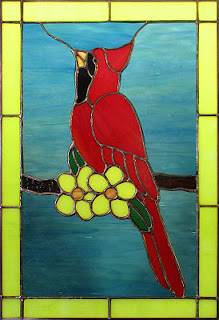 Here's a shot of Susan D's latest large Outdoor Lawn Ornament sent to me from her phone.  The spiraling copper that holds it all together is nothing short or elegant.  Her 'wire' work is spectacular and if I'm lucky she may just teach me how to do it! 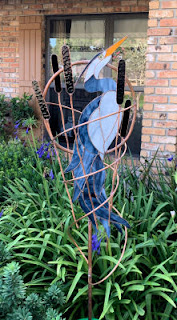 Linda F wanted to make a Mardi Gras Mask Panel for her Lawn Sign Post and this is what she came up with.  Not bad at all!  Her work improves with every window that she makes and I don't even have to touch up her soldering anymore.  Here's to another job VERY well done. 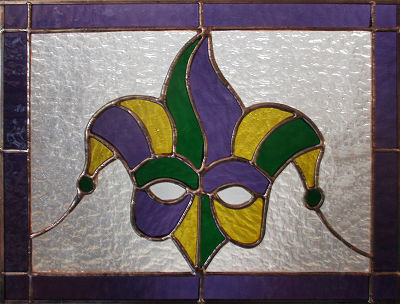 Helen started making this cross at home during the week and then brought it in for some soldering tips and for me to critique it.  There's not much to critique other than for my saying that she did a great job all on her own with this.   Some of those cuts get pretty thin but Helen managed them like a pro. 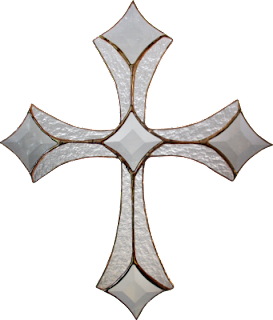 Susan R put together a third 3D Bird Ornament and I think she has these down to a science now.  She's added a cut along the birds belly where it sits on the leaf to give the solder a spot to anchor to which makes this far stronger than the ones you see on the internet.  And hers are prettier as well! 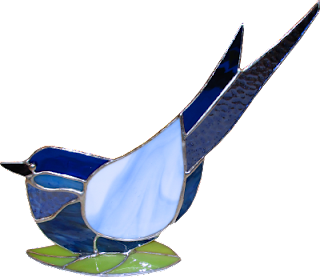 Tracey's rendition of the Modern Cross uses only 2 colors -- a light grey and a steel blue.  I took this picture in direct sunlight so the colors look much lighter than they actually are.  It's not often Tracey's projects get sunlight behind them since she's a night student!   No matter how dark or light it is, it's gorgeous. 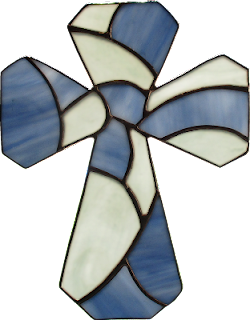 Betty was as busy as a bee this week as she wrapped up a Sunflower heart, a Christmas Ornament, and a triangular Santa Face complete with a wire mustache that she bent and attached all by herself.  Betty is proof positive that if you are determined to do something and you don't give up, it WILL get done. 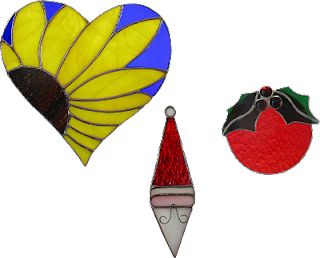 As promised, here's a better look at Cindy's Geometric Window.   Now that more glass has been cut you can really get a feel for what this is going to look like when it's complete.  Actually, I believe that I have this sideways (resting on its side) but I'll figure out how it actually hangs next week and then I'll post the next picture in the correct orientation in our next blog. 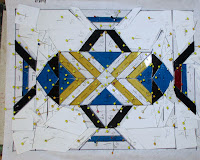 With everything but the borders tacked into place, Jeanne L is ready to pick border colors and finish up her glass cutting on this beautiful piece.  I know she plans on using a clear outer border but the inner border is still being decided upon.

Angie's Pumpkin Window is the talk of all our classes, especially when they see how big it actually is.  Yes, it really does fill a table and it's really even more impressive than the picture here would have you believe.

Roxane not only finished her Angel Window but began work on cutting out a Nativity Window as well.  As you can see she's well underway and what you see below was done in just one class.  At this rate she's going to need to start thinking about her next project! 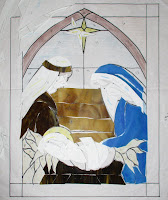 Linda L resumed work on her Treescape Window and with only the water and some small pieces of sky left to fill in it won't be long before she starts grinding these for a perfect fit.  I understand that there may be a problem with the sky and a large broken piece but we're going to see what we can do when Linda comes back in. 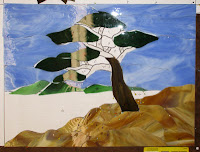 Melissa's moving quickly and now has all of the background glass ground for her Four Fleur De Lis' Window.  The actual Fleur De Lis' have yet to be cut into position--  currently they are just resting on  top the glass they will be cut into.  First she's going to wrap everything but the four clear diamonds that the FDLs will be cut into and tack the rest of the pieces together because we don't want things to grow and twist out of position while she's wrapping them. 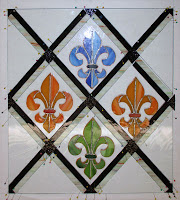 What you see here is Sheri's Fractured Rose Window ready for its two final pieces.  Once they are cut and ground (a 15 minute job) she'll be able to begin soldering this truly unique window.  If it looks broken, well, that's the point of it! 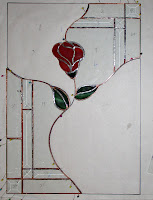 These are four Fleur De Lis' that Ann is making to insert into her own version of the Four Fleur De Lis Window.   She's got everything ground and will begin wrapping these when she comes back in.  After that she'll work out the background the same way that Melissa is working on hers.. 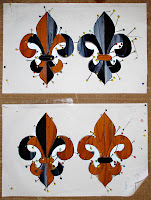 Jan's Flowery Poodle Window is very close to being completely ground.  The face will take a little time due to the detail and the complexity of the flower that is set within the poodle's profile, but I can honestly say that this is coming together beautifully.  Next week we'll see far more detail as the final pieces are ground. 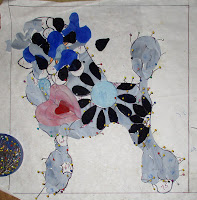 Lara's background glass showed up just before she walked into class so she was able to cut out the final pieces of her Leaf Window and then even manage to get it all ground as well.  Her border glass was also delivered so there will be no hold ups on this window from here on out.

Mary busily worked on foiling all of the pieces that make up her Round Magnolia Window and even though it was ground with room to spare she is still finding the need to re-grind pieces here and there to help ease up on the tightness that is occurring as she wraps her pieces.  We like a nice even fit in our windows be we also need to leave room for two pieces of foil to slide in between each piece of glass.  It may not sound like much but it sure adds up quickly. 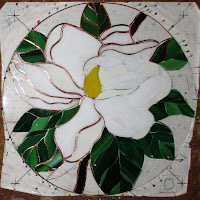 MiMi's Combat Vet Window is all ground now save for the lettering the banners across the top.  There are some difficult cuts here but MiMi is taking her time and following her patterns lines perfectly.  She's practically a machine! 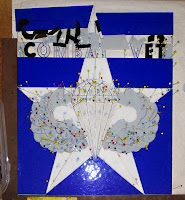 Susan D has her Heron all cut and ground but it's still basically white on white and hard to see.  It looks fantastic though which should always be expected when you look at one of Susan's pieces.   I have no doubt that when this is finished it's going to look stunning.

Mario has been completely ground and now Shawn is ready to spend a relaxing evening foiling all of her pieces.   When she does that you'll easily see the definition in Mario's gloves which are hard to see now, sort of like with Mary's Magnolia Window.  Those lead lines are very important because they help 'flesh' out the gloves and bring them to life. 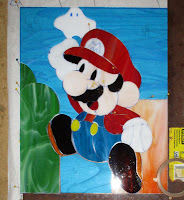 Shelley's Address Window is all ground and is already being foiled.  With just a few pieces left to go I know that we'll be adding a border to this when we next see her.  I've told her to bring in all of her colorful scraps because she wants this border to really stand out.

When Belinda came in she asked if it was possible to make her Church Window about 12 inches taller than originally planned.   After a little consideration we added 6 inches to the top of the sky and 6 inches to the bottom grass to arrive at the perfect height.  After that we got her border cut and now she's ready to fill in the last three pieces.  the lettering has been fired onto the 3 pieces that make up the scroll and she only needs to cut them into place when she comes back in.And then to finish it all off a cross will be added to the top peak of the church.  We'll see that happen soon, I promise you.

Susan R started cutting this Sunflower Heart after finishing her 3D Bird Ornament  and by the time class ended everything was cut out and ready to be ground.  Not bad at all! 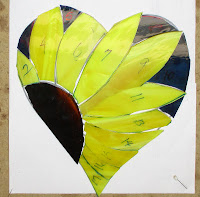 and to end things up here, Linda F also worked on two Mixed Drink Suncatchers -or will they be Lawn Ornaments?  All I know for sure is that the one on the left is a Caribbean Sunrise and the one on the right is a Blue Hawaiian. 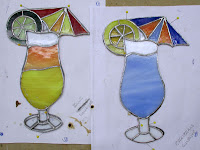 And that's all she wrote.  Classes resume tomorrow and we can't wait to see everyone!