Our tip this week is short and simple.  When using pliers to break your glass be gentle.   Running pliers should have the adjustment screw set so that they expend the barest amount of pressure on the glass.  Yes, they WILL work if you adjust them too tight but you can't get complex cut out using them that way.  Also, Breaker/Grozier Pliers are meant to be an extension of your fingers allowing you to hold onto your glass where your fingers can't.  You don't squeeze Breaker/Grozier Pliers-- you twist them downward.  If you hear crunching when using these pliers you are squeezing them and therefore using them incorrectly.  Remember, it's glass you are working with not mortar.

So first up we have a look at Cindy's pair of Beveled Transom Inserts which she completed in just one week.  Just because she got the work done quickly doesn't mean that her work came up short in any way as you can clearly see for yourself.  Bevels surrounded by glue chip glass lead are possibly the best contrasting clears that you can use. 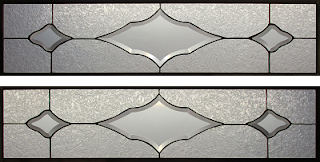 Here's Betty's Santa Clause all finished with a freshly cut mustache.   She had used a different white when we saw this last week but it stood out from the rest of his hair so much that Betty wisely decided to re-cut it from the same glass that she used for the rest of his hair.  It would have been fine but the focus would have been the stark white mustache.  Now the focus is on good ol' Santa! 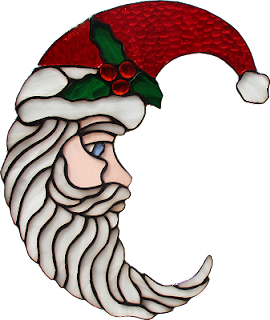 Mary Grace put the finishing touches on her Address Window and liked it so much that she's making two more (with different numbers of course).  One of them is completely cut out already but I never got a picture of it most likely because Hurricane Delta was weighing on my mind.   At any rate, we'll see her second one when she comes back in next week.

I never got a picture of Susan R's owl last week and didn't even realize it was missing until she mentioned it in class to me.  This week I made sure I got a picture because it's all cut and ground save for the whites (or whatever color Susan plans to use) of the owls eyes.  This is one cute Owl, that's for sure. 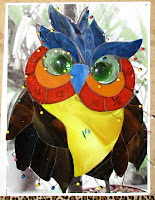 Susan D had the paper pattern to her Geometric Classic Flower Design traced and cut out last week but this week she managed to get all of the glass cut as well.  She even had time to start grinding but she decided to wrap it up early to prepare for the onslaught of Delta.   But just look at how great a job she did with her cutting -- this hasn't even been ground yet! 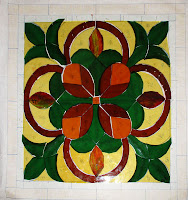 Sheri's Koi Window is coming along just swimmingly!  She only has a few flowers and the water left to cut out so it won't be long now.  She's still undecided on the water but I know whatever she picks will do justice to this beautiful design.

Martha spend her night grinding the smaller pieces of the piling in her Pelican Window so she could secure the pieces and turn them into one large piece.  Things are looking good here and her grinding is perfection.

Well, it's official.  All of the glass has been cut for Linda F's Pumpkin Cornucopia Window.  This week she cut, ground, wrapped and tacked together the background pieces after which she worked on her first pale orange border.  After getting that tacked into place she cut her final root beer border and then called it a night.  She'll surely be soldering this when she comes back in.

Cheryl attached the final border to her Franklin Street Light Window and then sat down and soldered the front side of it.  Once that was done she flipped it over and worked on soldering the back side which means that this could very well be completed when she returns. 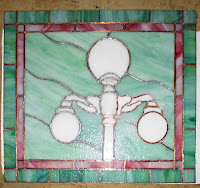 Beth B spent her night being as busy as can be by tracing out her Address Window and getting it all cut out.  There's a grinder involved in the next step of the creation of this window.  Her blue numbers on that stark white background make this an address that no one will miss.

Bee ground the bottom two birds of her Circular Birds on a Branch Suncatcher and when I say they fit together like a glove I might possibly be understating just how perfectly she's working here.   She is right on the line and leaving just enough space for foil.  Surely this will be another feather in her stained glass cap.

It's hard to see just what these are right now but after the wire work is completed Betty will have Octet of Santa's with gold hats.   More on this when she comes back in and you can better see the design. 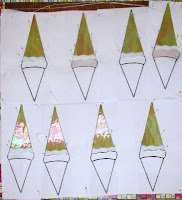 Hurricane Delta made this a short week as we had to cancel half of our classes so we could pack up the shop (yet again) in case we got water.  Luckily we didn't get any and on Saturday afternoon (after taking a brief nap after staying up most of the night) we began reconstructing Bayou Salé GlassWorks.  On Saturday night things were looking messy but pretty good.  On Sunday night the place looked as though it were pretty much back to normal save for there being no glass in the racks.  Glass went back into the shop on Monday before noon.  That means we're back in actions and ready for a full week of classes so drop on by again next week to see a post with considerably more work showcased.