Talking About Janice ( And Grace)

Rumors abound if you miss your regular night. I, personally, wouldn't say anything but the rest of the class begins speculating and that's when dirt comes out! Of course I'm only kidding-- only nice things were said when Janice and Grace were MIA on Tuesday Night.

And speaking of Grace, look at what she finished during class this week. All she had to do was attach the four corners and solder this so we knew she'd be taking it home with her. Wait until the sunlight hits this window... 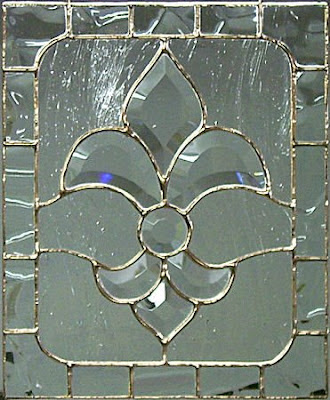 Ellen hasn't been wasting any time while she's at home. I got this picture from her the other day along with an email that said that many a time she almost drove to Bayou Sale for me to help her, but in the end she persevered on her own and succeeded. I can't find any fault with this and I must say that I'm very pleased that Ellen was able to tackle a project like this all on her own. 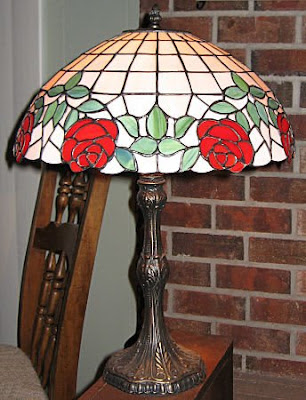 Which brings us to Janice. She and Grace managed to sneak quietly into the shop without my even knowing they were here! At around 6:15 my phone rang and they wonder 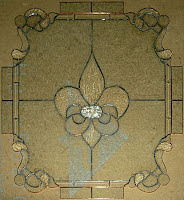 ed if we were having class or not! My ears and my eyes must be going because I never heard them pull in and I kept looking out the window expecting to see their car in the driveway, but I never saw or heard anything. I hate getting old!

Once we were all in the shop Janice got her edge bevels cut to match the curves of her fancy corners and then she made two passes to wrap them. Once all the bevels were tacked into place we made the final measurements and cut the straight sections of her final border. Next week she'll begin the final process of filling in the corner sections.

Gerald came in and immediately began tracing out his Tiger Stripe Window. Grinding each piece as he cut it he quickly had it all together. I know I planned on helping him wrap his glass but he had it all wrapped before I could get to him. The next thing I knew he was tacking it together and then he washed it, colored it and finished it all in one night! I'm going to guess that we'll see another window finished next week and then the last one will follow in 2 weeks. This job is halfway done now with only 2 windows left to go. 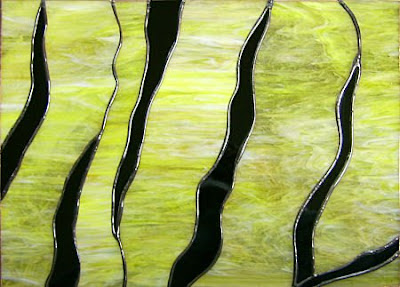 Fran finished not one but TWO Fleur De Lis Windows this week after she added the brass channel to them and then hit them with a finial soldering job. The one on the left has a Black Baroque border while the one on the right is finished in a Green Rough Rolled Glass. Fran planned on doing some Beveled Stars next but at the end of the class she decided to finish off two more Fleur De Lis Windows while she's on a roll here. I think she has different border colors picked out and I'm sure she wants to try a different color finish on the lead when her next two are completed. 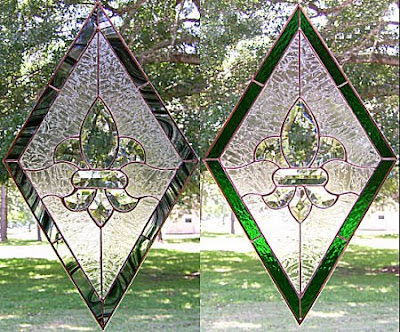 Mary Lynn came in with all the glass she had cut the previous week all ground and wrapped. It's 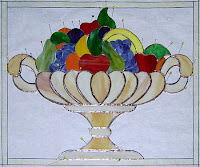 amazing how fast you can work when you have a grinder at home! :-) This week she cut out the pieces of fruit (including the dreaded grapes) that she didn't get to the week before and then she re-ground a piece or two in order to get her bowl to fit within the border on her pattern. She picked out the blue glass she'll be using for her inner border and I think she'll have it cut next week since there are only 6 pieces of glass in her background. It won't be long before Mary Lynn has to decide what she'll be making next. 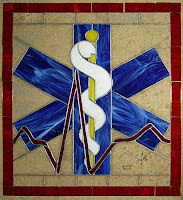 Grace not only finished her Beveled Window but she also returned to work on her much larger "EKG/Medical" Window. The red Spectrum glass she had picked for her border came in 3 days before she arrived for class and she cut it up, sized it and then managed to get it all wrapped before the class ended (which I didn't realize until the next day). With all the soldering in the center section completed on both the front and the back side, I'd say that there's a good chance that Grace will be taking this home with her next week. Rmember that the background glass she's using is clear and that the tan coloration you see in the picture is actually the table-top showing through the clear sections of her window.

When we last saw Barbara she had her pattern traced out and ready to go. She

took it home with her along with a lot of the glass she had picked with the intent of getting a lot of work done at home. This week we got see see the fruits of her labor. She said she thinks her cutting has improved and I'll say that it most certainly has. She was doing fine before but I can tell just by looking at her work that she is more confident with both the cutting and grinding processes. When she left this week she had everything but the background cut and ground. She'll be wrapping her pieces at home and then we'll cut her background out next week. The tough part is just about over!

Cheryl cut all of the blue "Wind" pieces to her win 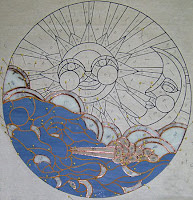 dow and then spent some quality time with the grinder getting it to all fit together. Her pieces are ground just right-- not tight but not too lose. This means that when she foils them at home during the week the window won't grow beyond its intended size. It's important to allow room for the foil because even though it's not very thick you will have upwards of 20 pieces of it in a given horizontal or vertical line on a window of this complexity. Grinding not only involves getting all your pieces to fit together but also consists of knowing how much space to leave for the foil to fill in. I've lightly traced out each of the blue pieces that Cheryl cut out to allow you to see the pattern of the glass easier.


Lea was in this week and we pretty much ironed out her next project which will be even larger than her last window. She'll be making inserts for 2 French doors that she has in her home. They won't be extremely fancy but will incorporate clear glass and possibly a few bevels which will definitely leand them a very elegant look. Bevels and clear glass always get a lot of respect in the stained glass world. Also, next week Jane will be back and we'll get to see her working on a large Trellis/Golden Trumpet window for her kitchen. Be sure to come back and see what's happening next week here on our weekly Blog.