Grace has another Fleur De Lis under her belt. She makes these in record time and her workmanship has really gone beyond that of a student. She's confident in each of the steps and works quickly yet neatly. I think this picture says a lot about her work. 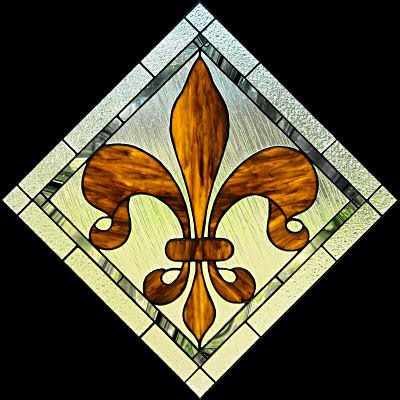 Julie came in and started wrapping the remaining pieces of her first Iris Window. Now that it's all wrapped and fitting together it's ready for solder. We had a little scare wondering where the smallest pieces ended up but after a few minutes of hunting they showed up right where they should be- in her box of equipment. She'll begin tacking this nearly 3 foot high window during her next class-- And once it's tacked together she'll begin her soldering!

Patty came in and ground her last 2 Fleur De Lis'. After they were wrapped and tacked together she laid them out on top of her clear granite background glass, traced around them and then cut her background. Everything fit so perfectly it only took her a few minutes to grind the pieces. She's taken them home to wrap so I'll bet she starts soldering this window during her next class after she gets her border attached.

Speaking of borders, Roxie got her final border cut, ground and wrapped, and then she got her four corners cut. She's tacked it all together and we slapped on some channel around the edges just before we called it a night. That means that this frame will be completed during her next class without any doubt. Wait until you see how perfectly the glass matches the picture... 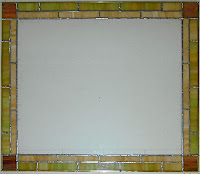 Janice tacked together the center piece for her next window and then she set upon getting her background cut out. She's got 90% of it together so I expect that she'll have the rest of the background completed when we see her again. She's an old pro at this pattern. :-) 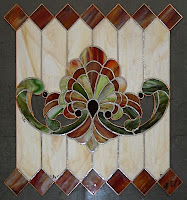 And that about wraps it up for this week. We'll see a few more completed projects during our next update so come back again.