Patty made quick work of her last Fleur De Lis suncatcher this week and then I discovered that I screwed up and never got her pattern ready for her next project. :-( She and Grace will be working on the same designs and I had told myself that I wouldn't need the pattern until the following week since Grace is away on vacation and Patty is working on her Fleur De Lis. It never dawned on me that Patty's Fleur De Lis was going to be finished within the first hour of class. There goes the idea that I'm perfect. :-) 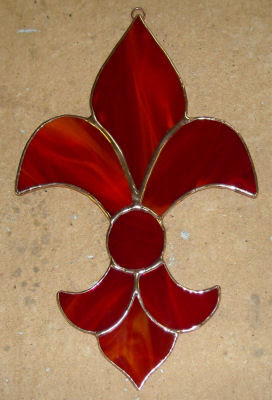 Suzie wasted no time in getting her background and inner border cut for her Fleur De Lis window. Once the background was cut she ground it, wrapped it and then tacked it together. Since her corners are cut are 45 degree angles she needs to be very careful with the placement of her border or the points won't line up at all. So far it's looking perfect to me... 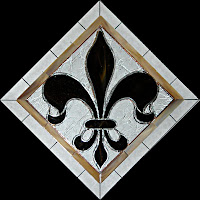 Shira picked this fancy Fleur De Lis window pattern and I have to say that her work during her the class really impressed me. Not only did she cut out all of her Fleur De Lis but she managed to grind it all before leaving for the night! And it's perfect. 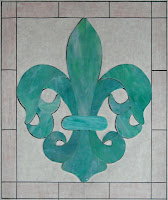 Rita is all set here! She tacked her frog together and then worked on the yellow border that surrounds her window. She even got the front side of her window soldered together which means that she'll be taking it home next week since there's only one side left to complete. 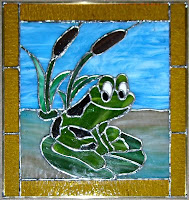 Monique picked an interesting fish window pattern for her first project. It's a pattern that really comes alive if the proper glasses are selected. And by 'proper' I mean the correct colors and textures. A simple blue background would make this look boring but her choices really draw your eye to this window. Next week she'll cut the fish and the remaining rocks on the bottom of her window.

Lisa spent the night at the grinder and got all of her center design ground. There was a lot of pieces to be ground but her cutting was very good so the job went quickly. She's taken the pieces home with her to wrap and next week she'll be cutting the background glass. 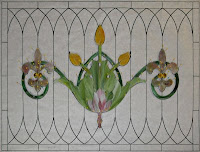 Lisa cut the background for her second window and tacked both of her windows together so she could add her inner border. She's got one cut out and wrapped and the other will be at the same point as this one very shortly. 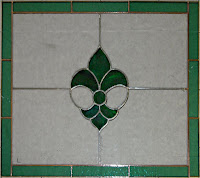 Look at Bonnie go! She's only into her first week of cutting and she alreadt has all of the darker white and the green cut for her Magnolia window. She's doing great and even managed to cut off the lines while she's cutting. This means that her pieces are fitting together almost perfectly and she won't be spending a lot of time at the grinder later on. 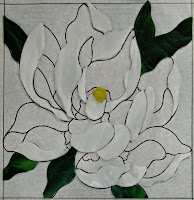 Jane is out of her butterfly mode and back into making lamps. She misplaced a few pieces that will inevitably turn up after she recuts them. She's got 2 of the 7 sections together and here they are (1 on top of the other). I love the green/pink glass she's using. 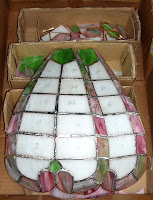