A Blood Offering Was Made (Multiple Times)

Here it is, Terry's completed window! Terry was originally going to cut the white background glass in just 12 pieces but in the end we both decided that discretion would be the better part of valor so we cut the longer top and bottom pieces in half to avoid a possible unseemly break. And as you can see from the finished window, it didn't hurt the design a single bit. I love Terry's choice of colors in this.

Cheryl came in and visited with the girls on Thursday night while she finished up her stained glass Boxes. When they were completed both Roxie and Patty were quite impressed with the results. Boxes are a great quick project and they're more than just decorative-- they're handy to have around. You can't see the etched imaged in the bevels so I'll tell you that the one on the left has a butterfly and some flowers while the one on the right has a small verse that says, "For there is no friend like a sister, in calm or stormy weather". But if you read the Blog last week, you already know that. :-)

And Ceil has completed her first window. This will go in her class room where it will help block out the sunlight that comes pouring through in a blinding way just about every day. The colors are bright and since the glass is all solid it will block the sunlight while lighting up beautifully. Ceil will be starting another project next week for yet another window in her classroom. 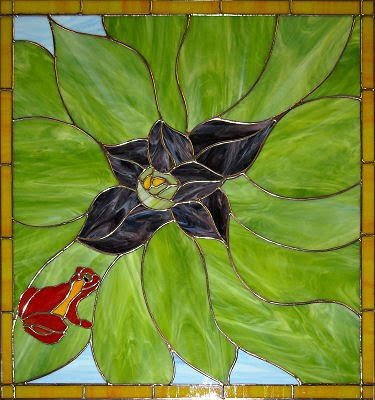 We had two new students this week and we'll start off here by introducing everyone to Pat who made a yellow and orange butterfly. Though he's never done anything in stained glass before he had no problems at all cutting the glass (or doing any of the other steps). I'm not sure what he'll be doing next but I believe he'll have no problem tackling anything that he wants to. 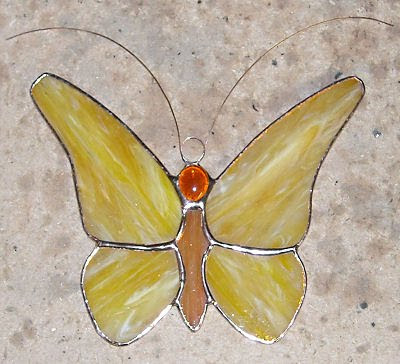 Also joining us this week was Ray who decided to make his butterfly a blue one. Like Pat he had no issues at all with any of the steps in making stained glass. Both Ray and Pat understood the need to have curves that flow gracefully (rather than choppily) from one point to the next. And when the glass didn't cut exactly the way they wanted they simply fixed it at the grinder. This is another job well done. I like the design that Ray has picked out for his first window-- I think it's going to be very colorful and fun to make. 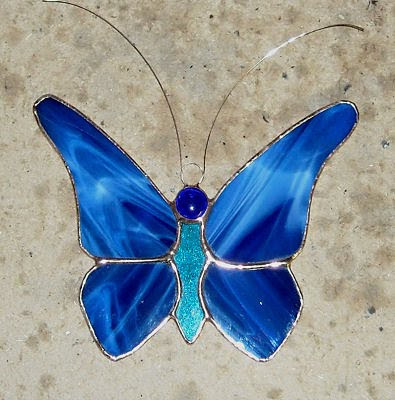 Roxie has finished cutting out her Woman in a Bathtub window and then moved over to the grinder where she now has the lower third of her window all fitted together. This should be ready to be wrapped next week. She wants it finished in time for Christmas and I know it will be. 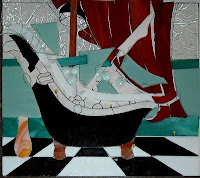 Patty is working on a Shrimp De Lis window. The glass is the perfect color and Patty has all the hard stuff cut out and ready to go. She said she'll be doing some hard time at the grinder next week but I don't think that it's going to take her nearly as long to grind as she might suspect. There is still wire work to do after it's all soldered together and that wire will really set this off and let you know without a doubt that you are looking at four shrimp that form a Fleur De Lis. 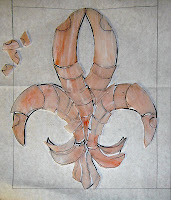 Grace and Janice made BIG strides towards completing this French Quarter window. It's all ground and pretty much completely wrapped at this point. Grace has taken it home with her to finish wrapping and when it comes back in it should be tacked together as well. I guess soldering is the next step for this as well as adding the sign and the Fleur De Lis flag in the upper right corner of the window. 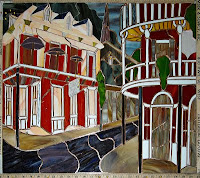 Fran has her duck pattern all set to go. It's been changed from the last time we looked at it so take a good look at it now before it gets covered in glass. :-) She's picked out some great colors for this project and I'm sure it's going to be a beautiful window when it's completed. 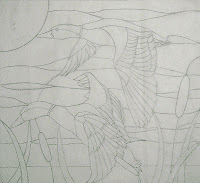 Myrt is making a Sun/Moon window and has the left section (the Moon) almost all cut out. I must confess that I've always liked these windows and can't wait to see how this one turns out. I won't be surprised if she finished cutting all her pieces in her next class and then we'll really get a good feel for how this window will look when it's finished. I love her choice of glass for the night sky.

Anita is another one who is moving at near light speed on her window. If I'm not mistaken this is her second week on this project and she's already got her Panda window all cut out. Not only that-- she's started grinding it as well. Anita really has the hang of this so I doubt that it will take much longer for her to finish this window and get to work on her third project. She had taken her green leaves home so she could cut them there and I have to say that she did a GREAT job! 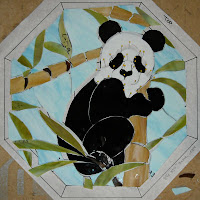 Well, we certainly had our share of completed projects this week. When classes started on Tuesday night I was expecting only 1 finished window and here we are just a few days later with 2 panels that have walked out of the shop to be hung in their respective windows along with 2 boxes and 2 butterflies.

Paul was also here this week but he opted to watch his 2 friends work through their first lesson. Just wait until you see what he plans on making next. I love it when someone does something that's never been done in class before.