Well this project is a first. No one has made a dragon before so Patty figured that it was about time someone did something about that. Here we see her Dragon's Pewter Body with the stained glass wings she made for it. It's similar to the fairies that Patty and Roxie made but maybe a bit more masculine. The wings are our own design because we didn't have a pattern. And thanks to Russ we even attached them to the body correctly! I think that Patty found this to be a quick (only 1 class to make from start to finish) and fun project. I just wish I could remember what it was Patty wanted to work on next- I guess I'll have to call her to find out because my mind is obviously not what it used to be. 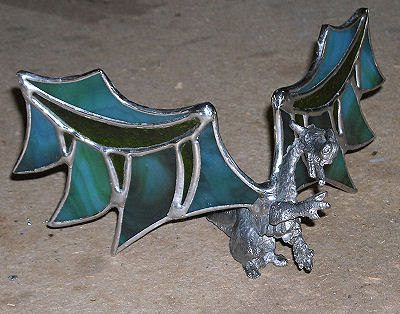 Myrt completed her Fleur De Lis window this week. During the week I took the liberty of washing and coloring it for her, not so much because I'm a nice guy (but we all know that I am!) but because I wanted a nice finished picture of the window. Somehow I think the picture would have come out nicely no matter what because this is a job well done. Good going Myrt! 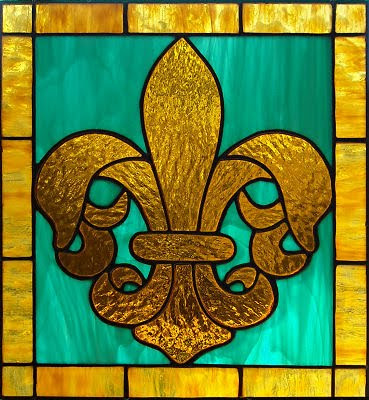 And the last of our completed windows this week is one done by Cheryl. The "Hay, Lady!" is completed and out the door. I have to say that the colors and the design match the logo perfectly and I don't think a better job could have been done. We had to paint the face on but even that worked out well in the end. 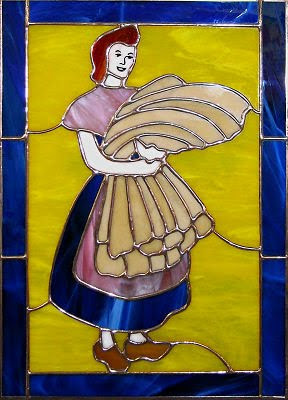 And Cheryl doesn't waste any time when she shows up in class. Before she left she had the tops to 2 boxes pretty much completed. You can't see it in the picture but each of the bevels are etched. One says, "For there is no friend like a sister, in calm or stormy weather" and the other has a picture of a rose etched into the glass. It looks like she'll be working on the box bottoms during her next class.

Trecia has again made huge strides towards finishing her window. With the borders all tacked and the brass channel in place around the window on she began soldering this and has completed her first side. There's no doubt in my mind that this will be finished during class this Wednesday. I can't wait to hang this up and get a look at it off of the table. Clear projects tend to disappear in the pictures I take until they are held up with light behind them.

Terry's window is very similar in size to Trecia's and it's moving along just as quickly. She'll be soldering the front side of this when she comes in this week so expect to see this one completed soon. You can't really see how well the colors compliment each other without a light behind this but take my word, it looks great!

Fran came back to class and started working on a duck window but I forgot to take a picture of the pattern before she left. She'll actually be cutting out glass during her next class so I'll get a better picture then. This is the sketch of the ducks in her window-- we added some grass and a cat tail near the bottom to it to liven it up a bit. 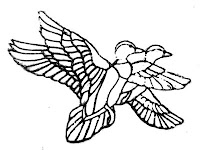 Roxie is doing a very interesting window-- it's a woman in a bathtub! She's altered the pattern a bit so rather than cutting out extremely tiny round bubbles from glass she'll be using round globs for the bubbles. It's going to make the window easier to make and I think the depth and roundness of the globs will really work well. Here's what she accomplished during her first night working on this. And don't you love the glass in her flower pot? (I picked that!) 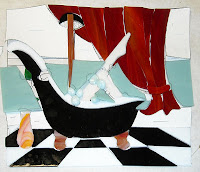 Jane's lamp is almost complete now. She has 3 sections tacked together with just 2 more to go (if my memory serves me well). At any rate, she's beyond the halfway point as you can see in the picture below. Just look at how nice and even her gridwork is. there's nothing to complain about in this lamp, that's for sure. 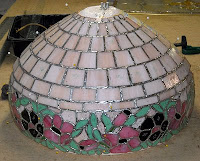 Grace and Janice went to work grinding this window and it's almost completely ground now. I'm going to have to do a rough count of the number of pieces that are in this window. Only the upper left corner remains to be ground but Grace thinks she's going to replace the glass that she used in the shutters with another color. We'll see what it looks like when it's all fitted together. 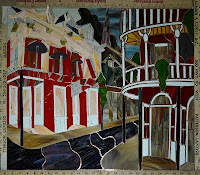 Ceil has her border on her flower and she's taken it home with her to see if it's going to fit in the opening that she made it if for. It's tough enough making a window fit an opening when it's 'square' but the opening that this goes in is a bit off kilter. We think it's correct but before the channel is completely soldered onto the window we want to test the size to make sure nothing drastic has to be done to get it to fit. Ceil will be soldering the back side of this and both sides of her frog that will be tacked onto this window when it's completed. 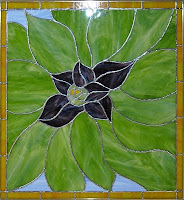 And last of all we have a look at Anita's latest window-- a Panda. This will actually be a sister window to the panel that Ceil is making. Both will be installed in Ceil's classroom at Glencoe Charter. With the toughest cuts out of the way the rest of this window should go fairly easy for Anita. And she's even taken some of the leaves home with her to cut out there during the week! That about wraps it up here this week. Come back next week to see what happened during our next set of classes and meet 2 new students.