It's a Pinkish-Brown. It's Prown!

Bonnie came back in and picked up some more supplies this week. She brought along some sun catchers that she and her husband have been working on at home and they're looking very nice. She's managed to come up with 2 new variations of Fleur De Lis' that I haven't seen before. The Crawfish version and the Breast Cancer Ribbon. I've made a few of the Ribbons over the years but have yet to see a Fleur De Lis ribbon until Bonnie showed up with it. And then less than a week later I saw it on someones shirt while I was in town. Go figure. Bonnie is doing excellent work at home. 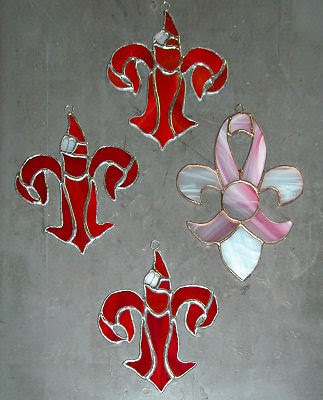 Myrt has all of her background sky cut out for her Flower Window. She'll cut the sun by cutting 1 round piece of glass and then trace the ground, wrapped and tacked flowers into it so the grain of the sun will all flow perfectly. This way it won't look 'cut up' and will really give a look and feel of one sun rather than a series of cut up pieces of glass. It takes a little more time to do it this way but the end result is worth the extra 15 or 20 minutes.

Anita has been busy as can be while she's been at home, and I'm not talking about housework! Look at all the fish that she has managed to complete during the time in between classes. She's doing a great job here and pretty soon there will just be background left to cut out. She really wanted to take the background glass home with her but it was such a large piece that we convinced her that it would be best to cut that here during class. If something happened to the glass on the trip back and forth it may take a while to get another sheet in.

Fran was in this week and look at that-- her ducks are really starting to look like ducks! She's got the top one almost completely ground and some of the bottom one completed as well. Once these are tacked together she'll redraw the background so that the sun is rising rather than already being up in the sky. Once the ducks are completed the rest of this window will be a piece of cake. 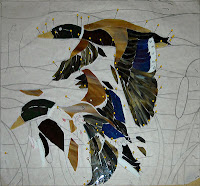 Terry's Mardi Gras Mask Window is just about completed. The title of the Blog comes from the color of Terry's Background glass which Myrt christened 'Prown'. I see more of a pale purple bordering on pink myself, but it's one of those colors that practically defies description because you can see so much in it. Besides, I like the name Prown. So anyway, all of Terry's glass is cut and wrapped so she'll be able to start soldering this next week. 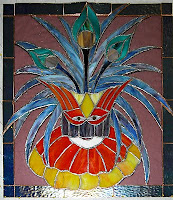 That pretty much sums it up for this past set of classes. Hopefully we'll see you all again next week when we continue to work on our windows.