You Mean That's NOT an Identifying Number?

The weather was still awfully cold this week but not nearly cold enough to close things down which means that we had more students make the trek down to the bayou to resume their classes. (Bayou Salé GlassWorks is not just an interesting name- it actually exists behind a bayou.) Some of our students were anxious because they were finishing projects and others were just glad to get out and have some fun.

Terry was one of those people with a project that was nearly completed. She had soldered the back side of her window at home and brought it in for me to do some touch ups on it before she colored it and called it finished. Her soldering was good on the front side but I must say that her lines were even better on the back of her window. She's really getting the hang of the soldering process. After I smoothed over a few rough spots we gave this window a bath and then colored the lead and waxed it to a shine. It looks great, doesn't it? Very colorful much like Mardi Gras is supposed to be. That's a great job Terry! 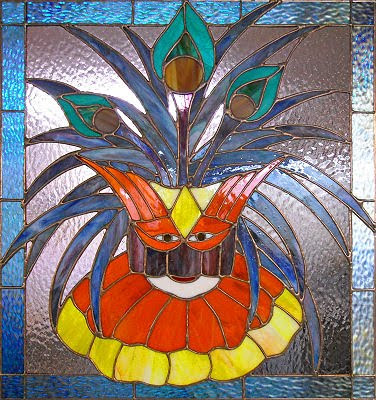 Jane was anxious to start this birdhouse whose pattern came from a small Votive candle holder that she brought in a few weeks ago. We started off by doubling the size but that was too big and in the end what you see below is just 25% larger than the original. And it's the perfect size. We've decided to make 1 or 2 adjustments on the next one (the first first project in any series is always the 'Guinna Pig' so to speak) but in all honesty I can't find any flaws in this design. When it was finished I fell in love with it and copied the pattern in case anyone else wants to make one. What impressed me the most was that Jane not only started this project on Wednesday but she finished it before class was over. She really knows her stuff. 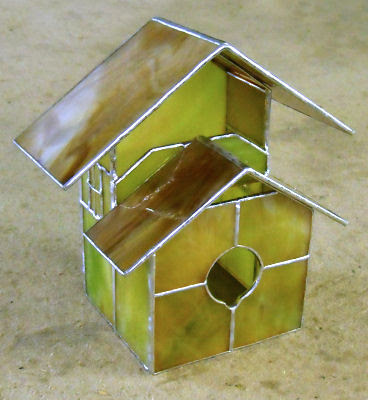 Anita has 98% of her window all cut out and has moved on to the grinding stage of this project. We had lost a few pattern pieces which explains why only 98% of the window is cut out but that isn't going to slow Anita down. It's far easier to just leave a few holes in the window and then fill them after this is tacked together rather than trying to redraw a pattern piece and end up with something that doesn't quite fit right. Anita has taken this home so she can get a head start on grinding. With the toughest part behind her I think she'll find this window is going to become easy work from here on out. And just wait until it's finished and she gets a look at it with some light behind it. She's going to be amazed at how nice this looks.

While Anita was cutting a sandy sea bottom Myrt was busy cutting out the pieces to her butterfly. Once that was finished she moved on to grinding her window. I set up a square on the upper right of the window to make sure the window has perfect 90 degree corners and when I returned a little while later I was very impressed at how perfectly she had ground her flowers where the sun will be placed later. Her grinding is impeccable to say the least. I really like the way this is shaping up for her.

Patty was going to work on an address sign for her front porch but she needed a gift and decided to do a variation on our standard cross pattern that's so popular. But she wanted to give it a little extra something rather than follow the standard pattern. A while back I had sketched out a version of the cross that added concave curves to one side of each of the arms on the cross which gave it a less symmetrical look. I never got around to making one myself but when Patty saw the design change she decided that was what she wanted to do. She also added some quarter circles between the arms to 'round it out' so to speak. By the end of the night she was finished soldering the front side and will just have to do the back when she returns next week. 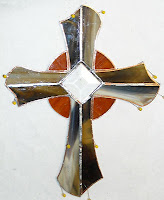 Paul was in again and got the bottom panel cut for his terrarium. It's all tacked together and now he can place it on its side without having it collapse into a flat pile of glass on the table. Once he had it on its side Paul began soldering the outside lines and then took it home to see what he could get accomplished there during the week. This is really coming together now. 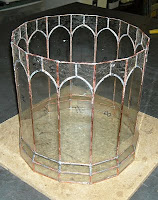 Roxie has cut and ground the background to her address window. She's taken the pieces home with her to wrap so next week this will be all together and she'll be headed towards the finish line once she starts soldering. Her fancy corners were a little extra work but they're well worth the effort. She's still unsure of the color that her final border will be but once this is tacked together she'll have a better feel for what colors will work and which ones won't work on this window.

And to bring this to a close we're going to leave you all with a first glance at what will soon be Julie's Stained Glass Quilt window. It will consist of nine 9" x 9" quilt squares made out of stained glass. Once all the squared are assembled she'll cut some border glass to go between each of the squares. This Quilt won't keep her warm during those cold nights but it will warm her heart when she gets to see it completed and hanging up. One of the paper squares (the one that's missing from the picture) is cut up and ready to be traced onto glass. Julie worked on picking out all of the glass that she'll be using to give the overall window a consistency that wouldn't exist if she just made each square with random glass. 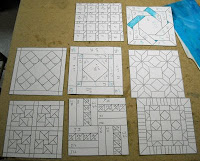 And that's all that happened that was fit to print last week during classes. Next week Fran will be back and we'll get to see the new background for her duck window so come on back and see what else there is to look at when we update this Blog yet again.