We're nearing the end of a number of projects here in the shop. and I have a funny feeling that the next 2 weeks are going to be very busy during classes.

Of course, that doesn't mean that we don't have any completed projects this week though. Cindy wrapped up the soldering job on her last window and after she washed and colored her 3 windows I managed to remember to take a picture of them just before we lost the sunlight outside. Aren't these nice? The funny thing is that this is Cindy's SECOND project but her first to be completed since she had to wait for some glass to come in for her first project. 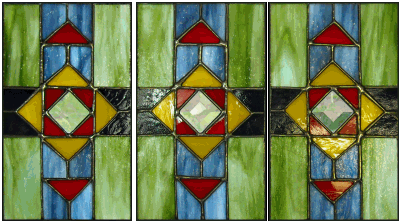 And Roxie had a friend who saw Terry's Pittsburgh Steelers logo here on the Blog and asked Roxie to make a smaller version for him. So this is what she came up with. The picture you're looking at is almost the exact size of her finished project give or take a quarter of an inch or so.

Bonnie is ready to add the border to her Ballerina Slippers Window and that won't take more than a half hour to do. Then she'll solder it and dance them out the door. I like how Bonnie wasn't afraid to but blue into the window. Pink and blue go together so well yet a lot of people are afraid to put blue in a window for a girl. In my opinion it really makes the pink stand out.

Speaking of blue, here's a look at Sonia's window now that it has its border attached and the front almost completely soldered. She deviated a bit from the original pattern when the leaf on the left lost about a 1/4 inch of it's tip. Rather than re-cut it we simply made it touch the border instead of cutting into it (like the sunflower petals do). And there's nothing wrong with that at all. Look to see this one completed in our next Blog update. 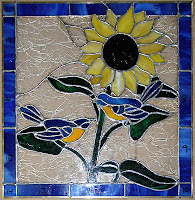 Terry has the center cut for her 1st small beveled window. With the corners attached she'll be cutting straight bevels and a final border for this window during her next class. I'm going to confess that we (Terry, Russ and I) made a miscalculation and forgot to order the end pieces to her bevel centerpiece. Rather than waste a week or more waiting for the pieces to come in we improvised when we discovered a small bevel cluster made of 4 identical pieces that we were able to drop in place for the original bevels. And I'll bet you can't guess which bevels are the replacements because they match perfectly. Sometimes you can still score a goal even on a fumble and this is one of those times. 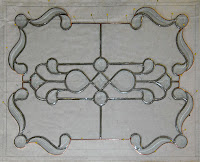 Wow, I really like the way this Boar's Head looks. It's all cut and ground and there are only a few pieces left to wrap before Cindy tacks it together and then adds her final border. This window is just about finished now and I know that Cindy is anxious to get her first (technically her second) project completed.

Patty's Seafood Medley Window (meow!) is really taking shape here. This week she finished up her oysters, her two lemons, and she even had her last piece of corn on the cob. I think that she's down to the seafood now (and once again I'm hungry due to looking at this).

Myrt started the Grape/Cheese and Wine window that she's been talking about doing since the first class she took. I wasn't sure how many purple Globs she had found so the pattern I drew up only had one cluster of grapes but when she came in I saw she easily had enough for 2 clusters so the pattern has been altered to make room for more grapes. This is going to be a nice window but I'm not sure if I want to be around when Myrt cuts the cheese... (groan)

And Myrt also brought in her Fleur De Lis that she cut out while she was home last week. All it needs now is some grinding and then the majority of the work will be completed on this window. It's actually cut from a deep, rich red glass which will really stand out quite nicely when it has a little light behind it. 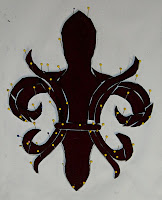 Well then, that's it! We're up to date again and just waiting for our students to arrive on Tuesday, Wednesday and Thursday so we can show you what goes on this week here in the bayou at the Glass Studio.