How to Make Those Windows POP!!!

It's been a while since we last saw someone do a peacock and now that Anita has completed hers Sonia is considering making one also. There's something about peacock windows that I've always liked, maybe it's the fact that you can go hog wild with color if you really want to or you can be more demure and go with a less flashy but equally impressive version of the pattern like Anita did here. You can see that she took the time to cut out a fancy triple border which is NEVER easy to do but in the end she gets to go home with this window.

Fran's been busy while she's been home. She came in this week with these windows all ready for solder and when she left at the end of class they were 100% completed. She's really knocking out these Fleur De Lis windows quickly now and I'll bet she can just about make these with her eyes closed. Next up for Fran will be another one of her duck windows.

Roxie was going to wait and finish all 3 of her Faeries at once but she needed a gift and had this one just about completed so with just a slight change in her scheduling she was able able to finished this one first and then spend the rest of her class working on the last 2 Faeries. People have asked me if I'm spelling the word 'Faeries' wrong in the blog and I just explain that it's more colorful to spell it the Old English, or British, way (Faerie) rather than the American way (Fairy). It just looks classier. Oh, and from the back side you can clearly see this Faerie's arse!

Once the soldering was done Roxie finished wrapping her other 2 sets of wings which means that next week Roxie will be doing some more soldering. I can't wait to see the clear one completed!

Pam was back in this week and she made this suncatcher while she was at home. She brought it in to let me look at it before she soldered it all together and I have to say that she didn't need to wait for my OK on this-- it was perfect! And I might add that her soldering is also!

Once Pam completed the soldering on her hummingbird suncatcher she began cutting out the glass for her next project: A butterfly with Tulips. I like the way she's not afraid to use pins to hold things down as she grinds them! She has the background cut out for this also, but I guess I snapped the picture before the glass was cut. My bad!

And here we have a look at Terry's last clear beveled window. It's all together and just needs some channel and some solder for her to call this job OVER! I think Terry has taken away a lot working on this project. She learned a lot of good stained glass tricks on how to get something squared and centered as well as making windows that match. Like Rosie, Terry will be soldering during her next class! 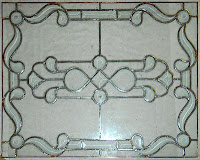 Taking a break from her seafood window, Patty has taken a slight detour into the land of stained glass frames. She needed a gift and she needed a break from tiny pieces so a frame seemed like the way to go. This is pretty much completed since all of the glass is cut and ground. She only needs to tack the final border into place and then attach the hardware behind it before she washes it and colors it. The real beauty of this quick little sidestep is that next week Patty will have a project completed. We all like to be able to bring things home! :-) 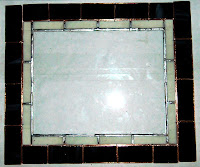 Well now, look at this. Cindy has her window all wrapped and tacked together! She fixed her problem pieces at home and added her border during class where she then began soldering it. I'd say she's on a roll here! Expect to see this completed next week along with the other projects I've already mentioned. Cindy's moving really quickly now and really seems to have the hang of this..

Bonnie has her 2 box tops completed and is ready to make the clear 4 sided bottoms. It's a simple process but tricky the first few times through it. Like anything else it gets easier the more you do it. No matter how tricky the bottoms might be I'd expect Bonnie to have these completed during her next class. They may look sort of plain now but wait until you see them washed up and shiny!

That sums up what happened in our classes during the 1st week of July. If our ISP let's me get on the internet again tomorrow we'll get to look at 3 new butterflies in another blog update. Butterflies mean new students so things will be getting interesting around here with some fresh blood (perhaps even literally!) into the mix here.