We had a short week here due to the 4th of July landing in the middle of our classes but that didn't stop a lot from happening which includes two completed windows.

Patty's Women In A Bathtub Window is all set and ready to hang.  She used iridized globs for the bubbles and although they show up nicely when you see the window in person, they don't really photograph well.  But that doesn't stop this window from looking great.  A "Job Well Done" is certainly in order for Patty. 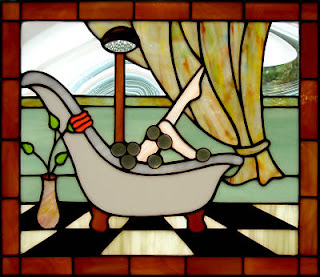 Our second completed window was made by Terry and it's also got some water going on in the subject matter.  Terry's Heron Window looks great and you can even see in the thumbnail below that she's taken the time to dot her eyes.  I remember when Terry was worried that the colors she used for the water and for the birds might be too similar but as you can see there's plenty of contrast and her Herons blend into the water at all. 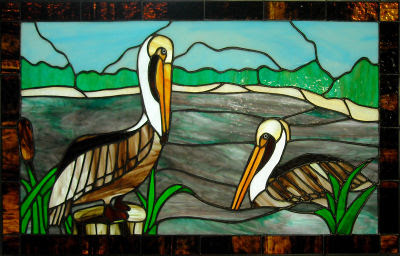 Terry didn't stop there though.  She's also been busy making this very curvy Fleur De Lis Window.  There's not a straight cut in sight on this pattern and when you see this all ground and fitted together you're really going to be surprised with just how graceful and flowing this window actually is.

Bonnie came in expecting to make one or two 3-D Sunflower Lawn Ornaments but after she cut out her pattern she realized that we didn't have the glass she had her heart set on using for the project.  So she started cutting out Butterfly Lawn Ornaments instead.  She's got 3 of them underway here with 1 being completely cut out.  She'll be grinding next week, that's for sure.

Cindy brought the window frame in that she plans on installing her Cow Window into and we both took some measurements and decided that a thin clear textured inner border followed by a thicker red outer border would really look good for this window.  I'd say that this will be completed when Cindy returns but that won't be next week because she's going to be away.  That means we'll have 1 cow, well done, in 2 weeks.

And while she's been making her cow window Cindy has also managed to cut out this Fleur De Lis project.  She's got it all ground and ready for foil so this one should be finished soon as well.  This will be finished as a circular piece and if you've really paid close attention you will have noticed that this is actually the same Fleur De Lis that is in the center of Terry's window as well. 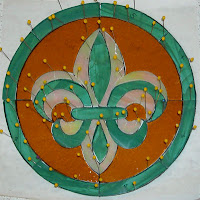 Myrt decided that she wanted to make the Humming Birds, Flowers, and Vines Window that Cindy made a while back.  Alas, she needed it to stand considerably taller than Cindy's was.  Stretching it out would have distorted the design too much so what we did was add 3 more flowers, a few extra leaves as well as an extended vine and we ended up with the pattern that you see below.  Myrt got her birds cut out and will resume the rest of this window during her next class.

Last, but certainly not least, we take a look at Roxie's latest Butterfly Lawn Ornaments.  She came in and got three more completely cut out and a forth started.  That means that next week she'll have 6 of these ready to be ground (unless she decides to cut out any more!) 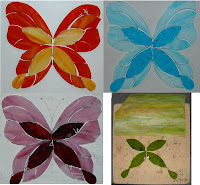 So there you have it.  Everything that was fit to print about what happened here in classes during the first week of July.  See you next week!