If You're Skipping Class You Aren't Cutting Glass

Oddly enough, this is one of those rare weeks when none of our students had completed any projects.  I was wondering what I was going to use as a picture for the announcement email when low and behold Myrt sends me an email of all the crosses she had made while she was at home!  Talk about great timing.  So let's take a look at the seven crosses she completed near the end of May. 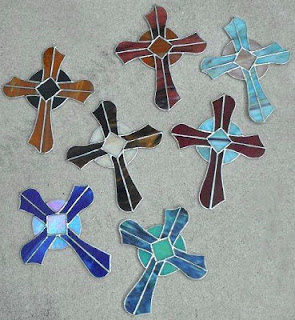 Martha came into her second class knowing that she wanted to make a Dragonfly Window.  She wasn't sure if she could do it as a first project but I convinced her that she'd do just fine making that particular window.  And her cutting of the Dragonfly itself proves that I was correct.  She barely had to grind the wings at all to get them to fit!  The rest of this window, which is all background, will be nice and easy for her. 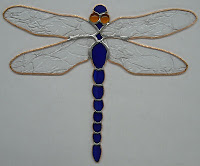 Cindy came in with some grinding to do on her Cow Window and after it was all fitted together she began foiling all of her pieces.  Before she left she had it all wrapped and ready to be tacked.  She's going to be adding a double border on this window and she needs it to fit inside of a wooden frame that she'll bring along with her next week.  Sizing this window will be of the utmost importance.

Well, now that Aubrey has most of her window ground and wrapped she'll be able to tack it together and then cut out the yellow sun that will be setting behind the trees. It already looks amazing so I can't wait to see it with the final pieces all in place.

Meanwhile Lynn finished cutting all of the glass for her first window and has moved over to a grinder to get everything fitted together.  When she comes back in she'll certainly have this all fitted into place and will most likely begin foiling her pieces.  She's moving along wonderfully on this window. and her colors work really well.

Patty has made major progress on this Woman In A Bathtub Window,  She cut it out quickly, she ground it quickly and then she wrapped all the pieces quickly as well.  She added the leaves and the flower last so she could ensure that the stems (which are just cuts in the glass) lined up perfectly with the vase. After she adds a border and some solder this window is going to be finished.  She even has her next pattern lined up so I wouldn't be surprised to see this one out the door within the next 2 weeks. 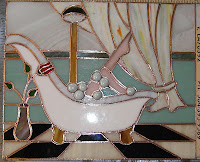 Shelley decided that she wanted to make a Mermaid Window for her project and came up with a few different designs.  This was the nicest pattern by far and the beauty of it is that it's not a difficult design.  She has 24 pieces cut and 29 more to go before she can start grinding this.  I'm going to predict that the remaining 29 pieces will cur much quicker now that Shelley's more sure of her cutting abilities.  Expect to see some grinding started on this when Shelley returns.

Terry's Heron's have been 'borderfied' and now she's ready to rumble solder.  Have you noticed that I called them Egrets last week and now Herons this week?  Truth is I'm not sure what they are aside from pretty.  But do you want to know what I love most about this window?  I love the fact that the land in the background is curved and not just a straight line following the horizon.  I never think of doing that on the patterns that I draw and I think I need to start doing it!  That said, I like the rest of Terry's window just as much as her curved shore line.

And we'll wrap this all up by saying that Sonia's Praying Hands just about complete.  After tacking the hands together she then cut a clear (but rough textured) background glass.  When those 2 large pieces where tacked on to the hands she started looking at various colors for her border.  I thought the light eggshell color worked well but that it was a little plain.  In the end Sonia decided to go with a thin border of the eggshell colored glass and then a thicker green border that pulls its color from the robes.  And, as always, a double border just makes a window look so much more complete than a single border does.  Of course you already know that  I always like a fancy border. 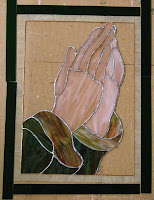 We have another Holiday week coming up so we're going to be missing one of our busiest days (in terms of students) this coming Wednesday.  We'll still have classes on Tuesday and Thursday so expect another post within a week.  Everyone have a GREAT and safe 4th of July!