At the end of each week I start sifting through all of the pictures that I took during our 4 sets of classes.  Thanks to digital photography I usually take at least 5 shots of each project so I can be sure that I'll have a shot that's completely focused, lit and balanced.  Lately I've been having an almost overwhelming amount of photos to sift through and sometimes I agonize about which shot to use but in the end I don't think I could lose-- our students work always overshadows any photographic problems that pop up!

So let's start this update off with Lynn's Seahorse window which really turned out perfect!  From the design straight through to the workmanship, Lynn let us know that she has got what it takes to do amazing work.  And she didn't take the easy way out while making this either.  Little details like the thin pieces that make up the background of the seahorse and the way that the flower cuts deeply into the next piece of glass (requiring a large amount of controlled grinding) all add up to make this a spectacular window.

Terry's windows always generate a large amount of buzz amongst our other students and this Magnolia window shows us that Terry's reputation is well deserved.  Her use of color is always spot on and then when you factor in how quickly she finishes these windows, well, it makes this Magnolia all the more impressive. 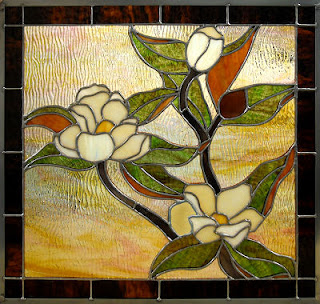 Betty's first window with us was, in her own words, a learning experience.  Her Angel turned out divinely and her skills are top notch.  She's picked up a few helpful hints during the last 4 weeks as well as learning how to make oval borders.  Next up for Betty will be a window with a bit of a Victorian design to it. 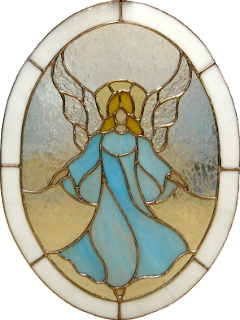 The we have not one but two finished pieces by Jane.  We'll start with this round geometric window that she had cut out and ground when she was in last week.  She took it home having only a border left to cut and as you can see she did a wonderful job cutting that border.  Circles and ovals ALWAYS require extra attention to detail and you can see that Jane paid complete attention to her details.  I also like the use of the small bevel in the center of this piece. 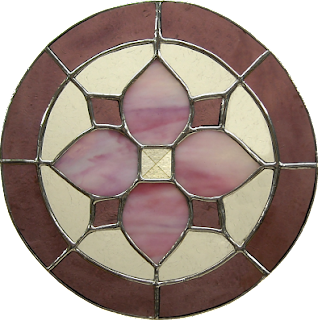 For her second project Jane made this popular variation of our Standard cross which is less symmetrical than most other crosses that you see.  Again, Jane added a bevel in the center of her project and it really adds a touch of elegance to this design. 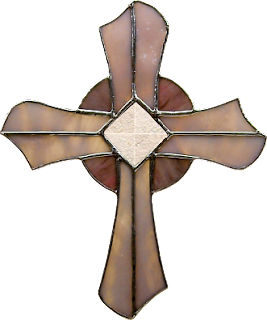 Jane's final project this week is a window that she brought into class already tacked and ready to be background and borderized.   There wasn't room for a stock bevel in this window but Jane was able to put a clear, faceted jewel near the center which lends the same effect.  Expect to see this one completed real soon now!

Brenda had her work cut out for her-- and she did it all by herself!  With the center tacked together and the border ready to be ground and then attached, the work on her latest masterpiece is just about completed.  This pattern actually came into the shop because bonnie wanted the flower used in her Humming Bird Window.  Who would have guess that both Terry and Brenda would end up making the actual window that Bonnie patterned her flowers after.

And speaking of Bonnie, she's been busy as a bee working on two of these Bee Lawn Ornaments.  This is 1 of 2 and she's taken this one home with her so she can have it all wrapped and ready to assemble when she comes in for her next class.  She's going to curve the body on this as well as the wings and I think it's going to be amazing.

Linda planned on cutting out the background glass for her Victorian Stylized window but after thinking it through we've decided to go a different route with this window.  Instead of cutting glass she spent her night at the grinder making sure that everything fit together.  As you can see, she did her job perfectly.  She's taken the pieces home with her and will return with everything wrapped and ready to be tacked together.  Then she will cut the background from the actual pieces that she's assembled and everything will go together much quicker.

Mary Grace decided that for her first project with us she would make a Humming Bird and Flowers Window.  She loved the pattern but wasn't sure if she was biting off more than she could chew.  I didn't think that she was and judging by the amount of work she accomplished in one class I'd say that she's going to make this window look easy. 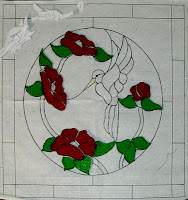 This Tree Frog of Martha's just needs a border and it will be ready for solder.  She decided on a bright Orange to match the eyes and her choice is really going to make this window stand out.  The greens in the frog are all muted colors so currently the only thing vibrant is the frog's eyes.  But when you see this next week you'll be amazed at how colorful it is. 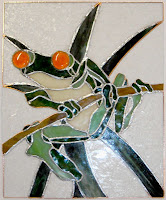 The outside of Patty's Magnolia lamp is soldered and ready for its finishing touches.  And just what do we mean by 'finishing touches' you ask?  Well, she still needs to go over the inside of the lamp with solder.  She won't be putting a bead on the inside like we do the outside but we want all of the foil covered with a neat and even layer of lead.  Once that's done she'll need to apply lead to the bottom edge of the lamp and then wash it!  Yes, this will certainly be completed when she returns to class next week.  Wait until you see it lit up! 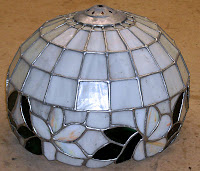 Susan has hidden her window from us under a slew of pins!  And that's a good thing.  Her Fleur De Lis Glove has really begun to take shape now that she's grinding it and her attention to detail is making sure that the outline of the gloves doesn't get lost in all of the dark glass which is much lighter when you see this with light behind it.  All the pins help do two things:  1) they assure that nothing twists out of shape and 2) they leave space for the foil that each piece must be wrapped in. 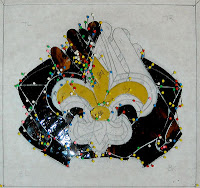 Cindy has been making a ton of smaller items so she could do her first show!  She has more suncatchers, small windows and hand mirrors than you can imagine and she still has this (hand mirror) to complete.  I can't believe how fast she's been working and how much she's accomplished.  I hope it all goes well for her!

Tim's LSU Tiger Eye Windows are now fully cut and wrapped.  It's also easy now to see what I'd been talking about for the past 3 weeks when I'd say that a set of eyes would sit on top of each LSU section.  Tim has done a great job on these and all that's left to be done now is to solder these.

Wow, look at how nice Shelley's Woman In A Tub is coming along!  She only has 11 pieces left to wrap and then she's going to cut the leaves and flower into place ensuring that the stems line up perfectly.  She's also going to add a few bubbles as well but since she took her pieces home to wrap I'd say that the cutting will be completed on this when she returns.  :-) 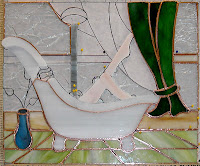 I distinctly recall taking a picture of Myrt's Hot Air Balloon Window but I can't seem to find it anywhere on the camera.  So all I can tell you is that work is progressing on it and this real life Hot Air Balloon is NOT (I repeat: NOT!) in her window.  Myrt has better taste than that... 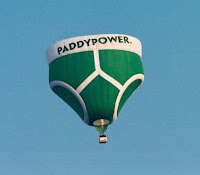 Terry's Magnolia Window wasn't all she accomplished this week.  She also made some major progress on her own Mallard Window as well.  When you go back and look at Brenda's version of this window and compare it to this one that Terry is making you get to see just how colors can change the feel of a window.  You can do a pattern that 20 other people have done before you, but  the colors that you chose will make the window your own. 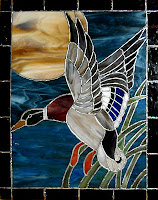 Well, we certainly covered a lot this week.  With full classes we always have a lot to look over and hopefully you'll be inspired (and awe struck!) when you see at all the hard work our students put forth each week in our classes.

(Shelley's Solder Tree)
Posted by Bayou Salé GlassWorks at 12:27 AM